Not peer pressure…it’s all about the boyfriend pressure!  Although I don’t feel out of control which is good.  I decided to eat what I did today.  Dan just made the initial decisions!… 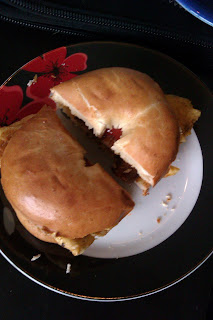 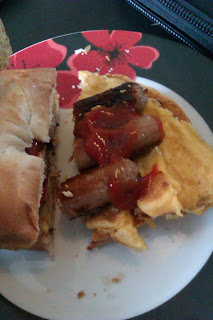 Dan made us a lunch of three skinny chipolatas and a fried egg on a plain bagel. I had a squirt of ketchup with mine and he had a slice of cheese.


We didn’t make it to ParkRun this morning – Dan was still sleeping till gone 8am and we would have needed to have left at 8.  Instead, this afternoon we went for an easy 3.44 mile run round town together.  I felt really good and like I could have completed the 15 miles I have planned for tomorrow, although decided as it was snowing really hard by this point and I had already planned out my run for tomorrow I should probably head back with Dan.
Distance: 3.44 miles
Time: 34m 53s
Calories: 453 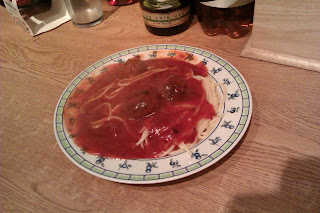 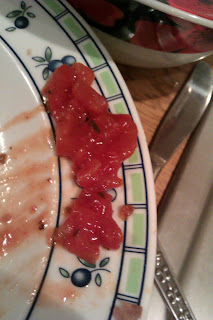 I decided to cook meatballs and spaghetti for tea as it’s a nice quick meal.  I probably put a little too much spaghetti in the pan and I definitely put too much sauce in the pan!  It was a last minute decision to use the rest of the tin.  I was worried that just half of the tin would leave the dish flavourless.  (I made sure the presentation of Dan’s plate looked much nicer than the splodge of sauce on my plate did!)  I still have not trained him to eat his vegetables though!  The picture on the right is the chunks of tomato he has pulled out of the sauce.  So awkward!

Dan and I got together back at the start of 2007 whilst we were both at Staffordshire University and our groups of friends got talking on a night out. After END_OF_DOCUMENT_TOKEN_TO_BE_REPLACED

I have run a number of races since I first started blogging.  I’ve tried to blog about all of the races I’ve entered, and have split them below into the END_OF_DOCUMENT_TOKEN_TO_BE_REPLACED

So who am I?… I’m a 30 year old high school teacher of ICT living in Northamptonshire with my new husband Dan.  We met at Staffordshire University back in 2007 END_OF_DOCUMENT_TOKEN_TO_BE_REPLACED