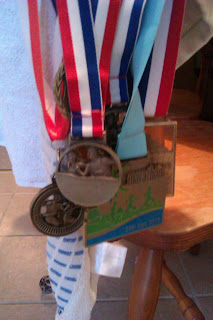 I’m supposed to give an assembly to 310 year 7s this morning on the benefits of using SAMLearning.  I’ve already given the assembly to years 11 and 8 and had spent 4-5 hours making a Powerpoint and video and perfecting my presentation.  Yesterday I was told that there would be nobody to open up the projector box room for the year 7 assembly and I would have to do it without any visual backup aids!  Panic!  Stress!
On my way to bed last night I came up with the idea of using my running medals as a prop.  I’m planning on commenting that I had decided to want to run a marathon.  There was no way I was going to be able to run 26.2 miles straight away with no training, so each day I did a little bit of running, (they should be doing a little bit of revision each day) collecting a few medals along the way (SAMLearning gives you virtual medals for the revision you do) and eventually, last April I was all ready and prepared to take my big challenge – the marathon and gained the award I was after (ultimately their GCSEs in four years time!)  Fingers crossed it goes down well and doesn’t just come across as me shouting out about my running achievements!

Dan and I got together back at the start of 2007 whilst we were both at Staffordshire University and our groups of friends got talking on a night out. After END_OF_DOCUMENT_TOKEN_TO_BE_REPLACED

I have run a number of races since I first started blogging.  I’ve tried to blog about all of the races I’ve entered, and have split them below into the END_OF_DOCUMENT_TOKEN_TO_BE_REPLACED

So who am I?… I’m a 30 year old high school teacher of ICT living in Northamptonshire with my new husband Dan.  We met at Staffordshire University back in 2007 END_OF_DOCUMENT_TOKEN_TO_BE_REPLACED