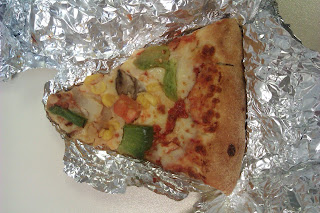 This week I have been really hungry in the build up to lunch time.  Well, pretty much since leaving home in the mornings!  I guess this is due to the reduction of my breakfast meal sizes lately.  I was really not enjoying work earlier on in the year and often put off getting ready for the day by having a bit more at breakfast and staying on the couch.
I managed to wait until 12pm to have the rest of my pizza from last night and then my salad of sugar snap peas, mixed leaves and cherry tomatoes with ceasar dressing at lunchtime. 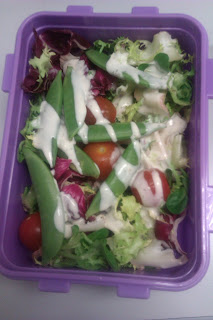 It was a pretty busy day with lots of teaching followed by a fully booked year 8 parents evening from 4:30-7.  I had little voice left afterwards and was REALLY thirsty!
When I first started at the school they used to put on a range of bread rolls, different muffins and a glass of orange juice for everybody.  This year, they started providing a cooked meal (because it works out much cheaper and they can get away with serving on tiny trays that actually only hold three tablespoons of a dish!)  The first meal they served us was a curry heavy on onions.  The second meal contained a slice of garlic bread.  Luckily people spoke up and the meals have not been quite so smelly since!  We have to spend nearly three hours talking politely to parents…much nicer when not letting garlic spread through the air towards them!!! 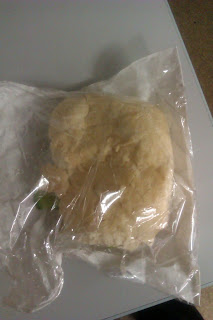 Tonight though, the meal was lamb roulash.  I’m not a massive fan of meat anyway, especially anything as chewy as lamb.  I asked for the vegetarian option and was told I could get a plate of plain pasta in about 20 minutes and a cup of cheese to go over the top.  Rubbish choice, so I found one of the less hard cheese salad rolls from today’s student stack and nibbled on this instead. 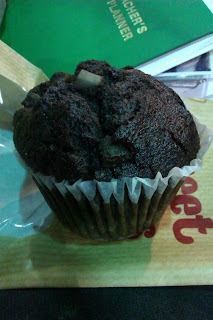 I had my running club committee meeting straight after at 8pm about 45 mins away.  The club secretary always brings in beautiful cakes which large chunks are taken from and munched during the meeting.  I decided, as I would not be able to photograph the wonder of Karen’s cakes and as I had already gone nearly seven hours without anything passing my lips that as I was getting petrol I would pick up a muffin which would prevent me from getting drawn into the cake pile later on.  This worked.  I felt satisfied and in control!

This now means that in the next two years we have a minimum of SEVEN weddings to go to!  This is my calendar for the next three months…


Is it just my age that all of a sudden I’m being invited to so many weddings?!?!
I had forgotten about the upcoming spa day as part of Amy’s wedding.  I am considering starting Jillian’s 30 day shred DVD on Saturday.  I have only heard good things about it.  I will take measurements and pictures on Saturday and try and complete everyday and see how I get on with it. 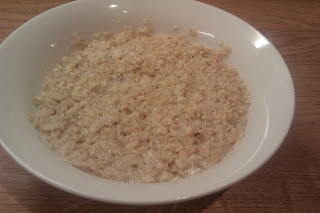 This morning’s breakfast was take 2 of porridge for the week!  I took Maria’s advice and let my porridge soak in milk overnight in the fridge and then cooked as normal this morning with a tad more milk.  She was right, looks a much bigger bowlful and am now nicely full!

Busy day today – parent’s evening after school, followed by running club committee meeting.  It will be a late one tonight especially after packing for Norfolk for tomorrow. 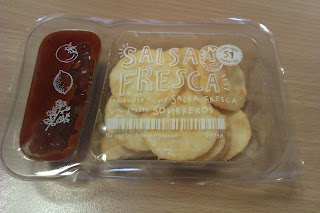 My snack this morning was a Salsa Fresca Graze box.  I do love Graze.  I have a box of four snacks delivered each week and it makes it really easy to grab a snack if I’m in a rush before school in the morning.  This box only has 51 calories in.  Great! 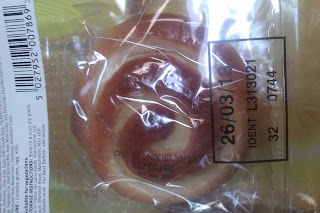 I did sneak a puffy thing with vanilla inside at breaktime from the staffroom though.  Free food always draws me in. 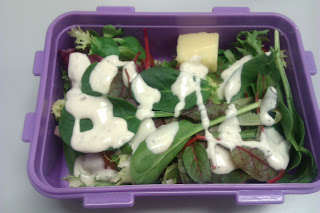 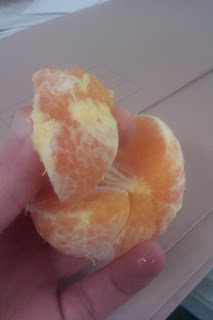 Almost forgot to take a picture of my afternoon snack, but here is the remainder of my tangerine!  My stomach was growling for some reason at 3pm, so I grabbed this then. 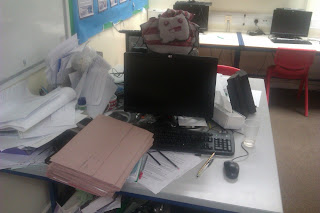 I was supposed to be tidying my desk, although I didn’t get very far this evening!  This is how it started out.  That pile of folders on my desk is just one class of year 7s to mark.  I have four classes that each handed in large homework projects this week that I need to get marked before next week.  It’s going to be a busy weekend!  Hopefully tomorrow I will have an ‘after’ picture that looks much better! 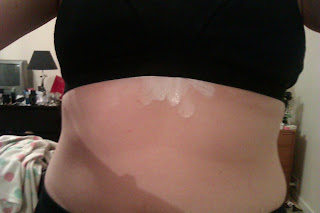 I left tidying and had a meeting at 4:30-5 before driving home to fit in a run before Dan got back.
I have two sports bras.  One was in the wash and the other has been rubbing on the front of my chest recently.  I couldn’t find any vaseline in the house so decided to whack some sudocrem on the front to hopefully stop it rubbing when I got home for a run (it worked!)
I had a really good run again, although didn’t get as far as intended – just 5 miles.  Tonight was supposed to be our night together and I had seen Dan drive past at the start of my run.  I felt a little guilty, as I dont seem to have seen him much just lately again so when my first loop finished at mile 5 I called it a day.
My legs had felt very tired at the beginning of the run, probably due to the speedwork we completed yesterday but I continued with an easy run.  Again, keeping with my recent tradition of not looking at my watch until returning home.  Again, I was surprised at the speed of a run I found easy, especially with such tired legs.
Mile 1: 11:07 (inc warmup)
Mile 2: 10:36
Mile 3: 9:55
Mile 4: 9:35
Mile 5: 9:58

My focus is obviously the upcoming MK marathon, followed by the Shires and Spires Ultra – although I’m not worried about time for this, just completing.  I would then like to complete the Summer season and get some new PBs for the shortest distances.  Fingers crossed! 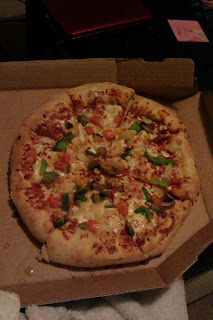 On returning home I said to Dan that I would just grab a quick shower and then start on tea so we could go bowling (our pre-agreed night together).  I had actually been looking forward to tea all day.  I wanted to have another salad wholemeal pitta and experiment in making my first batch of sweet potato chips on the side.  Dan seemed confused though and seemed to think that we had planned both Dominos pizza and bowling.  I don’t remember this!  The other day he had mentioned that we hadn’t had takeaway pizza for about five years and I had suggested that one week we would have that as our night together.  I just didn’t think he’d assumed the same night as bowling!
He went off to get two medium pizzas while I grabbed a shower.  I had the veggie supreme to still get lots of vegetables in.  I didn’t eat all of the pizza.  Last year I would have sat there until I finished but I’m proud of myself for stopping (although probably should have stopped a little earlier!) and now have some leftovers for lunch tomorrow.
We didn’t get to bowling.  I was too tired in the end, but instead we curled up on the couch together and chatted, and watched a bit of QI on TV.  Much better than going bowling!

Dan and I got together back at the start of 2007 whilst we were both at Staffordshire University and our groups of friends got talking on a night out. After END_OF_DOCUMENT_TOKEN_TO_BE_REPLACED

I have run a number of races since I first started blogging.  I’ve tried to blog about all of the races I’ve entered, and have split them below into the END_OF_DOCUMENT_TOKEN_TO_BE_REPLACED

So who am I?… I’m a 30 year old high school teacher of ICT living in Northamptonshire with my new husband Dan.  We met at Staffordshire University back in 2007 END_OF_DOCUMENT_TOKEN_TO_BE_REPLACED