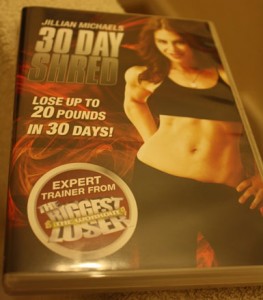 So last night I began the 30 Day Shred after hearing nothing but good things about it!  My starting measurements are as follows…

Lunch today was a wholemeal pitta filled with cherry tomatoes, a ham and egg slice and some carrot sticks.  Rather mismatched, but tasty all the same.  I was waiting for the tomatoes to squeeze out of the side as I had been too lazy to cut them first but luckily this didn’t happen (even though my workmates sidled away from me when I announced that I was putting them in my pitta whole! 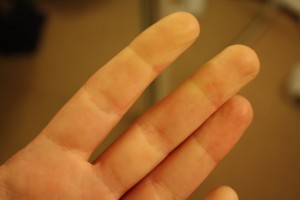 It’s hard to tell from a photo, but my fingers started to go completely numb again this evening after work.  You can slightly see a whitey/yellowish tinge in this photo here on my index finger.  I’m not sure why they keep doing this but it was the same finger again as last time.  I need to go to the doctors during the Easter holidays anyway so will bring this up then. 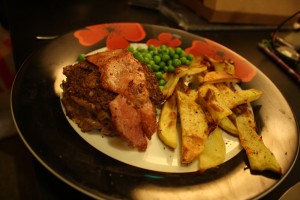 Feeling like I’ve still not really spent much time with Dan lately so I decided not to go to running club tonight, but instead do my 30 day vid when I got home from work and a quick tidy up before spending some time with my man!  He treated me to an experimental dinner tonight after my few experimental meals just lately!  He put together a beef patty, with cheddar inside and topped with a bacon rasher.  He made his own chips, not using oil and flavoured with cajon seasoning with a side of peas!  Yum!

Dan and I got together back at the start of 2007 whilst we were both at Staffordshire University and our groups of friends got talking on a night out. After END_OF_DOCUMENT_TOKEN_TO_BE_REPLACED

I have run a number of races since I first started blogging.  I’ve tried to blog about all of the races I’ve entered, and have split them below into the END_OF_DOCUMENT_TOKEN_TO_BE_REPLACED

So who am I?… I’m a 30 year old high school teacher of ICT living in Northamptonshire with my new husband Dan.  We met at Staffordshire University back in 2007 END_OF_DOCUMENT_TOKEN_TO_BE_REPLACED