The aim of today was to get a million items ticket off my to-do-list before bed! 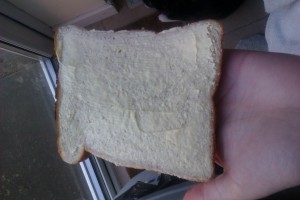 After blogging this morning I grabbed a slice of bread and butter and a pint of water before getting changed for a run.  The aim was initially a steady 6.8 miles, but this ended up as 4.65 miles instead.  It was a lovely day for a run…really sunny out and I decided on a t-shirt for one of the first times this year.  It was mega hot out and I wish I had also decided on shorts as well as the t-shirt!  By mile 1.8 the sweat was pouring off of me.  I didn’t seem to have any energy and I knew that I would struggle to maintain my pace for any distance.

I walked for about 1/10th of a mile before settling back into a slower run and deciding to do an out of back of about miles instead.  My 6.8 would have finished on a steep hill and I’m not sure my body would have co-operated today.  I’m not sure if it was because I didn’t have a proper breakfast before the run today, because I had had a four day break from running, because of the sudden heat wave or because I had just had a visit from Aunty Flo (my friend refers to it as this all the time!) but whatever it was I decided that my body probably knew best and agreed not to push it today.

Breakfast was imagined in my mind all of the returning journey!  I wanted to make some proper American style pancakes a while back but they had turned out more English-style as I didn’t have any baking powder.  A couple of weekends ago I picked up another pot of baking powder but had never gotten round to making the pancakes again.  This morning, I did!  I had a nice big thick pancake with blueberries and strawberry slices in.  It was very thick and light – perfect American pancake texture!  I don’t like syrup or anything on my pancakes and I felt that there weren’t enough pieces of fruit in this pancake for my liking.  After eating my pancake breakfast, I mixed some more fruit pieces into the remaining batter and cooked another pancake ready for my breakfast tomorrow.  I’m looking forward to it already! 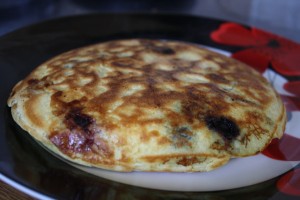 One of the items on my to-do-list for today was to control my uncontrollable hedge at the bottom of the garden!… 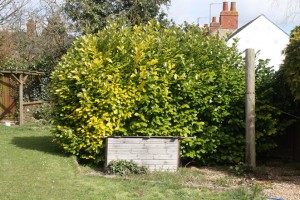 After a good attempt at hedge control (but not quite completing the job as I wasn’t tall enough to reach the branches at the top in the middle) I headed to the Co-op to pick up some of the items for one of my favourite all-time meals…mozerella and tomato pesto salad.  YUM!!!  I also picked up a crusty bread roll to have on the side.  Complimented the dish perfectly.  This was one of my favourite dishes from my working at Frankie & Benny’s days.  It was there I was introduced to the wonder of pesto! 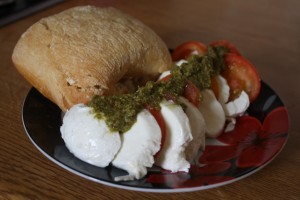 I also have something yummy and yet again vegetarian planned for tea!  Can’t wait!

I think Dad was a bit disappointed yesterday morning when he brought home a cheese topped roll and a croissant and tried to force feed them to me but I turned him down.  So I ate these for breakfast this morning. 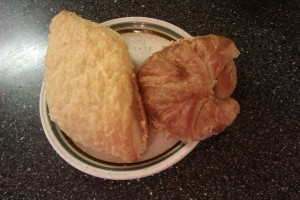 Busy day of plans, involving meeting up with my bestie Hollie for a catchup at 9am.  Her son Tom is now nearly 18 months and has started drawing.  He is mega cute.  I am not in any way a baby fan.  I haven’t even touched Dan’s year old nephew, let alone held him!  But I am fond of kids. 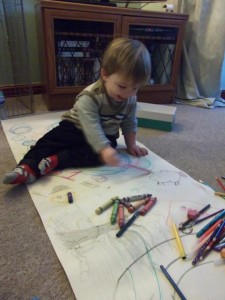 Dad picked me up from Hol’s at 10:40 and we headed through to an auction near to Hunstanton.  I have always, always said that my Dad and his brother are very much Rodney and Delboy and they are both forever finding ‘great deals’ that they couldn’t pass up!  When I was eight my uncle actually bought out a video store and had over 1000 videos in his shed for years which he gradually sold on!  This was great, cos each week me and my brother would go round and pick two movies each to take home and watch.  Beethoven was always my favourite! 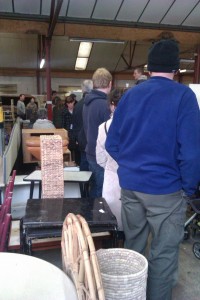 Dad treated me to a lunch of a cheese salad roll and a slice of chocolate cake.  The roll was really nice and freshly made, as was the cake. 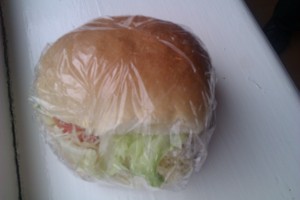 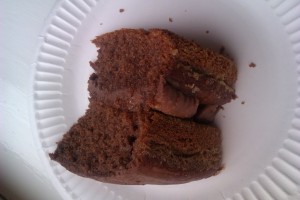 We then spent about three hours waiting for a bed Dad liked the look of to come up, and in the end, Dad won it for £28.  It was a bargain as it looked pretty much new. 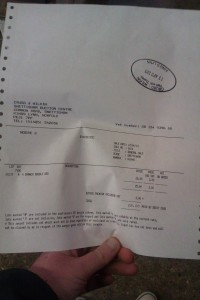 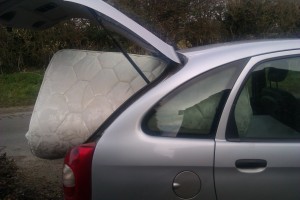 Unfortunately it didn’t all fit in the car so we ended up loading the two halves of the bed into the car and leaving the mattress in the auction house to come back for later.  We drove through to my Aunt’s house near Kings Lynn and watered her plants and collected her mail.  She went into Miami rehab center about six weeks ago so Dad has been collecting her mail, shopping and visiting her each week since.  We left half of the bed at my Aunt’s house and then headed through to see her for a little while.  On the way home we picked up the mattress and stored this at my Great Aunt’s house next door when we finally got back!  The only problem with Dad (and Me!) being a hoarder is that you run out of space very quickly!  Dad has already built himself a shed bigger than a double garage at the top of the garden for all of his random purchases!

For dinner Mum had cooked up a lovely meal of brocolli, carrots, butternut squash and salmon.  I did also add some cheese sauce to this plate after I’d snapped a pic.  She had added the squash remembering that I had mentioned wanting to try it the other day. 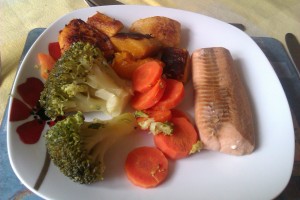 For dessert Dad whipped up some custard and we each had a slice of the blackberry pie I brought home from the sale on Thursday.  Very filling meal.  Again I downed about 5 pints of water (no exaggeration!) over dinner and was feeling it afterwards!

I suggested we all take Blue for a walk at the dog fields nearby.  Unfortunately he got rather excited in the car and bit through his lead.  Oops!  It literally took him just one chomp and he was through it!  It felt good to have a walk around after the big dinner.  My foot is feeling so much now and I’m glad I took the couple of days off from running to let it recover from the start of the week.  Hopefully when I go for my runs Saturday and Sunday I will be feeling strong again and pain free enough for a good run. 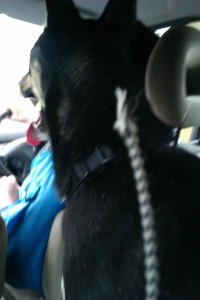 Dad brought out a chocolate bar for me to snack on on the way home.  This was quite nice actually.  Apparentally he bought it from Lidl and it was thick, rich but not too overbearing and sickly. 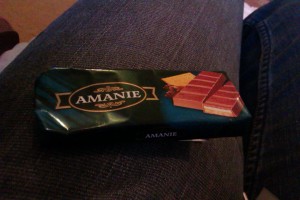 It was good to get home and see Bella last night but Dan is now away for the footy and a friend’s birthday until Sunday so I missed seeing him last night.  Today is going to be a busy day of getting things done whilst I’m on my own in the house though I’ve decided…

Dan and I got together back at the start of 2007 whilst we were both at Staffordshire University and our groups of friends got talking on a night out. After END_OF_DOCUMENT_TOKEN_TO_BE_REPLACED

I have run a number of races since I first started blogging.  I’ve tried to blog about all of the races I’ve entered, and have split them below into the END_OF_DOCUMENT_TOKEN_TO_BE_REPLACED

So who am I?… I’m a 30 year old high school teacher of ICT living in Northamptonshire with my new husband Dan.  We met at Staffordshire University back in 2007 END_OF_DOCUMENT_TOKEN_TO_BE_REPLACED