I don’t like how long my posts have been…I get bored…I’m sure other people get bored!…The aim for the future is to break my day down into at least two…here’s the first part of today…

Breakfast was my new routine of fruit, cereal and low-fat yoghurt.  I pulled some raspberries out of the freezer, a few more pineapple chunks and on the bottom of my little conconction were some blueberry wheats.  The raspberries were very sour and could probably have done with something a little sweeter to take off the edge.  The blueberry wheats were a little dry without the milk as well.  I shall be returning to my Jordan’s crunch mix after my shopping trip tonight. 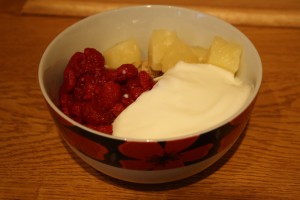 The Healthy sELF challenge for today is to ‘track your water consumption’.  I had two half pint glasses before leaving for work and then filled up this bad boy with the aim of finishing it by the end of work.  I shall work out my total consumption at the end of the day and let you know tomorrow morning. 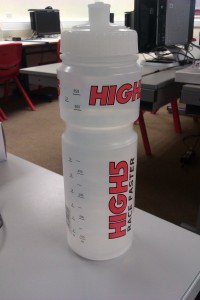 At breaktime I grabbed a Graze box – Oven roasted salt and vinegar nut selection.  This with several swigs of water held off my hunger until lunchtime. 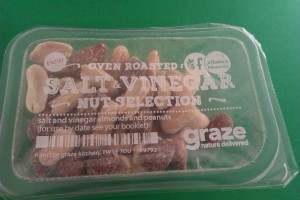 Lunch was a colourful salad.  I am really into my salads right now and plan on picking up some more tasty salad ingredients at Tesco tonight!  This salad had lettuce, grapes, two large tomatoes and two eggs turned scrambled quickly in my new-found-way of doing so…the microwave! 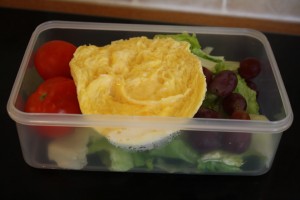 I felt the need to have a little something sweet in the afternoon before my final lesson.  I opened up this Graze box, knowing full well that I only liked the chocolate chips inside, but the few small chocolate drops were just what I needed to keep me going until run club tonight! 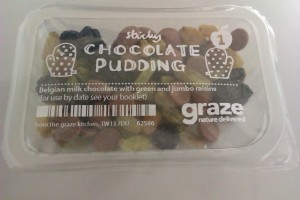 By the end of the school I felt comfortably content with the contents in my stomach.  On Tuesday I had felt bloated and too full before club and if we had been out on a long run Tuesday I would either a) have been sick b) rushed into a pub for a loo stop mid-run or c) missed club altogether for fear of either a or b happening!

At the end of school today I had to give back my form group’s trophy which they won for being so wonderful and making the most money for charity last year…it has been displayed with pride in my form room for the past two terms…I don’t think we’ll be getting it back this year though!  As year 10s, they seem to be all over the place this year! 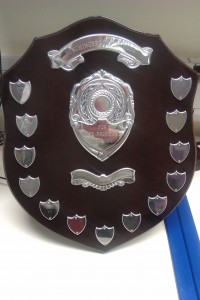 The kids in my form have been on about How Animals Eat Their Food quite a bit just lately.  I’d not heard of it before.  Dan has just shown me the YouTube video which did make me laugh!  When did I get so old that I don’t know the cool YouTube videos anymore?!

This video isn’t cool though.  This one is pretty scary.  It’s from the BBC News website and shows a man in his car a VERY long way away from the fire in Texas before the explosion this morning…and then the actual explosion.  I cannot get over how far that explosion went.  Very scary.

During my year 10 class that morning the kids were talking about a ‘Fat app’.  I’ve not seen it before but apparentally you take a picture with your phone and it makes you look obese.

Whilst talking about it another year 10 excitedly shouted out “You should take a picture of Miss!” I declined, pointing out that I was already fat………………………………….Cue DEAD AWKWARD SLIENCE from the whole class!  I changed the subject after this!

Later on in a departmental meeting my Head of Department was telling us all about a student in his form that has recently been chosen to bike for Gt Britain.  He pointed out that the student was quite like me – a bit overweight but could hold her own for a long period of time and would often be out on the bike for 50+ miles before calling her parents to let them know where she was.

Two more reasons right there to get my butt in gear and work this arse off!

Morning breakfast was the remainder of my strawbery crunch cereal topped with some pineapple chunks and a few large spoonfuls of low-fat plain yoghurt.  l used to be OBSESSED with pineapple chunks when I was at high school and they were one of my favourite foods for a long while.  I’ve not had them for ages though and had forgotten how good they were! 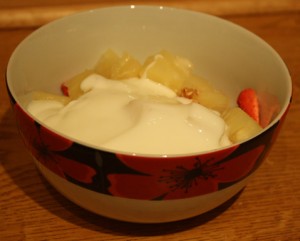 Because I got up at the crazy time of 3:45am!!! to re-write the 93 year 7 reports that the system lost over the holidays I did not have time to throw together a lunch so lived on a lunch of Graze boxes today.  I definitely noticed that I had not had lunch though and my belly was rumbling by the end of the day!  MUST REMEMBER TO ALWAYS PACK A LUNCH!!!

Mid morning I grabbed a Tomato Dipinetta box.  This was stressed eating as I was still desperately trying to finish my reports off as quickly as possible.  I either eat or chew my hair when I’m trying to get something done quickly.  Both HORRIBLE habits that will be coming up in my Friday Focus’ soon! 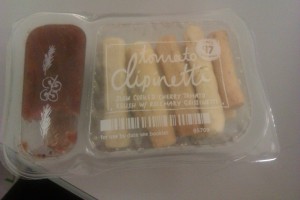 At lunch time I grabbed a box of After Dinner Mints despite not liking the peppermint raisins.  I’m pretty sure Graze sent me these as a mistake as I have removed all raisins/currants/sultanas items from my wish list on the website.  They sent me two boxes one week though so I’m guessing one was a mistake.  The dark chocolate chips ended up nice and minty tasting though which was nice! 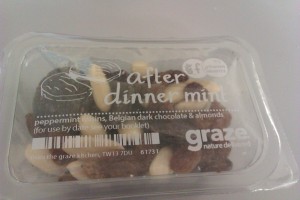 I also grabbed a tangerine.  I always go through phases of tangerines.  I’ve not had very many lately and know I will refresh my relationship with them over the next couple of weeks again! 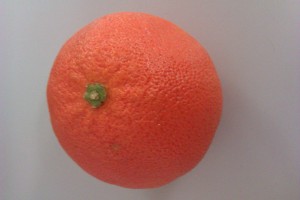 Mid afternoon, after the stress of completing my reports was over and all reports ticked off the list AGAIN I grabbed a Pina Colada box.  I was tempted to grab another box after school as my tummy was really rumbling by this point, but knew I would do better to wait for a proper meal by then. 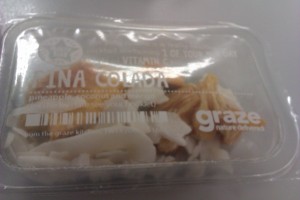 We arrived home to find no Bella at the door to greet us.  She ALWAYS sits at the bedroom window waiting for our return from work in the evening and then rushes down to greet us while we unlock the door.  I started to get a little worried, but there was no need to…she was taking her time stretching after what looked like a very comfortable and lazy nap she’d been having on our bed! 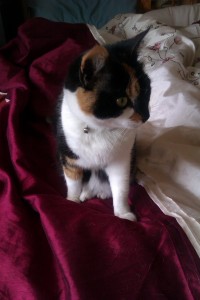 As Dan had missed breakfast and I had missed a proper lunch on the drive home we concocted a large meal for tea tonight.  Dan wanted garlic bread.  I decided on the remaining turkey escalopes and then I hunted in the fridge to find some salad items to complete my meal while chips accompanied Dan’s meal.  I added lettuce, grapes, tomatoes, a few peas and the remainder of the blue cheese dressing from Sunday night.  I was glad that I made the extra effort to have the salad with my meal.  I gave Dan some peas with his to get at least one of his five-a-day in and topped my salad with a couple too.  In the past I’ve just been too lazy and added chips to my meals when I make them for Dan.  I don’t even like chips!  I need to make this effort more often as I really enjoyed my side salad! 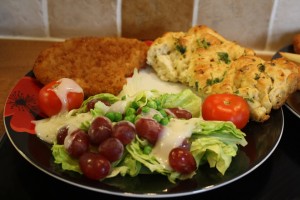 Sky has several choices of Disney movie to watch online at the moment so we settled on the couch and put on Honey I Shrunk the Kids! with a bowl of popcorn to share.  I’ve not seen this film in a very long while and had forgotten all of the bits which made me laugh.  I can’t believe it was made in 1989!  That makes me feel so old.  My brother and I used to watch this film all the time! 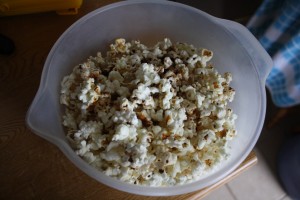 My intention had been to run when I got home from work tonight but something in the lunging exercises before our sprint session on Tuesday night has really destroyed my bum so I settled on a little light walking instead.  Can’t wait to head out for a proper run again at club tonight!

Dan and I got together back at the start of 2007 whilst we were both at Staffordshire University and our groups of friends got talking on a night out. After END_OF_DOCUMENT_TOKEN_TO_BE_REPLACED

I have run a number of races since I first started blogging.  I’ve tried to blog about all of the races I’ve entered, and have split them below into the END_OF_DOCUMENT_TOKEN_TO_BE_REPLACED

So who am I?… I’m a 30 year old high school teacher of ICT living in Northamptonshire with my new husband Dan.  We met at Staffordshire University back in 2007 END_OF_DOCUMENT_TOKEN_TO_BE_REPLACED