If you didn’t read my proposal story Part 1, it is right here!

We decided pretty much straight away that we didn’t want to update statuses on Facebook or text family members, but rather visit them in person so agreed not to tell anybody before both sets of parents knew, although I did post a picture of my ring on Twitter, knowing that nobody I know in real life reads my blog/follows me on Twitter.

We decided to go to the hotel restaurant for dinner and get a bottle of wine with our meals.  What do you do after getting engaged?…CELEBRATE THE ENGAGEMENT!!!

I wasn’t overly hungry so ordered a small mediterranean starter salad, while Dan ordered a steak and we split a garlic bread between us.  I also ate his onion rings, tomato and mushrooms as he is a major salad dodger.  This is the first time when I have ordered a starter as my meal and the waitress that brought my meal out has said “Were you just really not hungry tonight?!”  I probably ended up with a larger meal than Dan despite my dish costing £14 less!  We also split a bottle of White Zinfandel wine…my favourite! 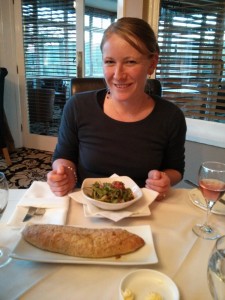 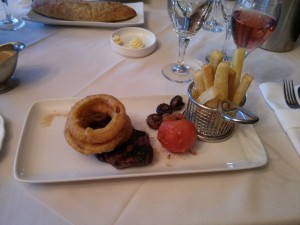 The next morning we lazed around first thing (despite me being awake from 4am…there was just too much to think about!) – enjoying not having to get up at any certain time.  When we headed down for breakfast I was really craving a Full English, so made the most of the buffet and added some baked beans, a sausage, mushrooms, hash brown and some scrambled egg to my plate. 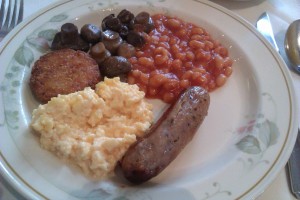 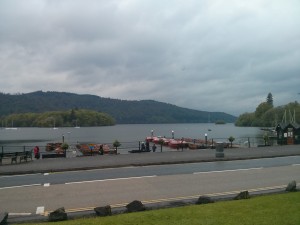 Grey skies, lots of rain, and a deserted lakeside!  So I got lazy with my hair and threw it into a wet french plait.  This is often how I wear my hair for school as it doesn’t take long to do and I can let it dry throughout the morning like this.  I’d never seen my hair from the back so Dan offered to take a picture of it…I was impressed with myself! 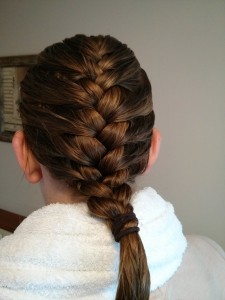 To stay active, and away from the constant rain, we headed to the hotel pool for a few hours and alternated between swimming, splashing each other, relaxing in the jacuzzi and sweltering in the sauna.

On the way to the restaurant on the first day I had spotted a cute little Tapas bar, Bodega, a few roads away that I wanted to try out.  I love tapas and the idea of choosing lots of little dishes and sharing mini meals when you’re not necessarily very hungry suits my style of eating just fine!

We each chose one main dish and then between us shared three little ones.  Dan chose Croquetas – Lightly breaded chicken croquettes.  I chose Pisto – Mediterranean vegetables in a tomato sauce served with slices of toasted baguette.  Between us we shared Pan al la Catalana – Plain toasted bread with Catalan tomato and garlic dipping sauce, Atatas Alioli – Potato wedges served with garlic mayo, and Alitas de Pollo – Cajun spiced chicken wings.  We also each grabbed a pint along with our meal.  There was a great choice on the menu, all dishes we tried were lovely, we were served incredibly quickly and the bar-staff were great, very friendly and helpful, clearing our plates as we went along. 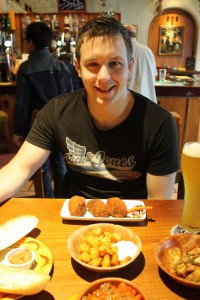 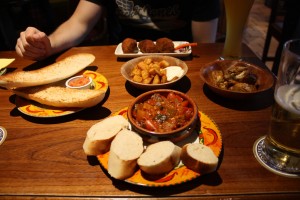 For dessert we tested out the shop which sold 36 flavours of icecream! 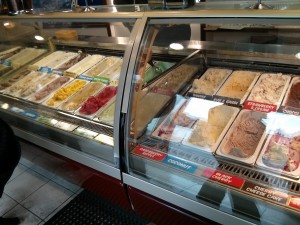 I went for Tiramisu…Dan went for Caramel Crunch! 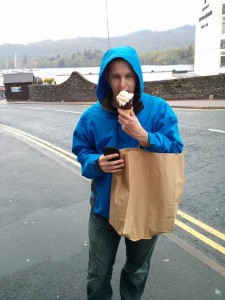 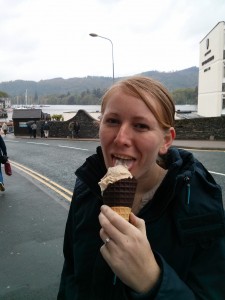 After heading back to our hotelwe lazed around a little for the rest of the afternoon, channel surfing and chatting vague wedding plans.  I like that Dan has lots of ideas in mind.  So many of my friends partners proposed and then let the bride do it all, with no input about what they would like.  Dan and I discussed ideas and luckily we’re on the same thoughtwave with regards to style/choices.

We wanted to go out for dinner but neither of us fancied very much food after the large tapas meal we had had at lunchtime so we left it quite late before heading out.  I pulled my hair out of the plait just before leaving, which gave it this smooth wavy effect.  It was still a little damp but dried quickly before we left. 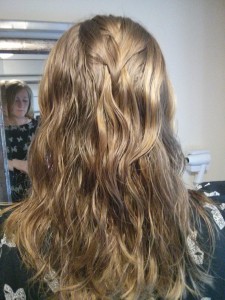 Dan got this really weird ale that I’d not seen before.  It came on a little wooden platter with a spot for the ale bottle, a hole for the ale glass and a hole for a smaller glass.  You were supposed to pour the ale really slowly into the glass until you reached the bottom 10% of the bottle, which you poured into the smaller glass.  This was mainly concentrated yeast, which you could then either shot on it’s own, leave entirely, or add to your pint.  Dan chose to add it to his pint. 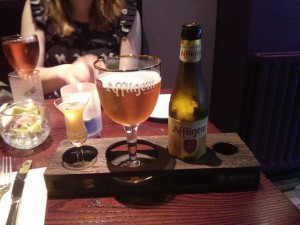 After some deliberation, we both chose from the starter menu and Dan chose some spicy cajun wedges, which were EXTREMELY spicy!  They came with a gorgeous garlic mayo dip.  I plumped for the goats cheese and caramelised onion salad with a slice of bread (I can not get enough bread this week!)  Both meals were the perfect size for our hunger! 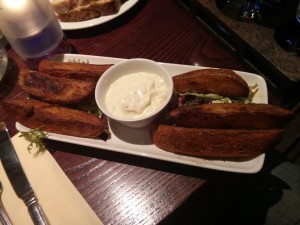 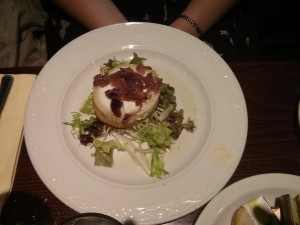 Our food choices prompted lots of talk over wedding meals…Dan would like steak, but knows I can’t stand it!  I would be happy with a hog roast, or smaller sized meals.  I hate when you go to a wedding but are too sleepy after the meal to dance properly!  We also came up with the idea of offering a choice for each course of a Dan-inspired dish and a Mary-inspired dish!  This could work!

We didn’t even need to ask each other where we wanted to head for cocktails this evening…back to Bodega!  The bartender advised us to head for the Latin Rhythm cocktail as soon as we reached the bar, announcing that it contained the best value for money – with the most alcohol for the price.  Should we be offended that we look like the sort of people that are after high alcohol content?!  They were good cocktails though, containing Vodka, Peach Schnapps, Midori and Blue Bols. 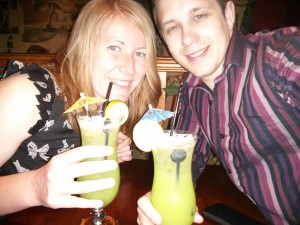 We sat at a booth upstairs, sipping a few cocktails as downstairs was quite crowded.  It was great to relax, knowing that we didn’t have to be at work the next day, that somebody hadn’t just emailed us to update a website or ask for some help with their computers or to not feel guilty for a pile of marking cast into the corner of the room!

The next morning we headed down to breakfast as soon as it opened at 7:30am.  I was boring and had exactly the same as I had the day before!  The intial plan for the day had been to hike up Scafell Pike, one of the peaks from the Three Peaks Challenge.  This had actually been where Dan had planned to propose to me but on checking the weather (frequently!) in the lead up to the weekend he had made impromptu changes to his plan, figuring (correctly) that I probably wouldn’t be up for a romantic picnic in the rain and fog on the side of the peak whilst covered in mud and blisters from the water in my boots!  We left it until the morning to decide our plan of action, as the fog had settled over the lake and we could barely see anything at all even at close distance by this point.  The rain still hadn’t stopped after breakfast, although by now it was a slow drizzle more than anything else, so instead we adapted our plan and dressed in our waterproofs before heading on a two mile trek around the lake instead! 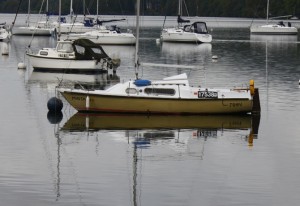 This is one of the boats I thought was rather cool whilst on our walk…the boat was called ‘Mustard’, the owner was called ‘John’, with a little arrow to where he would stand when on board!  I want this boat!

This was the Perfect proposal weekend!

Dan and I got together back at the start of 2007 whilst we were both at Staffordshire University and our groups of friends got talking on a night out. After END_OF_DOCUMENT_TOKEN_TO_BE_REPLACED

I have run a number of races since I first started blogging.  I’ve tried to blog about all of the races I’ve entered, and have split them below into the END_OF_DOCUMENT_TOKEN_TO_BE_REPLACED

So who am I?… I’m a 30 year old high school teacher of ICT living in Northamptonshire with my new husband Dan.  We met at Staffordshire University back in 2007 END_OF_DOCUMENT_TOKEN_TO_BE_REPLACED