One of my favourite bloggers is Cori, over at Olive To Run.  Go check out her Would you Rather Running Style Survey and join in the fun!  It was also her birthday yesterday, so wish her a happy birthday whilst you are there!

Would you rather… Be dressed up like a Zombie for a race OR be chased by a Zombie during a race?

I think both would be amazing!  If I wasn’t racing Mablethorpe marathon the following day I would have signed up for Zombie Evacuation months ago!

Would you rather… train with Chuck Norris or train with Arnold Schwarzenegger?

It’s all about Arnie.  I am a Terminator II fan.  Chuck Norris just doesn’t compare!

Would you rather…Get stuck in an elevator after a race with other people and have to pee or get stuck in a port-a-potty at your race?

I would NOT want to get stuck in a port-a-potty at the race.  I’m guessing that that would mean that I would miss my race, it would stink, there would probably be wee on the floor and the chance that the port-a-potty would blow over in the wind revealing my bare bum.  I think I’ll take my chances jiggiling in a lift thanks!

Would you rather… drink milk as you run your race or drink soda/pop?

Milk as I run!  Although flat coke is supposed to be very good for picking you up towards the end of a race I don’t like how sweet it is and I always crave milk when I get back from a run so I’ll go with that!

Would you rather… puke all the way down the front of yourself during a race or have someone ELSE puke on your foot?

If it was just my foot I could handle it.  My foot has a trainer on right?  I’m hoping it’s just a little bit and no-one would see.  If it was all the way down my front it would probably spoil my race photos, although might make people move out of my path giving me an advantage?…I’m gonna stick with the puke on my foot though I think.

I’m 5’8 and always wanted to be shorter when I was younger.  I wished for it every birthday!  (I’d like to point out that I wasn’t 5’8 when I was younger.  Although still freakishly tall for my age!)  Although 2’8 is quite a lot shorter I would blend into the crowds, whereas, it I was 8’8 I would probably stoop a lot and not fit through any doors.  Are my legs long with my increased height?  If I could guarantee winning a few races I might go for the extra height!

Would you rather… sing call me maybe on repeat during a race OR do the macarena the entire race?

Where is the chaffing occuring?  This is a very important factor.  Strangely though I think I’d prefer the blood to the snot rocket.  Snot is more slimey.

Would you rather… receive a beautiful, shiny medal at the end of your race OR have the race organizers donate $100 to a charity after you finish a race?

I love medals, especially the amazing Grim Reaper medal, but if that much money was going to be donated to charity I would definitely opt for that option.

Would you rather… “hit the wall” halfway through your race distance and struggle the rest of the way OR get close to the end feeling great the whole time but end up having to DNF?

No more DNFs!  I will get round no matter what.  Even if I have to drag that wall behind me the whole way!

Now, go check out Olive To Run and answer the questions too!

GAH!  I was allowed out for a 30min easy run yesterday evening to see how my hip was feeling.  My hip was great!  Didn’t feel any of the problems that I could feel at the weekend, but ten minutes into the run I started to feel a little twinge in my right glute, and although I could then feel this for the rest of my run it wasn’t really restricting my running, or causing me any real pain.  It felt AMAZING to be running again.  How did I get so addicted all of a sudden?  I’ve always enjoyed running, but the past few months I have been really addicted and have missed running properly the past few days.  I emailed Nick and Phoebe to keep them updated and they encouraged me to take another rest day today with lots of stretching and bum massaging before testing the waters with a 45 minute easy run tomorrow.

To keep my mind off of not running during the day yesterday we headed out to Beckworth Emporium for some lunch.  Laura from club snapped this picture of her amazing dinner there the other day and I had to go and check it out for myself. 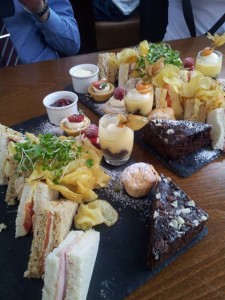 Although when we got there, Dan decided that it contained too many salady items for him and that he wouldn’t share it with me.

Yes, I am trying to live healthily whilst dating a salad-dodger.  It is incredibly difficult, but usually means I get to munch on his side-salads whenever we eat out!  And him not sharing with me means that I have an excuse to visit again sometime soon with someone else!  Anyone wanna come visit?! 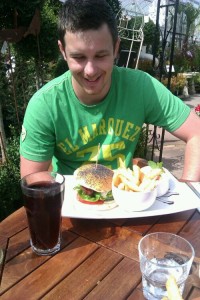 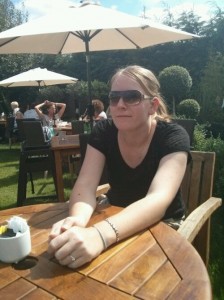 It was a lovely sunny day yesterday so we got a table outside for our lunch and I decided on a mozzerella, chicken and pesto panini in the end, which I then promptly swapped the chicken for Dan’s side-salad.  (I definitely had the better deal!) 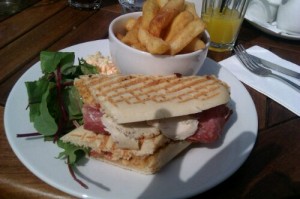 After lunch we wandered around the Emporium for a bit.  It has some lovely quirky housey/garden items, flowers and farm shop items and if I had the money I could spend a lot in there!

I thought it was rather quirky how you could buy frozen vegetables by the bag.  You put the number you want in a clear bag, get them weighed and then purchase them at the checkout.  You could even buy yorkshire puds this way!  It was the grilled and roasting vegetables I was most interested in though. 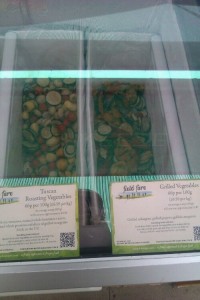 We also took some pictures of yellow/orangey flowers that are possibles for using in our wedding next year. 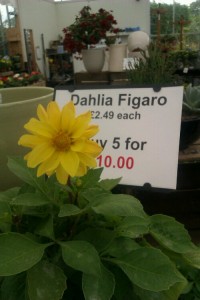 All next to their price tags, so we remember the names of the plants!

I got this email from Dan on Tuesday night.  NOT the sort of email you want to be receiving from your future husband!  Luckily, STD also stands for Save the Date and this was our finished design for our postcards!  We had finished designing and ordering our Save The Date cards from Zazzle.  We ordered 60 Postcards which came to £36 in total.  We decided on postcards mainly due to cost in the end, although considered lots of other elaborate ideas along the way! 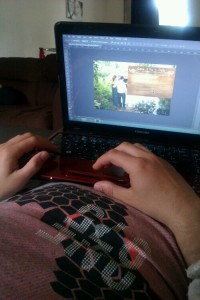 I’m hoping they will arrive soon.  Wedding planning has taken my mind off of not being able to run over the past few days and we are heading down to London tomorrow afternoon to catch up with uni friends so would be able to hand out lots of them there.  Almost a quarter of our wedding guests will be there!

Dan and I got together back at the start of 2007 whilst we were both at Staffordshire University and our groups of friends got talking on a night out. After END_OF_DOCUMENT_TOKEN_TO_BE_REPLACED

I have run a number of races since I first started blogging.  I’ve tried to blog about all of the races I’ve entered, and have split them below into the END_OF_DOCUMENT_TOKEN_TO_BE_REPLACED

So who am I?… I’m a 30 year old high school teacher of ICT living in Northamptonshire with my new husband Dan.  We met at Staffordshire University back in 2007 END_OF_DOCUMENT_TOKEN_TO_BE_REPLACED