I didn’t post yesterday because I was feeling rather bitter about my lack of running just lately.  Check out my blog post over on the Women’s Running website as evidence of that!  I should not write when grumpy!

However, I visited Paul, of Physio & Therapy at lunchtime and my right glute was prodded, poked and pushed around and enough investigating was done to reassure me and Paul that I would be back to training again soon and that the ten weeks until the Dusk ’til Dawn ultra was still plenty of time!  Initially he was worried that there was something wrong with my hip,which would require having injections in order to be able to get back to my running, but that wasn’t the case and the pain stemed from my glute.

This was my first trip to a physio.  I’ve heard many people talk in the past about the pain of sports massages and physios but I assumed I would be fine.  I’ve got a tattoo, I’ve been knocked off my bike onto the road, I’ve fallen off horses numerous times, including one time when the shire horse I was riding fell on top of me, rolled over me and used his hooves in my side as a kick start to push himself back up again.  These were nothing though.  The pain of yesterday morning comes above all of those, coming only second to the time I was admitted to hospital with gaulstones.

I didn’t know my body bent in such places.  Well, it didn’t really because it rejected those poses repeatedly, screaming out in pain to me!  I tried to have a conversation with Paul whilst on the table, but I found myself forgetting the end of my sentences whilst doing my best not to a) cry or b) drag myself off the desk and refuse to be seen again in a sulk.

Whilst running on the treadmill, Paul discovered that I appeared to have a shorter left leg, which in turn overworked my right glute.  On closer inspection whilst back on the table upstairs I didn’t have a shorter leg, but when he added a heel raise and I ran on the treadmill again, my pelvis became more level so we are going to work with this for the time being to see how things go.

I feel like a teenager checking for a tan and have been checking my bum cheek out in the mirror every hour, sure that it will have turned black with bruises.  So far, this is not the case, although it is not the most comfortable to sit on right now! 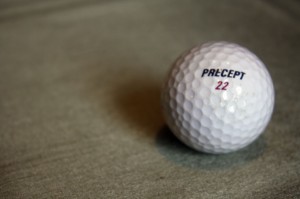 I have been told that this golf ball is to become even more my friend from two days time as I use it to massage my glute further and my glute exercises and core stretches are to continue more than ever now.

I also need to continue mimicing my training plan over the next few days but through a different form of exercise – not running – so have some different plans for this week.  Pop back later to see what I have planned for today!

Dan and I got together back at the start of 2007 whilst we were both at Staffordshire University and our groups of friends got talking on a night out. After END_OF_DOCUMENT_TOKEN_TO_BE_REPLACED

I have run a number of races since I first started blogging.  I’ve tried to blog about all of the races I’ve entered, and have split them below into the END_OF_DOCUMENT_TOKEN_TO_BE_REPLACED

So who am I?… I’m a 30 year old high school teacher of ICT living in Northamptonshire with my new husband Dan.  We met at Staffordshire University back in 2007 END_OF_DOCUMENT_TOKEN_TO_BE_REPLACED