I had a brainwave whilst driving to work this morning.  (It’s not often this happens.)
A while back I stumbled over when walking into school.  My foot was overhanging the paving slab and fell down into the gravel below.  I was brave, didn’t cry, although cut my knee and photographed the evidence to show and prove to everyone on the internet just how brave I was, despite wanting to cry my eyes out!

This morning as I put my foot on the accelerator of my car and my right foot ached all along the outside I remembered my fall and desperately tried to think back to when it had been.

With the wonder of the internet, I found out that I had fallen on 9th October…is this too far back to be causing me issues now?  When it didn’t affect me throughout the whole of the Dusk ’til Dawn ultra?  I don’t know…I think I’m just grasping for reasons now as to why my foot is no longer letting me run!

Last night was spent at the pool getting 50 lengths in before dinner.  I used my FUEL bag that I got from Maria’s site to pack my kit in.  Very fitting I thought as I had actually won the bag for saying the following…

I almost turned around and came home when I discovered there were no car parking spaces by the time I arrived.  Almost, but not quite!  Reluctantly I let myself in, paid, got changed and headed through to find that actually most of the cars must belong to the parents of the kids at swimming training in the kiddy pool.  It wasn’t overly busy in the main pool, although my lengths kind of looked like this… 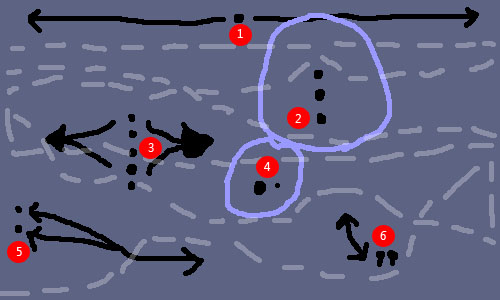 The dashed lines is how my journey went across the pool.

#1. – An old lady that was swimming too slow for me to follow behind as I kept lapping her (is it lengthing her if it’s in a pool?!)
#2. – Three teenagers that every so often would ‘race’ me with no warning until they ran out of energy.  General bobbing in the circled area.  They never really left this spot.
#3. – A group of five men that insisted on swimming abreast and stopping every few strokes to have a chat.
#4. – A very large girl and a really petite girl.  They literally stayed within the circle the whole time.  Didn’t see either of them swimming once.
#5. – A man teaching his daughter to swim.
#6. – A man and his grandchild – I think he was teaching her to dive and go underwater?  They barely left the side of the pool.

I think the fact that I had to think on my spot about what direction I was going in really made the time pass so much quicker.  Before I knew it I’d already done 50 lengths, without a stop and felt rather energised but ready for home and tea!

When I had first walked into the pool from the shallow end I was a little worried.  I could really feel pain in my foot as the pressure of the water pushed alongside it as I was walking.  Whilst I was swimming though I didn’t really notice any soreness.  Even though I have managed to improve the form of my arms (before my left one was really weak and would barely come out of the water) my legs still don’t really seem to be sure what they’re doing, and I can only assume I look a little like a chubby and floundering mermaid with my legs flopping up and down together in the water!

Dan and I got together back at the start of 2007 whilst we were both at Staffordshire University and our groups of friends got talking on a night out. After END_OF_DOCUMENT_TOKEN_TO_BE_REPLACED

I have run a number of races since I first started blogging.  I’ve tried to blog about all of the races I’ve entered, and have split them below into the END_OF_DOCUMENT_TOKEN_TO_BE_REPLACED

So who am I?… I’m a 30 year old high school teacher of ICT living in Northamptonshire with my new husband Dan.  We met at Staffordshire University back in 2007 END_OF_DOCUMENT_TOKEN_TO_BE_REPLACED