I began running as part of a Beginner’s group at my (now) running club after Easter in 2011.  I hadn’t long moved to Northamptonshire on my own and was looking for something to do in the evenings as I didn’t even have a TV license for my house yet.  In fact, I still don’t!…I realised I never actually missed watching TV, and was barely able to make time for shows I watched so didn’t want to rely on someone else’s schedule.  If there’s something in particular I want to watch I can always catch up on iPlayer later on.

Anyway, back to the running…  When I began, two coaches at the club Alan and Howard had set up a beginner’s running group which I saw advertised whilst out shopping one week.  I decided to give it a go.  (Scary prospect heading there on my own.)  £30 for ten weeks – twice a week.  I paid upfront.  This way I couldn’t back out! 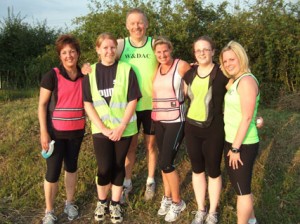 ^  Five of us beginners with Howard the coach.

Howard had only recently been introduced to the sport, but at 72 years of age, Alan had been running for fifty years and had been one of the original founders of the club. 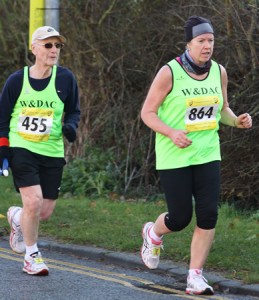 Here he is running Bedford half marathon at the weekend which I went along to support.

Earlier this year his wife died of cancer and One hundred and five club members raced wearing little tartan ribbons made in memory of Alan’s wife Helen.  Raising £450.11 by doing so.

He means a lot to our club and has introduced so many people to running over the years.

Until this week I have never stopped to think “Will I still be running in 50 years time?”  “Will I still be as much a part of my running club as I have been this year?”  Have you even thought about where running will take you in the next 50 years?

All I can really hope for is that I am fit and strong enough to still be able to run as much at Alan’s age as he has done.  In fifty years I will have just turned 79 years old!

Dan and I got together back at the start of 2007 whilst we were both at Staffordshire University and our groups of friends got talking on a night out. After END_OF_DOCUMENT_TOKEN_TO_BE_REPLACED

I have run a number of races since I first started blogging.  I’ve tried to blog about all of the races I’ve entered, and have split them below into the END_OF_DOCUMENT_TOKEN_TO_BE_REPLACED

So who am I?… I’m a 30 year old high school teacher of ICT living in Northamptonshire with my new husband Dan.  We met at Staffordshire University back in 2007 END_OF_DOCUMENT_TOKEN_TO_BE_REPLACED