I am a hoarder.

I have kept every email from someone I know that I have ever been sent.
I keep all of the plastic carrier bags we get from the supermarket in the cupboard under the stairs.
I keep all old cards and letters in boxes.
I never delete or throw away a photo.

I get it from my Dad. He will never be featured on ‘Britain’s Biggest Hoarders’ or anything like that but thanks to his hoarding my Mum’s garden gained a shed. Then a large shed. Then she lost the use of her garage.
When I was younger I can always remember his office at home being filled with all sorts of cups. Cups which contained odd change, cups which held paperclips, elastic bands, drawing pins, buttons, nails… they were everywhere. He never threw anything away… Just in case he needs it later on, even if that was five years down the line!
We were never allowed to screw up and throw away paper as children. If the sheet had only been used on one side we put it in a hole under his desk and it was used again. If it had been used on both sides it went in a box in the utility room and was sent for recycling every fortnight, or when they purchased a wood burner when we were older the used paper was used to start the fire off each night.
I picked up on many of his habits, including the paper reuse but in actual fact it’s one from my Nan, my Dad’s Mum that caused me grief this afternoon.
Apparently she used to fold and keep all her wrapping paper every Christmas and birthday and store it neatly away. I don’t remember this at all and she has been dead for the last ten years now. But apparently some part of me remembered it as for the last five or six years I’ve been doing the same, although barely reusing any of the paper as I always forget it’s there. 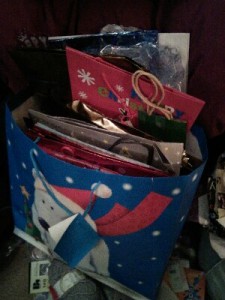 This has resulted in me storing more than 100 gift bags I realised after spending two hours sorting out my craft cupboard and floor in the spare room.

I did manage to throw lots of wrapping paper away that even I determined could no longer be used for whatever reason, (see the picture below!) but there is much more that was neatly folded and placed back up in the top cupboard.  I’ve enlisted Dan to help me remember this year.  And with a cupboard which now contains 100+ gift bags, 15 rolls of wrapping paper for various events, a bag of different coloured tissue paper, a shoebox of ribbons and bows and two bags of already used wrapping paper he is under strict orders to raid the cupboard before all birthdays/other events and elaborately decorate all gifts we give in 2014. 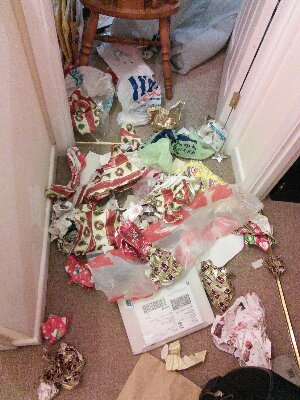 The problem with hoarding is that you know it’s not logical to hold onto so much stuff, but nobody can just tell you to stop or throw things away, you need to make the decision on your own.

I think as a teacher my hoarding obsession has gotten worse.  All plastic wallets and folders are boxed and reused repeatedly, and anything I could possibly use in a lesson ever is kept hold of.

When I went with my Mum to watch the Dressage at the Paralympics, my bag set off the alarms as I handed over my ticket.  Three times.  Each of the three times my bag was searched they found a pair of scissors which was then disposed of before they tried me in the metal detector, only to be stopped again!  Teachers are always prepared…like boy scouts!

With the possibility of moving house in the next few months very high I need to start picking away at my hoardings now to make sure they are minimal by the time we are packing our life up in boxes!

Janathon Day 4: I had aimed to head to Parkrun this morning, but when Dan and I couldn’t stop watching Breaking Bad last night and it ended up past 1am (we NEVER stay up this late normally!) I knew it would be more sensible NOT to set my alarm for this morning and instead had a bit of a lay in before storming through the house on a dejunking session.  I fitted in one of my No-feet workouts after lunch which was nice for a change as since I have been allowed to run again I’ve neglected my arms and core a little.  I need to get into some sort of routine of continuing with my overall body strength and conditioning alongside my running otherwise I’ll soon end up getting injured again I’m sure!

Dan and I got together back at the start of 2007 whilst we were both at Staffordshire University and our groups of friends got talking on a night out. After END_OF_DOCUMENT_TOKEN_TO_BE_REPLACED

I have run a number of races since I first started blogging.  I’ve tried to blog about all of the races I’ve entered, and have split them below into the END_OF_DOCUMENT_TOKEN_TO_BE_REPLACED

So who am I?… I’m a 30 year old high school teacher of ICT living in Northamptonshire with my new husband Dan.  We met at Staffordshire University back in 2007 END_OF_DOCUMENT_TOKEN_TO_BE_REPLACED