I did have another post lined up for tonight but something happened at school today (not for the first time) that made me angry and extremely frustrated and I had to vent about it online.
Our school was having a bake sale today and the kids in Year seven (all eight of them!) had put on a magnificent spread in the cookery room. When the bell rang for break possibly every kid in the school was queuing down the corridor to get at the cakes! 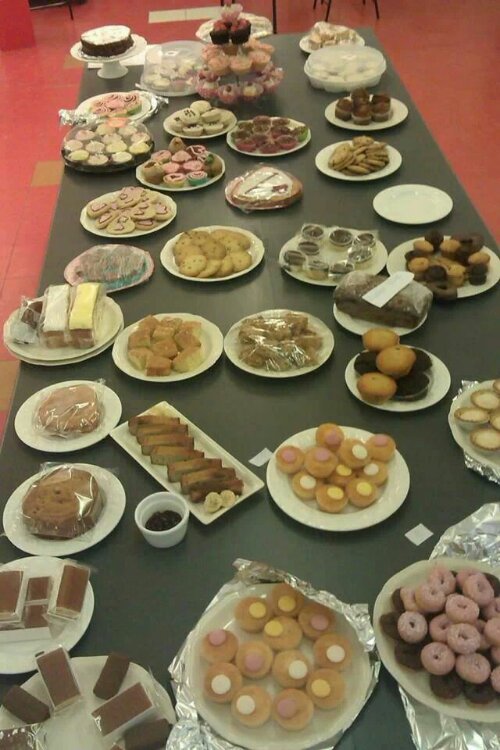 I usually bake something to take along to the sale but didn’t have a chance after running club last night so toddled along with my purse instead. As I arrived and grabbed a teacher I needed to see, the head loudly said “Miss Moore can’t have any cakes, she’ll mess up her training!” I rather curtly told him I didn’t want any anyway and headed off upstairs to sit in my classroom until the end of break.
I had clearly wanted to buy one as I arrived with purse in hand, but the way in which he had said it to me indicated that I shouldn’t be buying any and resulted in me going back up to sit in my classroom. Yesterday he had jokingly stopped me from going to the staff room when he had brought in chips for all the staff, saying it ‘wasn’t part of my training regime’. I therefore told him I didn’t like chips.
This isn’t isolated to recent events either. Back on the last working day before Christmas when the trustees and governors had come in to school to wish us a Merry Christmas, all staff members sat around the large table in the cookery room which had been filled with Christmas goodies. He purposefully moved all trays away from where I sat commenting that if I ate anything I would become too large to fit into my wedding dress in the Summer. No effort was made to put back the trays of food and I felt like I couldn’t then eat any of the food on the table as I would have to get up and walk around the table in order to reach the trays.
I haven’t always had the best relationship with food in the past but I’ve never had an eating disorder. His comments over the past few months have made me feel as though I must eat away from others when at work. If he had spoken in this way to somebody recovering from an eating disorder, he would have destroyed them.
I don’t think he makes the comments with the intention of doing damage and he’s lucky I have a pretty tough skin.
At my last school a girl in my form was hospitalised twice with anorexia. As her form tutor I met with staff from the hospital several times to help plan her reintegration to school again. At one session I was given a list of words and phrases to avoid which I shared with teaching staff as words which might trigger her anorexic behaviour again. Such phases as “You’re looking well” and “That’s normal”. It was awful seeing her starve herself and lose several stone from what was a tiny frame in the first place. One of the sixth form teachers told her how well she was looking as a passing comment and she didn’t eat for four days. My brother also had what I would class as anorexic tendencies when he was at college going from an overweight teenager to a bobble head within months, skipping meals and obsessively counting calories on the back of comments made to him by others.
What you say to someone can often affect them more than you know, so please think twice before coming out with words that could potentially hurt somebody else and think hard about how that person would feel. My headteacher has only known me a matter of months and has no idea if I have had food disorders in my past, had this been the case his comments could have ended up much more damaging than a blog rant on Valentine’s Day!

18 thoughts on “Think before you speak”

Dan and I got together back at the start of 2007 whilst we were both at Staffordshire University and our groups of friends got talking on a night out. After END_OF_DOCUMENT_TOKEN_TO_BE_REPLACED

I have run a number of races since I first started blogging.  I’ve tried to blog about all of the races I’ve entered, and have split them below into the END_OF_DOCUMENT_TOKEN_TO_BE_REPLACED

So who am I?… I’m a 30 year old high school teacher of ICT living in Northamptonshire with my new husband Dan.  We met at Staffordshire University back in 2007 END_OF_DOCUMENT_TOKEN_TO_BE_REPLACED