Yesterday we had no internet at school. Every Friday for the past month the internet has gone down at some point in the day, which has been frustrating as I teach web design to three classes on a Friday afternoon and it’s a subject that’s quite hard to teach without access to the internet!
After hours and hours on the phone to BT over the past few weeks with them telling me I had software issues at the school they finally agreed to come out and have admitted fault for the issue. Good job too otherwise I’m sure I would have personally been asked to foot the £225 callout charge! Unfortunately it has meant that we are without internet whilst they try and resolve the problem.
With only six teachers working on a Thursday I am sure all but one have rushed to find me to ensure they get the internet working again in time for their lessons. It’s crazy how much teaching has changed.  When I was towards the end of high school the internet had just come around and there were three computers in the school library with internet access that were permanently booked up for use.  When I tell the kids I teach this now they ask me if there were TVs around when I was little.  Erm, thanks…I’m not quite that old!
Breakfast yesterday morning was the same as the day before… Oats and three strawberries.  I’m just loving this combo! 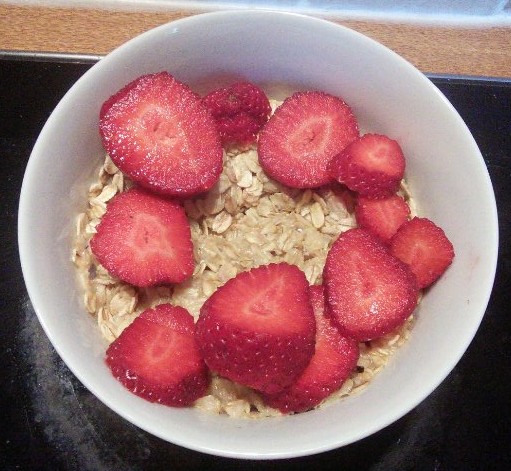 Lunch was a rush job and I threw together a quick salad of leaves, cherry tomatoes and cheese with a few extra strawberries to munch on before they go off. I also added a Danio yogurt for a mid afternoon snack to keep me going through to running club. 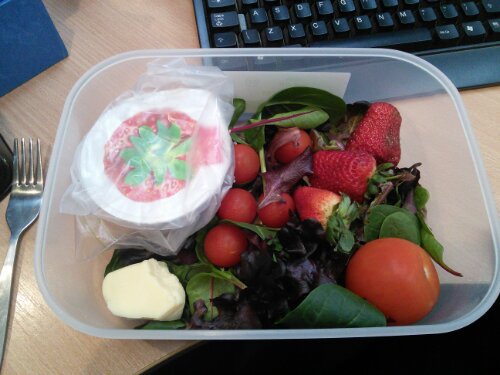 I spent my lunch hour updating the coursework spreadsheet for my year 11s. 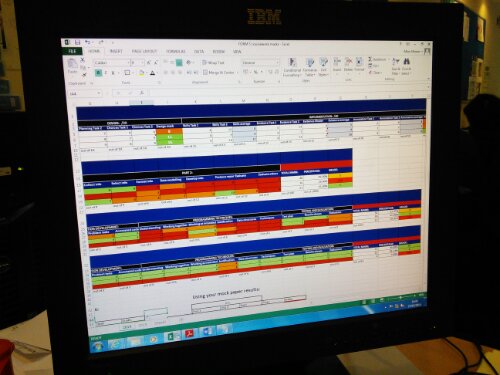 These colours never make me think of traffic lights.  They always remind me of peppers and I regretted not chopping one up as part of my lunch!

Even though in the morning I was super organised and managed to make lunch, put tea in the slow cooker and organise my running stuff ready for club I somehow realised when I arrived in Wellingborough yesterday evening that I’d left my kit bag back at home in the porch.

I’d even been organised enough to put my Garmin on instead of my regular day watch so that I didn’t have the worry of losing my watch when I switched later on. 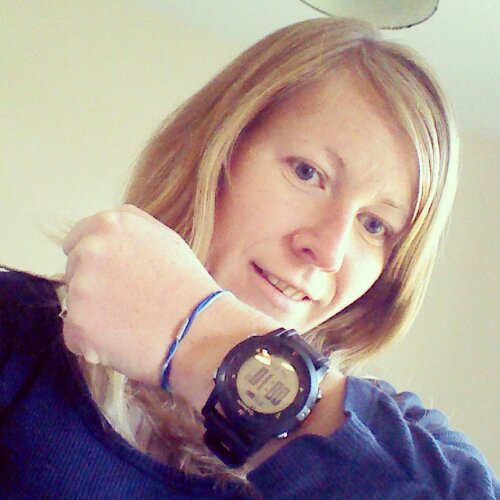 After a long day at work (you can see the bags under my eyes in that photo and that was in the morning!) all I really wanted to do was go for a run and was gutted I forgot my kit, so quickly charged my iPod when I got in and headed out for an unplanned progression run over a hilly route.  I really enjoyed it and my legs remembered they can pick up the pace when they’re asked to! 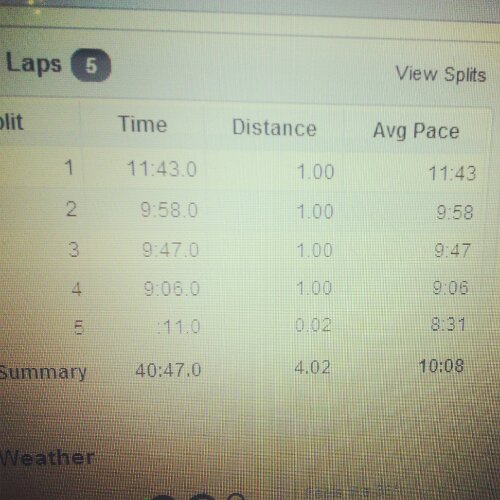 At the moment my favourite shorts of all time (Ronhill) are on sale at SportPursuit.  I lived in these all Summer long so felt I could justify picking up another pair and one in purple at just £12.90 a pair.  Hopefully they’ll arrive before the heat hits again and I won’t have to rush through my washing pile quite so quickly each week.

In love with the slow cooker lately and I’d quickly thrown together a bacon casserole in the morning for our dinner which didn’t take long to pull out and serve up when I returned from my run. 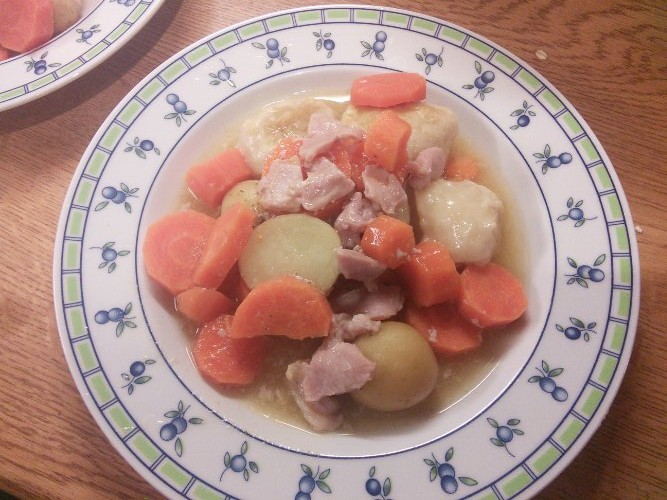 Because our school is hosting a craft fair tomorrow morning I had been asked to do some savoury baking for the school’s own stall so ended up staying up until 11pm baking sausage rolls.  They turned out quite well though so I’m happy.  Just got to remember to take them with me now! 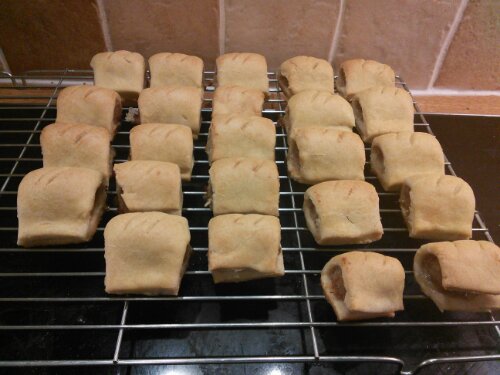 Today is Dan and my seven year dating anniversary so we shall be heading out for dinner tonight after work.  It’ll be nice to see some of each other.  It seems like we’re both always busy just lately.

This is us seven years ago today when we first met… 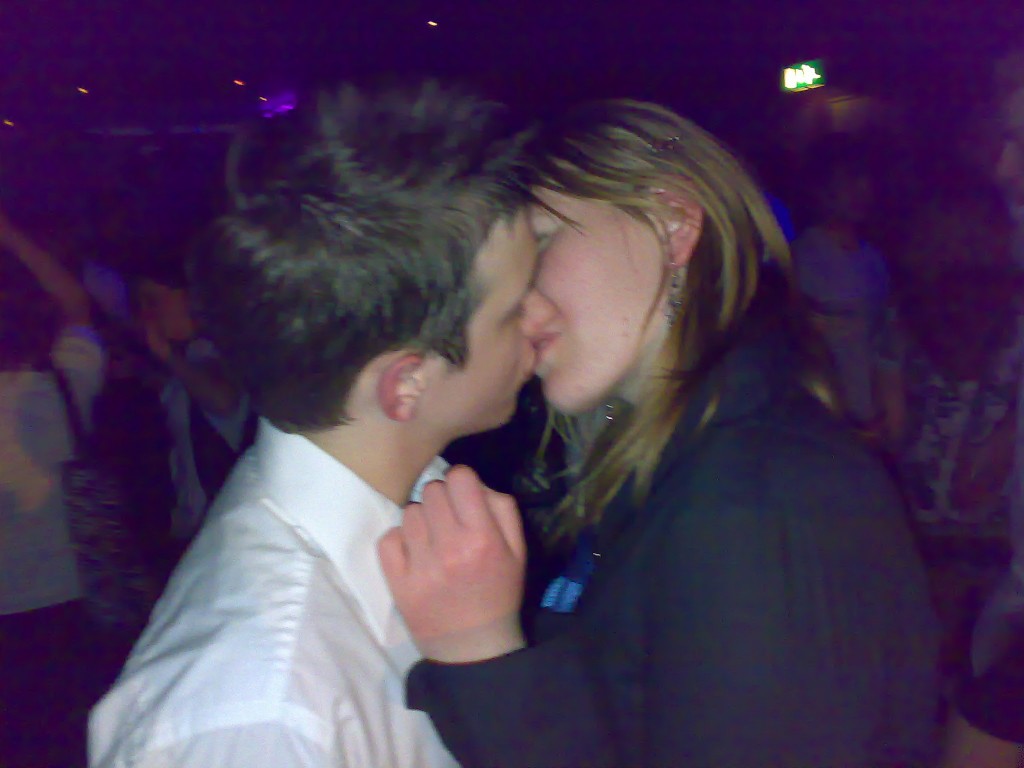 …and so that you can see our faces, this is what they looked like seven years ago! 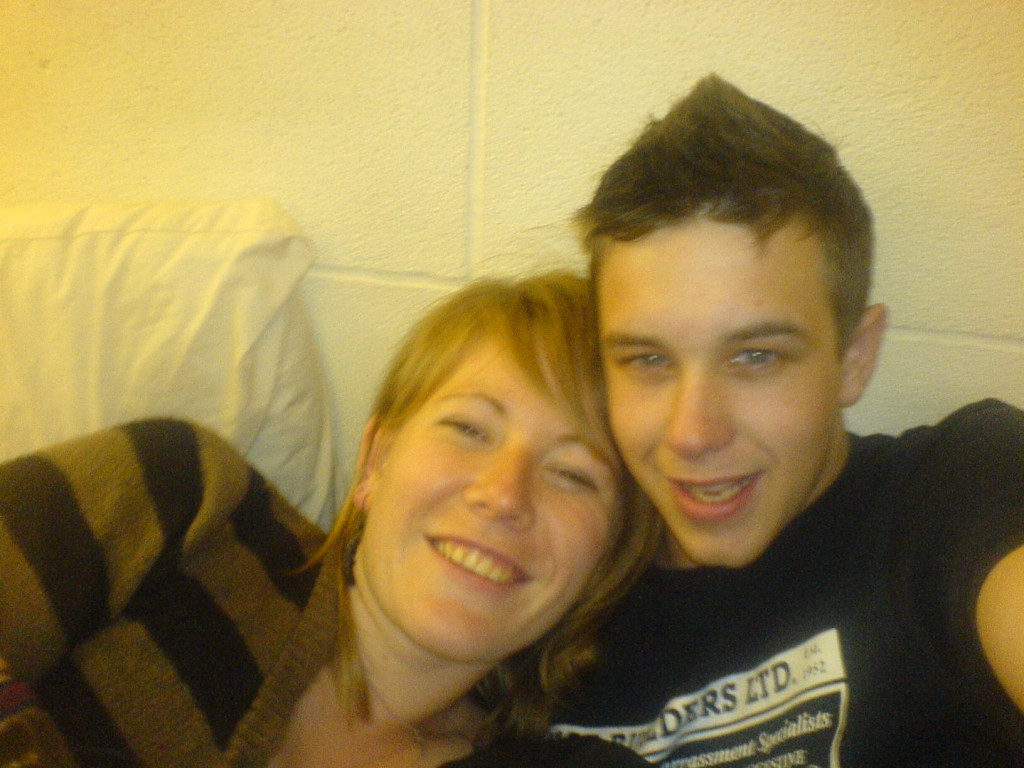 Do you have pictures of the first day you met your other half?  Or was it back when taking photos wasn’t such a big thing?!
When you’re married, do you still celebrate your dating anniversary?

Firstly, last night I slobbed out in my pyjamas from the minute I arrived home from work at 6pm. 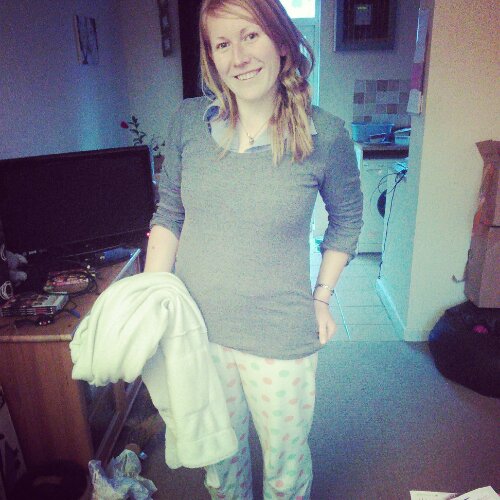 Sometimes, after a day of teaching year 10, you just want to feel cozy and slob out on the sofa.  Good job I got a cheeky three mile run in before work this morning.  My watch was all over the place again though.  At one point it told me I was running 4minute miles.  Um-OK.  NOT very likely!  I took the run pretty easy and just picked it up for 3/4 mile in the middle and added a tough hill at the end before my cool down.  Working on feel I would say I was probably running at 8:30mm pace for the quicker section of the run.  When I returned I was debating whether or not I was too hot for porridge, but I’d left it out on the worktop from the night before and I couldn’t resist making another batch for breakfast.  This time topped with strawberries.

It’s pretty filling actually and has actually stopped me from picking at my lunch early the past couple of days.  The joys of eating lunch whilst working… 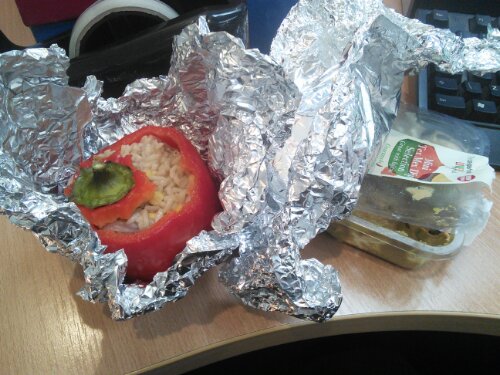 …lots of tin foil!  Coursework deadlines for my year 11s are next Friday, before we break up for Easter, so at the moment all my breaks are spent remarking their work trying to help them achieve the best marks possible.  It will be a relief once their coursework is out of the way.

For lunch I had a red pepper version of my meal from yesterday.  Because the mixture had been in the pepper since yesterday afternoon and then left in the fridge it was a little soggy on the bottom – probably best just to make one pepper up at a time in future.  Anna hit the nail on the head yesterday when she spotted that my peppers didn’t contain any protein.  I must admit I did feel a little hungry yesterday afternoon and could have done with some cheese added to the mixture.

Dinner was another slow cooker meal waiting for me when I arrived home.  I’m really getting the hang of this slow cooker malarkey now!  Similar to the other night – half a jar of tomato pasta sauce, half a pack of Philadelphia and four rashers of bacon (serving both Dan and I) and then I added a few spoonfuls of sweetcorn to the mix along with half a flatbread. 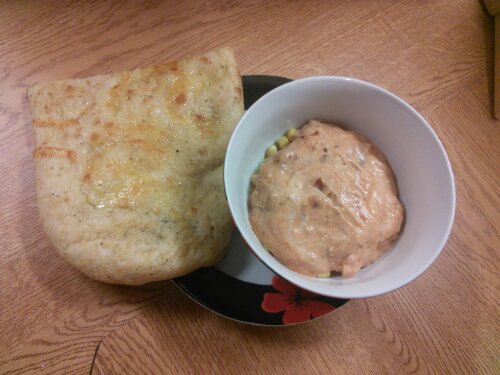 I am aware that this picture makes my dinner look rather like cat vomit but you have to trust me when I say it was tasty!

When I headed back to Norfolk last weekend I met up with my friend Zoe, who is also getting married this year, in October.  She was showing me some of the decorations she had made ready for the day and brought out this pot of what I thought were real flowers to begin with… 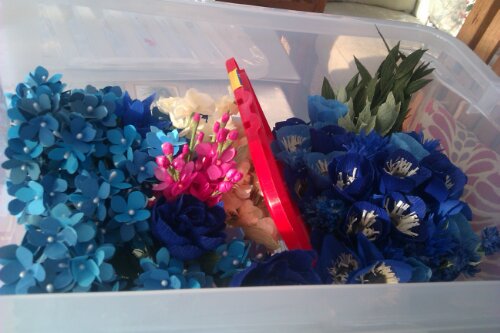 They are actually flowers that she has made herself out of card.  They are really, really good! 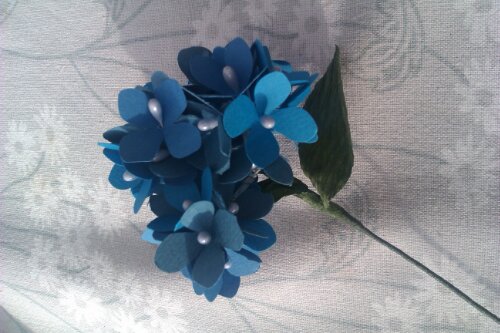 I’m trying to persuade her to go to a few craft fairs and sell her work but she’s been having none of it!  She’s also been working on some flower style pompom balls to hang in her reception.  They are now slowly taking over her living room…! 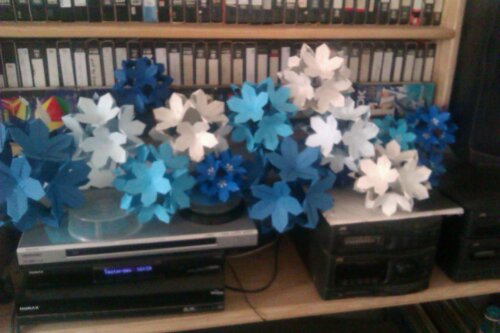 To be honest, I’ve not really thought much about decorations for our wedding yet.  My school breaks up five weeks before my wedding so I plan on honing in on my creative skills once the stress of work is out of the way for the Summer.  Zoe has got me thinking what sort of things I could come up with though.  Any suggestions?

I have finally gotten round to finishing addressing invitations for our wedding this week.  It seemed to go on forever!  A couple of people have asked me what the invitations look like inside so I’ve taken a few pictures… 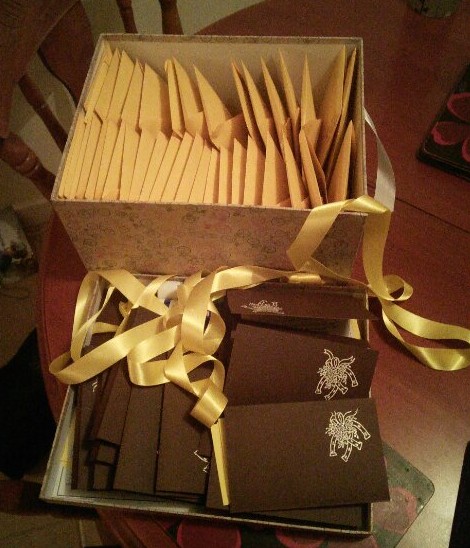 (Our colours are obviously yellow and brown!) 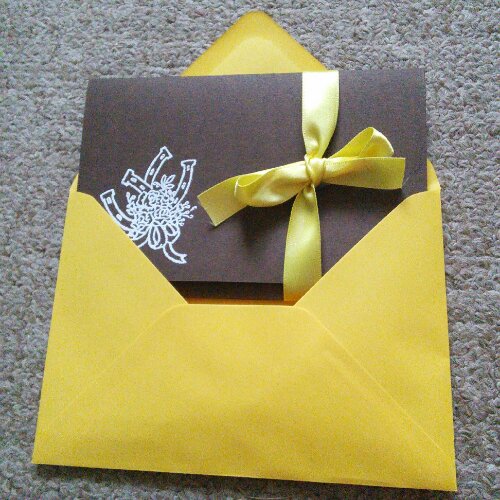 The front of the invitation has an embossed white emblem of horseshoes on the left hand side.  I used to work as a riding instructor for several years, and we are leaving in a horse and carriage so this is something we thought fitted for the day.  (Of course, horseshoes are also supposed to be a symbol of luck.)  I only discovered embossing about a year ago but have become addicted ever since (although not as addicted as Lily, whose wedding is tomorrow!) 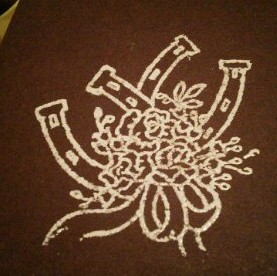 Once the ribbon has been untied, you can lift the top flap of the invitation up to reveal four separate cards underneath. 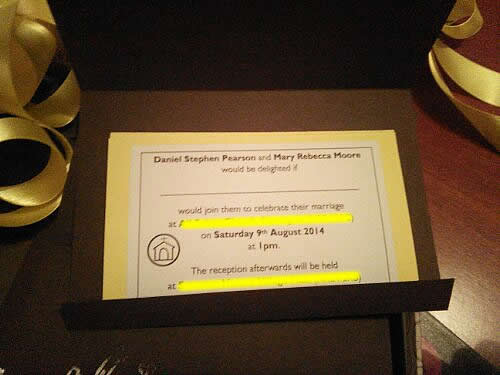 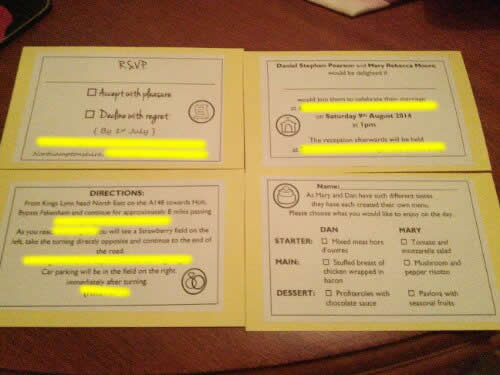 The four cards are:
* The official invitation (details of wedding website on the back)
* The RSVP
* The directions (hand-drawn (on the computer) map on the back)
* Menu choices (If partners are invited, another copy on the back)

Despite the invitations taking much longer than I initially thought they would (probably 20 hours in total at a rough guess!) I’m happy with how they turned out.  I would much rather have a personal touch (and obviously we saved a lot of money on making them ourselves as well.  We paid £24 for 500 sheets of card and this will last us for all the Thank-you cards, Favour cards, Seating plan, Name places and Order of Service sheets as well.  The ribbon came to £11 and I paid £5.90 for 100 yellow envelopes.  Job done!  (Finally!)

I’ve always been one to work through my lunchbreaks.  Does anyone else do the same?
Any suggestions for wedding decorations?  Ever tried embossing?

Dan and I got together back at the start of 2007 whilst we were both at Staffordshire University and our groups of friends got talking on a night out. After END_OF_DOCUMENT_TOKEN_TO_BE_REPLACED

I have run a number of races since I first started blogging.  I’ve tried to blog about all of the races I’ve entered, and have split them below into the END_OF_DOCUMENT_TOKEN_TO_BE_REPLACED

So who am I?… I’m a 30 year old high school teacher of ICT living in Northamptonshire with my new husband Dan.  We met at Staffordshire University back in 2007 END_OF_DOCUMENT_TOKEN_TO_BE_REPLACED