So after my long run on Sunday morning I headed back to my parents where I had promised to clear out my old room. It’s in a bit of a state… 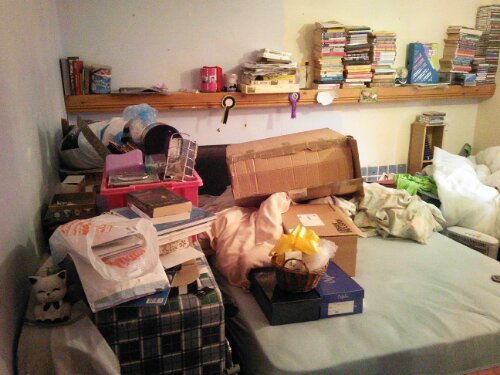 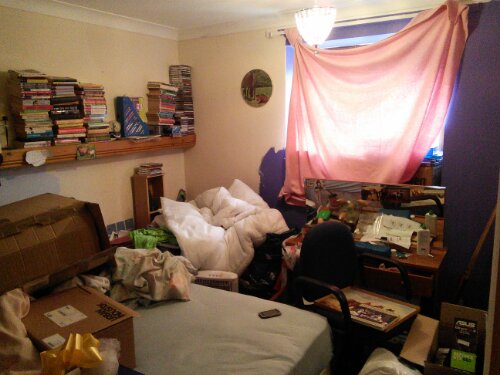 I first moved out from my parents (where I’d lived my whole life) in October 2004 when I went off to study at Staffordshire Uni. Nearly ten years ago now! I’d always been a bit of a hoarder anyway, but after I moved out my Dad took out the desk in my room and used the bedroom as storage for his Dog’s Doorbells. (More on that in a minute!)
My brother also used the room as extra storage when he moved back home. My Dad replaced the single bed in there with a double but left the single lying up against the wall.  So it got filled up with junk pretty quickly!
My Dad is going in to hospital on 22nd April to have the tendons in his arms fixed as they are badly damaged. Apparently it will take him six months to recover so he’s decided that now is the time to paint the house through and sort out the garden while he still has some use left in his arms.
Basically I had a lot of work to do before letting him come in to paint the room! 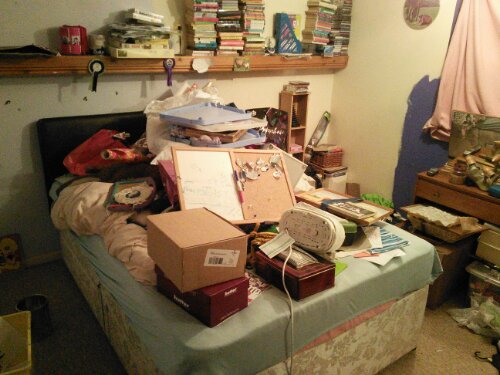 The plan was to pile everything onto the bed so that I would HAVE to finish before bedtime. It didn’t happen though and I ended up sleeping on the lounge floor on Sunday night! I’m happy to say I did get it done by teatime on the Monday though.
Whilst hunting through my room I found lots of old memorabilia I’d hung on to, such as these old cinema tickets for The Lion King, which my Mum took my friends and I to see for my tenth birthday. If only the cinema was still just £2.50 a ticket! 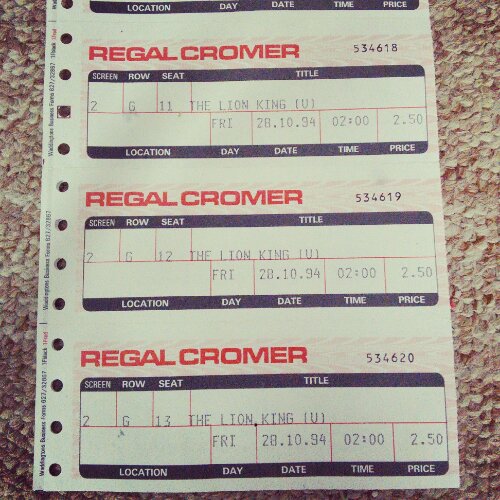 I took a couple of breaks throughout the day and headed out to the garden for a little while. Mum has so many pretty flowers out at the moment. 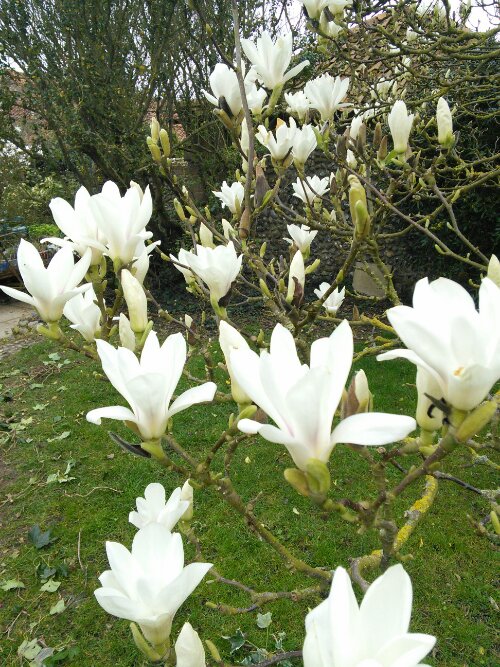 We also spent some time going through ideas for the wedding flowers in the morning. Mum picked up all of these books at an auction house for £3 along with a couple of other boxes of books. Good find! 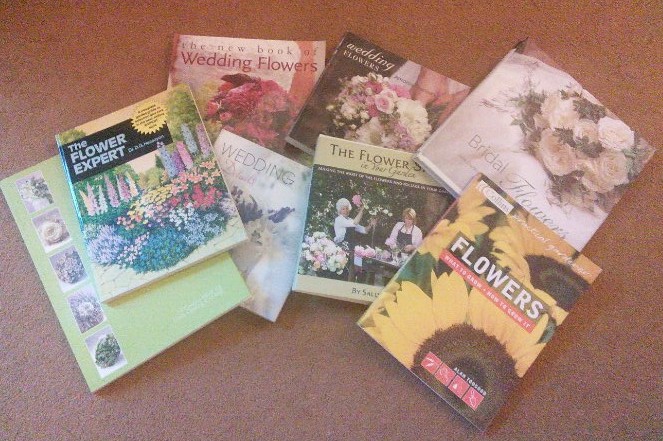 I can’t remember if I’ve already mentioned but my Mum is growing all the flowers for our wedding day.  We’re going with a white/yellow theme for flowers and plan on putting together the displays the evening before the wedding and the bouquets the morning of wedding.
Whilst I was back I also took some time out to help train my parent’s dog Blue to use the Dog’s Doorbell. 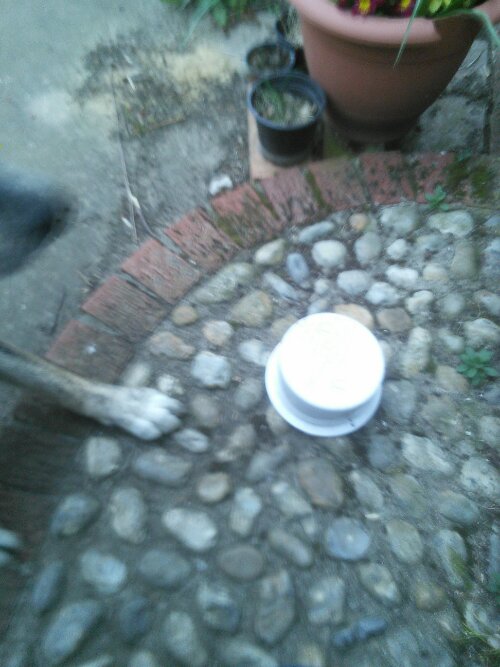 He was too quick for my tablet camera though and I kept missing his foot on the bell!
When I was about nine years old my Dad invented The Dog’s Doorbell. Basically it’s a platform outside which the dog puts his foot on which then rings a bell inside to let you know he wants to come in. When Dad first created it I trained our border collie, Patch to use it, with help from my friend Sarah over a weekend. At the time Dad had several articles in various papers and even ended up on a Tomorrow’s World – Best Inventions show. One of my claim to fame moments was having lunch with Katy Hill inbetween takes!  Dad also got picked up by taxi early one morning and escorted down for an episode of Big Breakfast.  Does anyone remember that show?!  Here’s a link to a radio show interview he did as well.  I was shocked when I first went to uni and started seeing a guy from Northern Ireland who turned out had used The Dog’s Doorbell as one of his research projects on small inventions!

Quick run-down on the food from my parents.  Very bread heavy I’m afraid.  I just love their bread so much!

Breakfast was some bread with butter and peanut butter.  My Dad has started feeding peanut butter to the dog as a treat just lately so I was lucky there was any left in the jar for my breakfast! 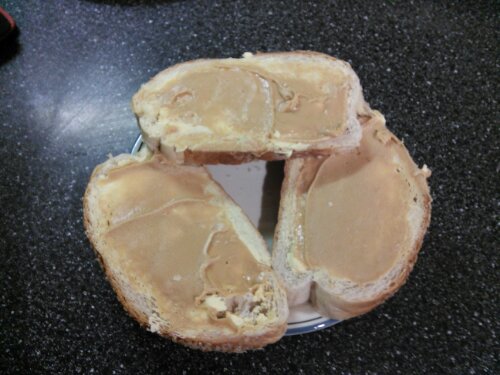 I stopped tidying my room for lunch around midday and really fancied some soup but there wasn’t any to hand so settled with half a tin of baked beans and some more bread and butter. 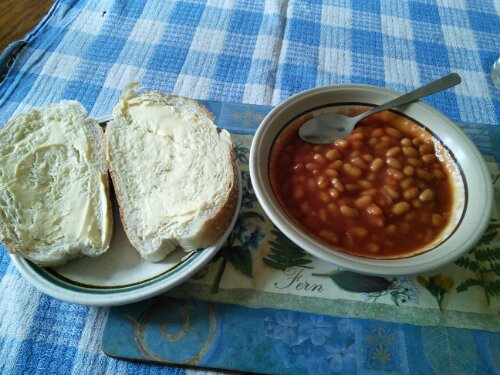 Dinner was my Mum’s standard ‘We’re all going to be sat together at the table meal’ of chicken with veg.  We used to have chicken most nights of the week when I was growing up as both me and my younger brother Mark were picky eaters.  I added some sweetcorn and onion gravy to this plate before demolishing.  Turns out tidying a bedroom is hungry work! 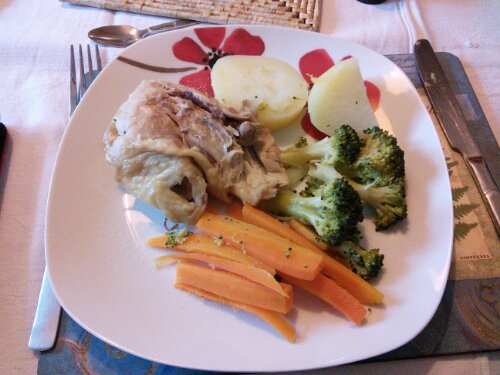 After seeing what stats I could get from my runs on Strava the other day I mentioned to Laura at the weekend about different platforms for logging runs and she told me all about Fetch Everyone.  Fetch has games you can play whilst out on your runs.  The ones I’ve jumped straight on board with are Fetchpoint and Conquercise.  Conquercise is quite simple to follow and colours in 1x1m grids on the map to show where you have run before.  If you have run areas more than other runners you can ‘Conquer them’ (the purple sections). 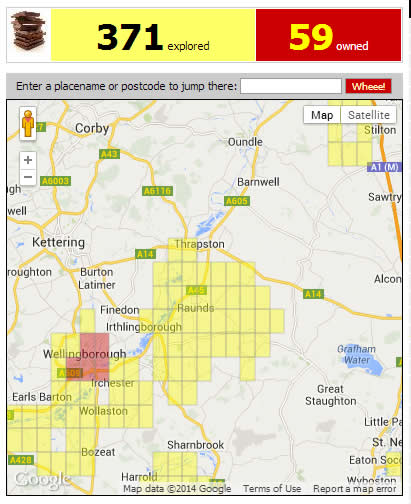 (Not my grid, as I only started playing today.)

Fetchpoint has lots of rules and is a little more complicated but in a way, more fun and did end up dictating where I went for my run this morning! 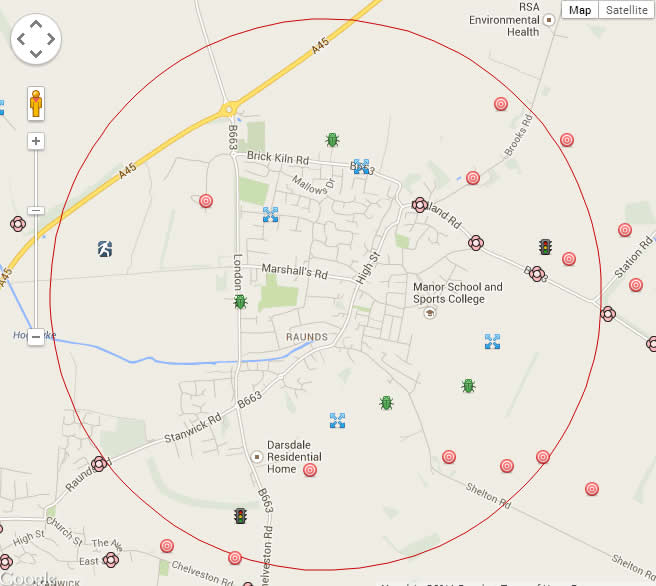 Basically, you are given an ‘area’ surrounding your house and there are several markers inside that area.

You need to transport bugs from outside your area by running through them and continuing outside of the circle to ‘drop them off’.  Flowers are where somebody else has run through your area and you can ‘pick’ these flowers by running over them.  You get points by running between targets the quickest route possible and there are lots of other symbols that mean different things as well.  There are also coins scattered over the entire map each day so that you can increase your score by running in new areas.  Five Gore-illas collected each month puts your name in the hat to win some Gore items as well.  (Might have just ran a little further than initially planned in order to pick up two of the Gore-illas this morning!)

If you have a dog, how do you know when they want to come in from the garden?

Dan and I got together back at the start of 2007 whilst we were both at Staffordshire University and our groups of friends got talking on a night out. After END_OF_DOCUMENT_TOKEN_TO_BE_REPLACED

I have run a number of races since I first started blogging.  I’ve tried to blog about all of the races I’ve entered, and have split them below into the END_OF_DOCUMENT_TOKEN_TO_BE_REPLACED

So who am I?… I’m a 30 year old high school teacher of ICT living in Northamptonshire with my new husband Dan.  We met at Staffordshire University back in 2007 END_OF_DOCUMENT_TOKEN_TO_BE_REPLACED