So I have returned from the land of South East Italy where Dan and I had a lovely honeymoon. 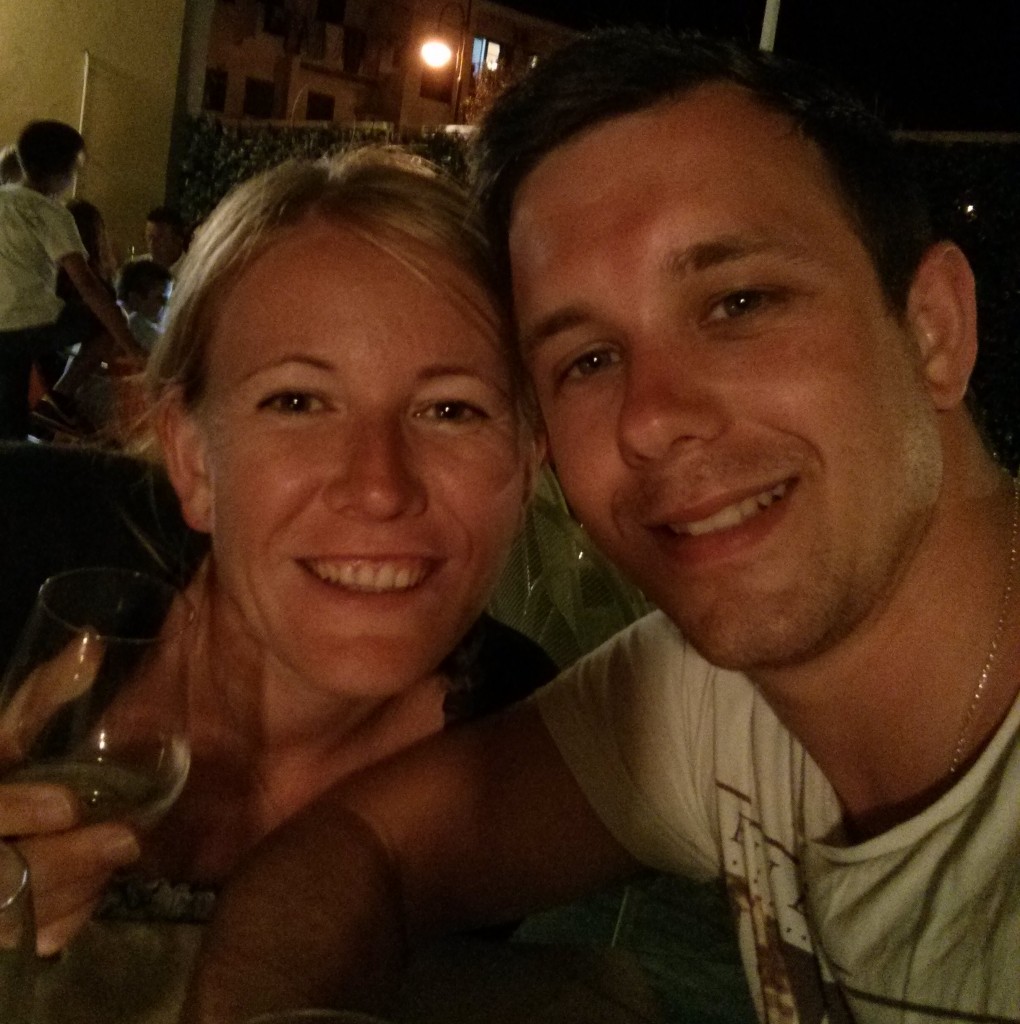 We arrived back in Norfolk at my parents’ house late Thursday evening, ate some tea, picked up Bella from my Aunt’s house and loaded our cars with wedding gifts, suitcases and decorations from the day.  It was probably midnight by the time we had gotten back to our house in Northamptonshire and unloaded our cars.  I was so ready to fall into bed!

I managed to get my first run post-honeymoon in yesterday afternoon.  Just 3 easy miles, but it felt good to be back in trainers again after promising Dan I wouldn’t take the trainers on honeymoon with us!

Most of yesterday was spent unpacking and cleaning the house.  It’s amazing how quick spiders can appear to populate and spin webs in just three weeks!  I’m sure there were none when we left!

In the evening, we headed to Stanwick Lakes a few miles up the road with our friends Vick and Alex to watch Indiana Jones and the Raiders of the Lost Ark as Stanwick Lakes were playing it outdoors on a blow-up screen.

As many others did, we packed up a picnic to enjoy before the film started. 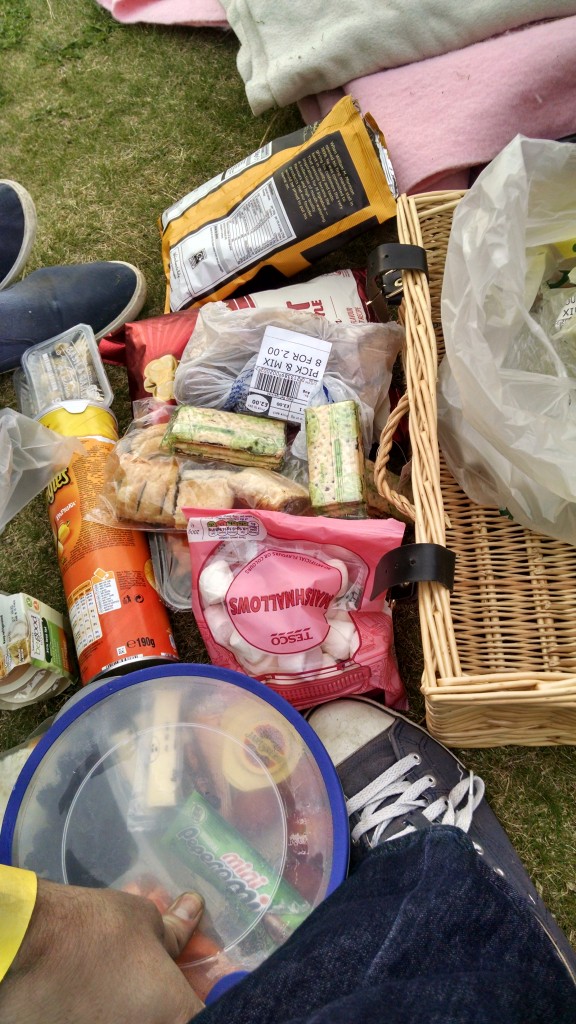 We arrived in plenty of time as we’d not spoken to Vick or Alex since our wedding day and both couples had loads to fill each other in on.  We were actually the first lot of people to arrive for the film, arriving at about 6:30, when the film wasn’t due to start until nearer 9! 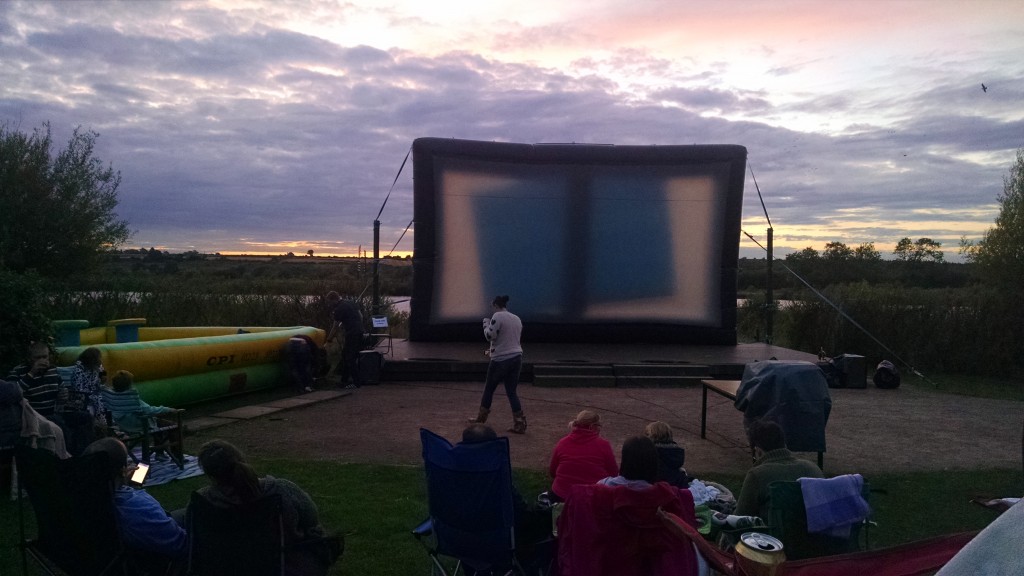 There was a blow up gladiator ring to the left of the screen and the boys enjoyed challenging each other to duals in the enclosed ring, to the delight of all of the other spectators! 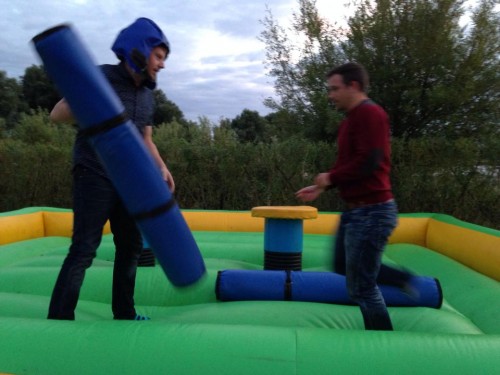 Vick and Alex didn’t have camping chairs to bring and it seemed that everywhere had sold out of them (must be due to festival season in the UK) so in the end managed to get a ‘couples’ camping chair from Argos on their way to the Lakes! 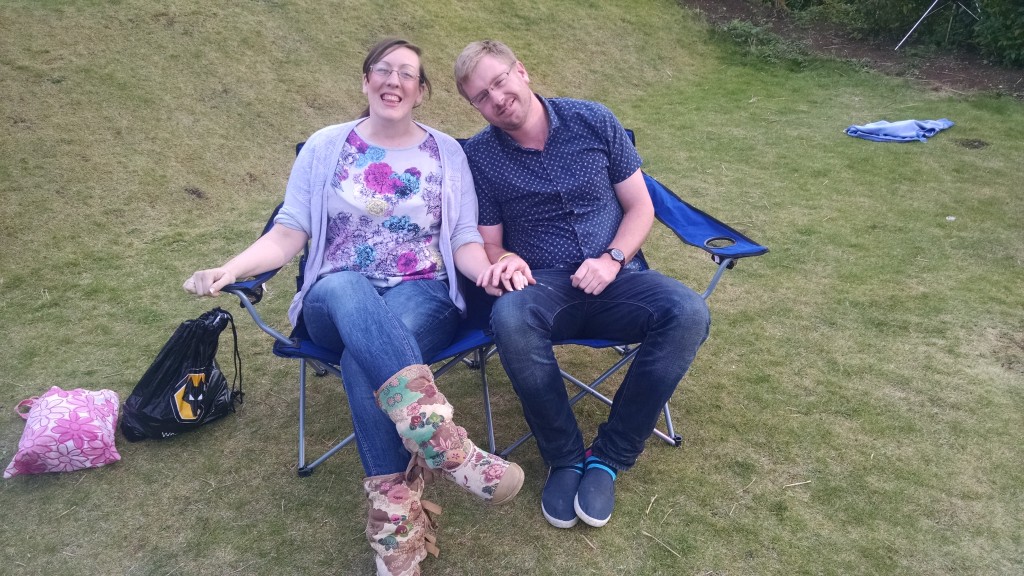 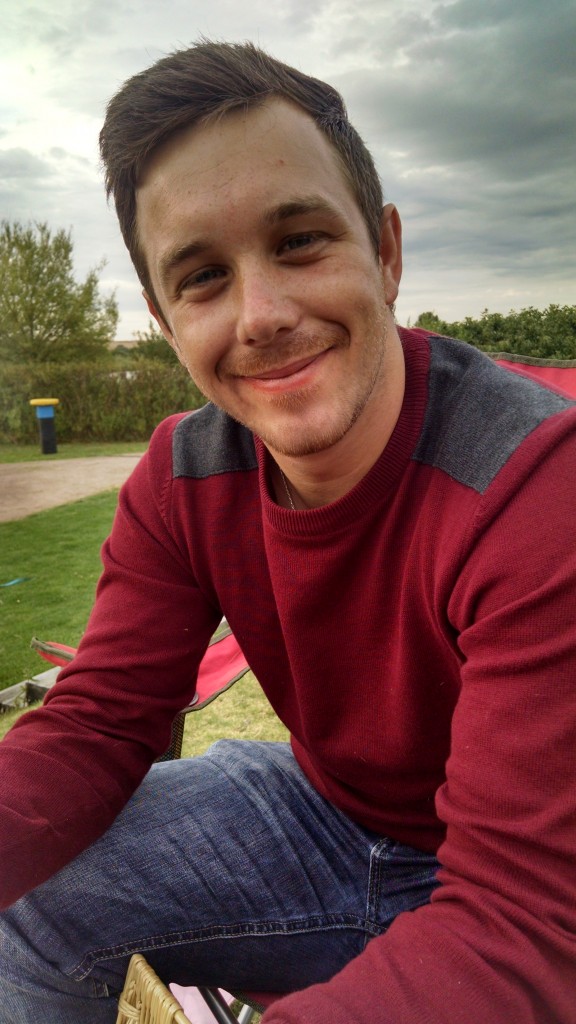 Despite it being so cold I really enjoyed the night and we will be back next year! 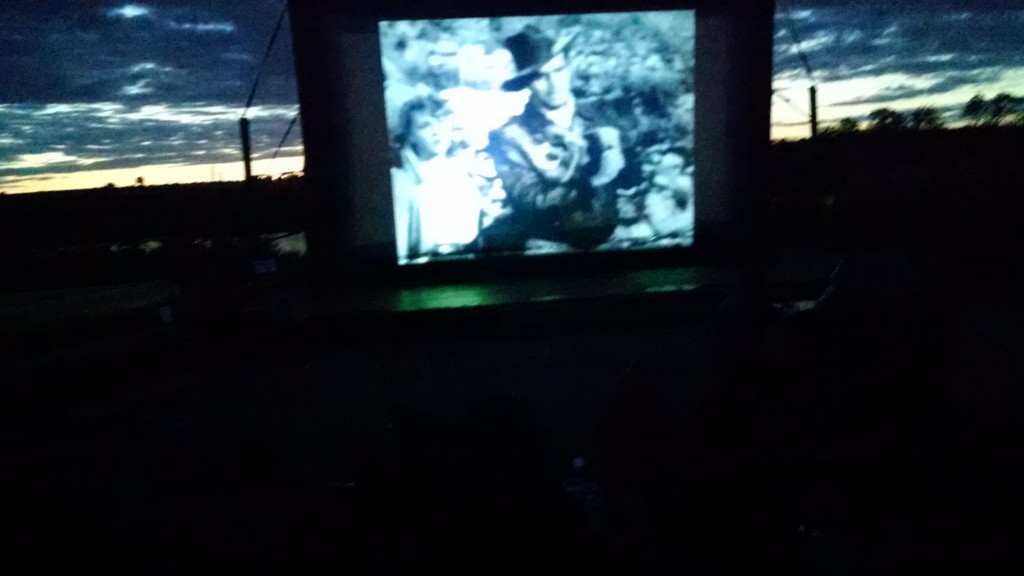 Whilst we’ve been away I’ve been occasionally checking blogs and commenting.  To start with I felt a bit guilty for doing so…I was on honeymoon!  But I’d run out of books early on and whilst Dan can lie by the pool day after day, that is just not for me!  Luckily there was wireless by the pool, so during the second week, on the days that we spent at the pool, blogs became my reading material.  What can I say… they’re just my way of relaxing!  I’m looking forward to catching up a bit more now I’m home again though.

I’ve got so much to write about from the last three weeks…wedding, pre-wedding, more GRIM 70 details, honeymoon…I’m going to start with the food from honeymoon though as most of those pictures were on our phones so easy to upload to the blog (and I can’t find my camera lead right now!)

We stayed in a little area called Cilento in the South of Italy, just round from the Amalfi Coast and it was absolutely beautiful.  this was the view from the balcony of our hotel room.  (Hard to capture in a 500px wide photograph!)

We had opted to stay in a less touristy area of Italy, – I think we only ever saw four English tourists whilst we were there. This did make ordering food a little difficult though, especially as Dan is such a picky eater!

Several times we stuck to the pizza portion of the menu as the choice was quite large, and it easy to memorise pizza toppings in Italian before heading out for a meal!  Everywhere sold pizza and prices would often start at just €3.50. 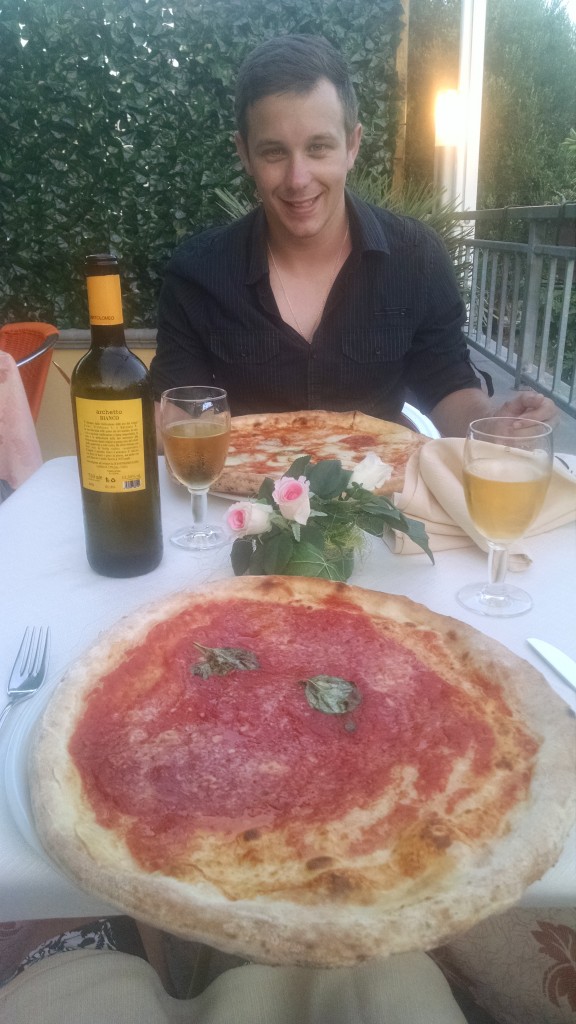 Wine was also incredibly cheap at just a couple of Euros per glass, and as a rare-drinker, I drank much more than I would have done in England. 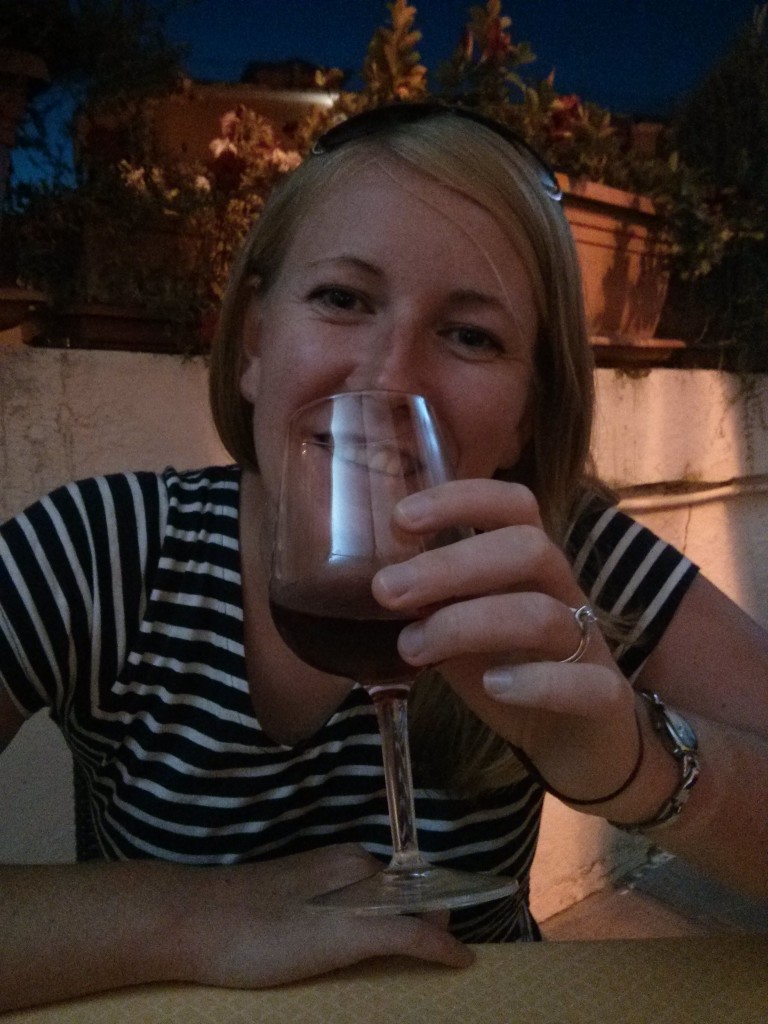 We did get some gorgeous cocktails in on the day that we headed up North to visit Capri.  As the area we were staying in wasn’t very touristy, there didn’t seem to be anywhere that sold cocktails where we were and we had always said that cocktails are a must whilst on honeymoon! 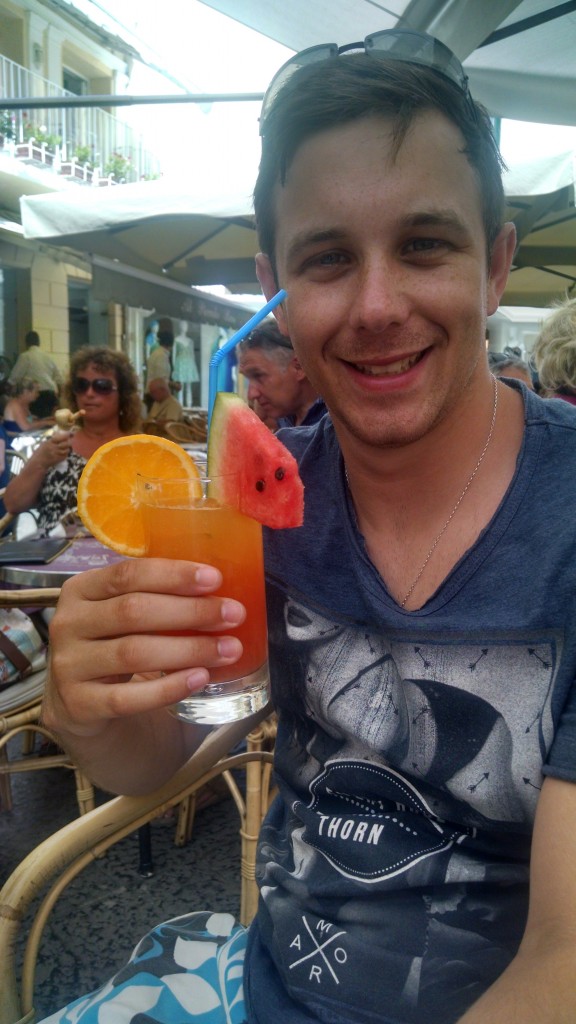 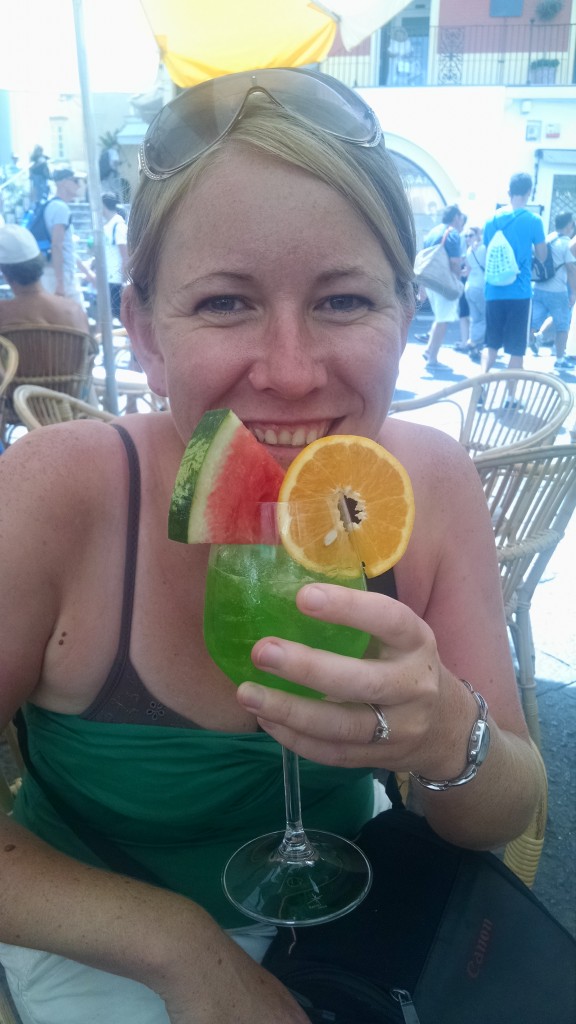 The fruit in the cocktails was amazing – so fresh and large.  Obviously I pinched the fruit from Dan’s as well.  It was like having a whole fruit salad for dessert!

In the supermarkets I couldn’t get over how large the watermelons were!  (Pringles in the crate for comparison!) 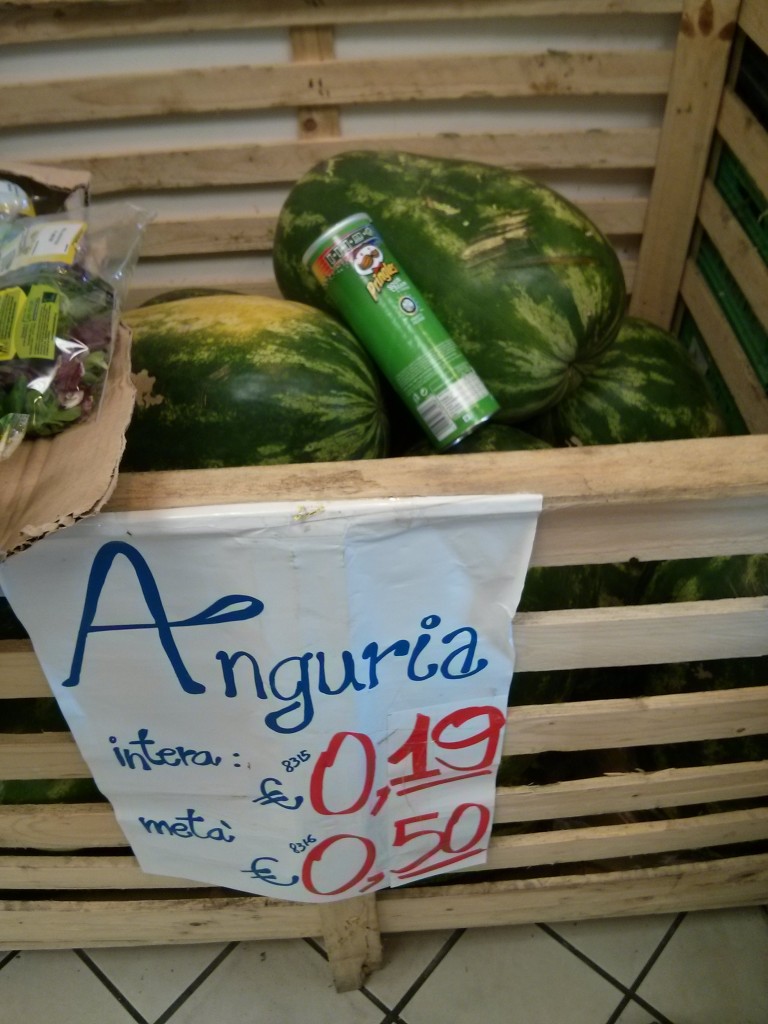 I’m pretty sure that I could have demolished that watermelon in a couple of days had Dan let me buy it!  (On a side note, did anyone else spot that nuun are bringing their watermelon flavour over to the UK?…Yay!) 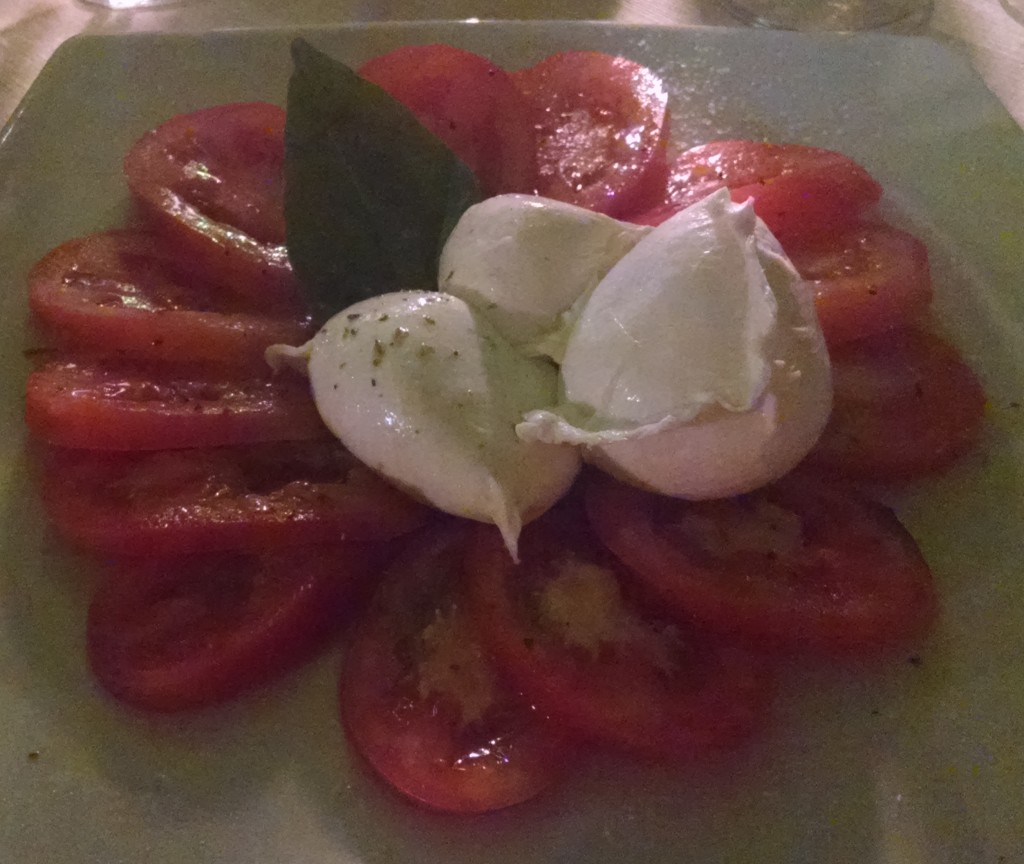 The area was famous for its buffalo mozzarella which was so soft and delicious.  It came with several of the meals.

Another of my favourite salads was this one (poor pic as we sat underneath a group of trees and the light was very bright in some spots, and dark in others).  Slices of melon with slices of prosciutto over the top.  I’ve already bought both melon and prosciutto to recreate this lunch several days this week! 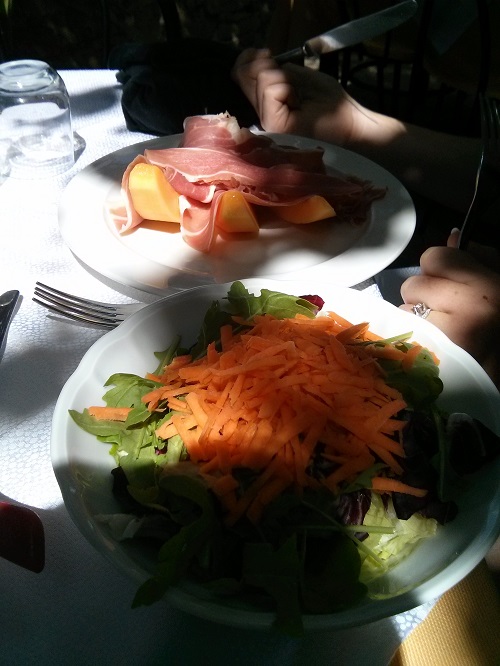 At this restaurant we were bothered by a few wasps.  Dan leapt up out of his seat several times, while I calmly placed wine glasses over the top of each wasp that joined us on our table. 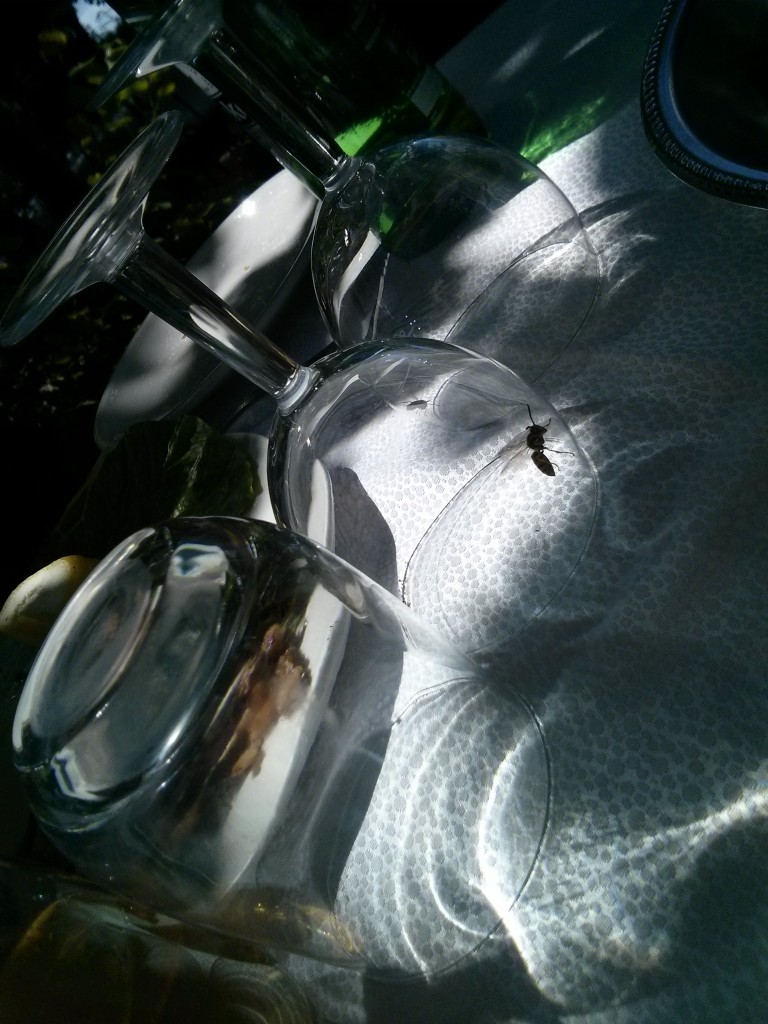 I was ready and waiting with a fourth glass (stolen from another table) but luckily, three was enough and after we had paid the bill, I quickly tipped the glasses upright again and we ran!

Every meal came with a bowl of bread.  I love bread.  It’s one of my absolute weaknesses that I can never resist, but it just wasn’t as nice as English bread.  I’m not sure exactly why not…it could be that it wasn’t quite as soft, that it never came with butter or that I had to resist the urge to nibble through the soft centre of the slices before breaking away the harder crusts, as that would probably have been frowned upon in the lovely restaurants we were in! 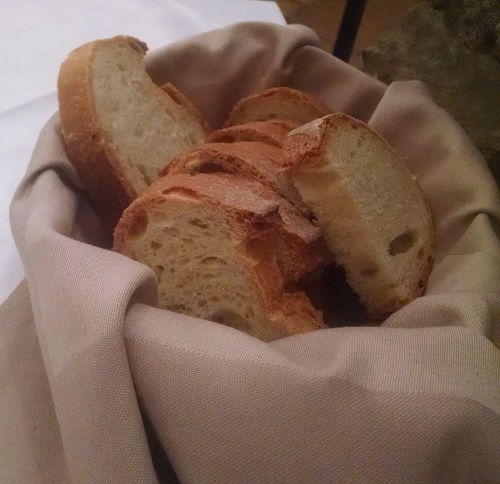 There weren’t actually very many restaurants in the town we were staying in (three!) so we repeated visits to some several times, and walked to other local towns at points as well.  Our hotel had a restaurant which was really good value for money, serving delicious food and so much of it.  For €25 each evening we could have an appetiser, first main course, second main course, side dish and dessert.  We didn’t even attempt to order from every course as we knew we would never finish it all, but we had some beautiful food from the hotel.

From top to bottom: Swordfish steak, pork slice, side of roasted vegetables, tiramisu, chocolate cake.  Dan was very excited about trying the swordfish and I tried a mouthful of his dish.  All of the meat I tried from Dan’s meals were lovely and tender and I’m sure I would eat much more meat if I lived over in Italy, as often I pick vegetarian dishes from a menu because I don’t like how tough the meat can be.

We didn’t have a huge amount of desserts whilst we were away.  Often, the main courses were filling enough and the sweetness of the house wine was enough to satisfy my sweet tooth after a meal.  We did have desserts for Dan’s birthday last Sunday though when I enjoyed this delicious chocolate pear dessert. 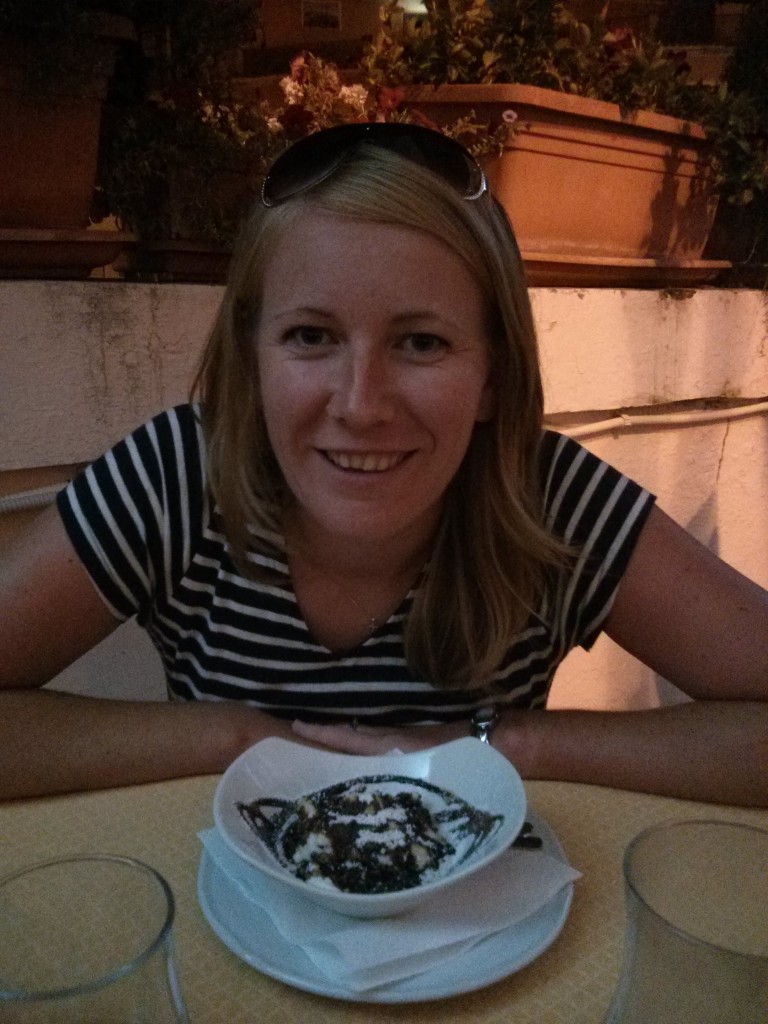 Have you ever been to an outdoor cinema before?
Do you enjoy trying new foods on holiday?  Do you eat differently whilst you are away?

10 thoughts on “Indiana Jones and the food of Italy”

Dan and I got together back at the start of 2007 whilst we were both at Staffordshire University and our groups of friends got talking on a night out. After END_OF_DOCUMENT_TOKEN_TO_BE_REPLACED

I have run a number of races since I first started blogging.  I’ve tried to blog about all of the races I’ve entered, and have split them below into the END_OF_DOCUMENT_TOKEN_TO_BE_REPLACED

So who am I?… I’m a 30 year old high school teacher of ICT living in Northamptonshire with my new husband Dan.  We met at Staffordshire University back in 2007 END_OF_DOCUMENT_TOKEN_TO_BE_REPLACED