Yesterday was the Go Beyond Northampton Half marathon.  I had been earmarked for sector lead of the Great Houghton stretch from mile 7 to just after mile 9 and so I ran this section with a friend and fellow marshal on Monday after work before attending a briefing meeting with other marshals of the race on Tuesday.  We ran about 9 miles of the course in total.  I say ‘ran’ but in actual fact we took several blackberry picking breaks on our run!  The blackberries are perfect for picking at the moment.  Nice and round and juicy. 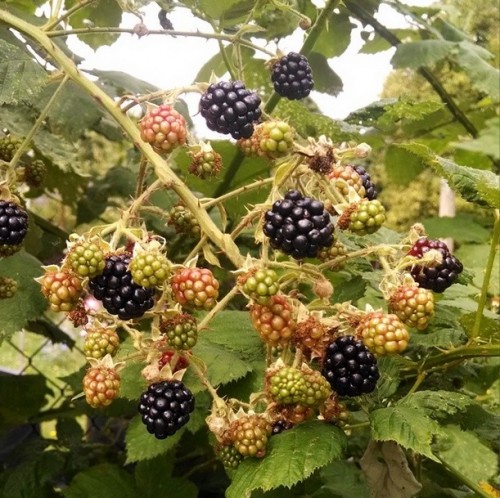 No time for blackberry picking on the day of the race though unfortunately!

I arrived at Race HQ just before it opened at 8:30am and it was so relaxed!  Bacon sandwiches were going round, the baggage van outside was empty, a few people were sat on comfy seats around the bar… 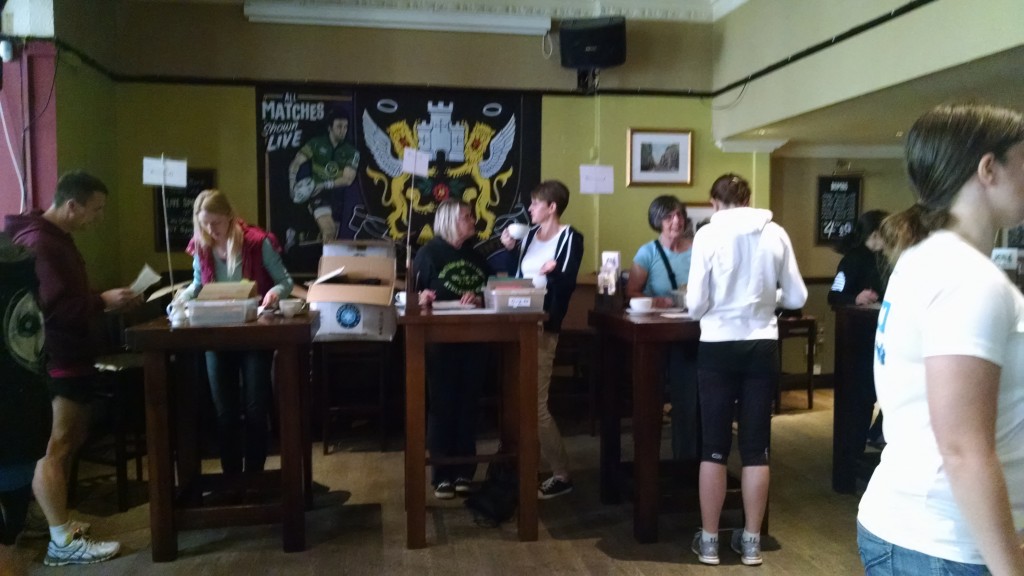 Fast forward an hour and that calm relaxing space was anything but!  It seemed like all of Northampton had descended upon the pub we had taken over with t-shirt, number and chip collection points.  They all left it to the last minute and 600 people collecting everything within the space of 15 minutes was not an easy time for us marshals who jumped in to help on the registration desk! 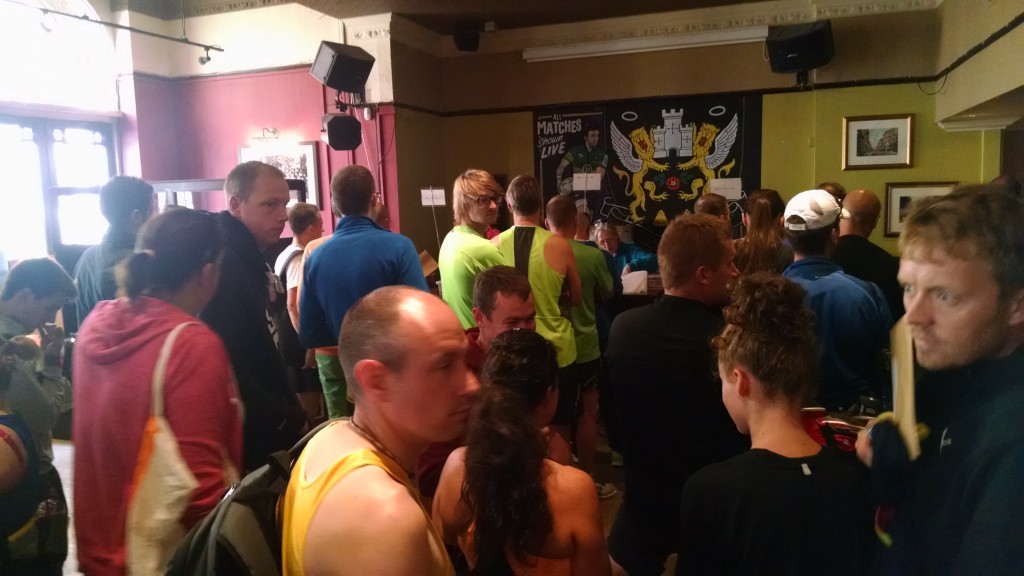 People were literally queuing out the door!  I had been scheduled to give a marshal briefing at 9am in Great Houghton with the marshals in my section but I think I stopped passing out t-shirts at 9:50am!  (The race began at 10am…I’m told on time!)  I collected the two marshals I was due to drop off at the first two checkpoints in my domain on the way and we left for our marshal briefing at the water station in Great Houghton. 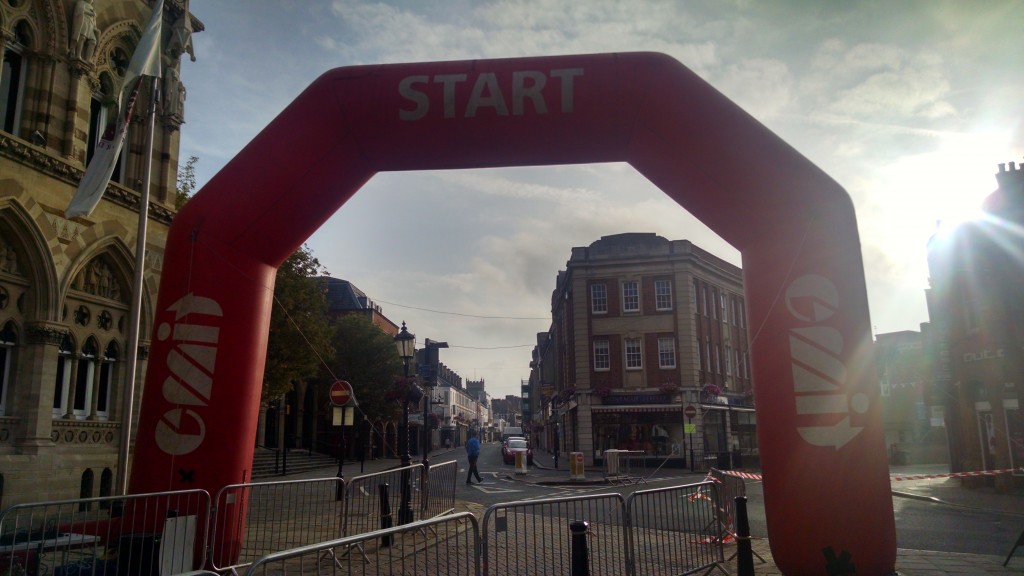 The fantastic volunteers at Great Houghton had already set tables up by the time I arrived and were ready to start pouring out water.  I gave a quick briefing to everyone involved and handed out the pile of reflective jackets in my marshal box. 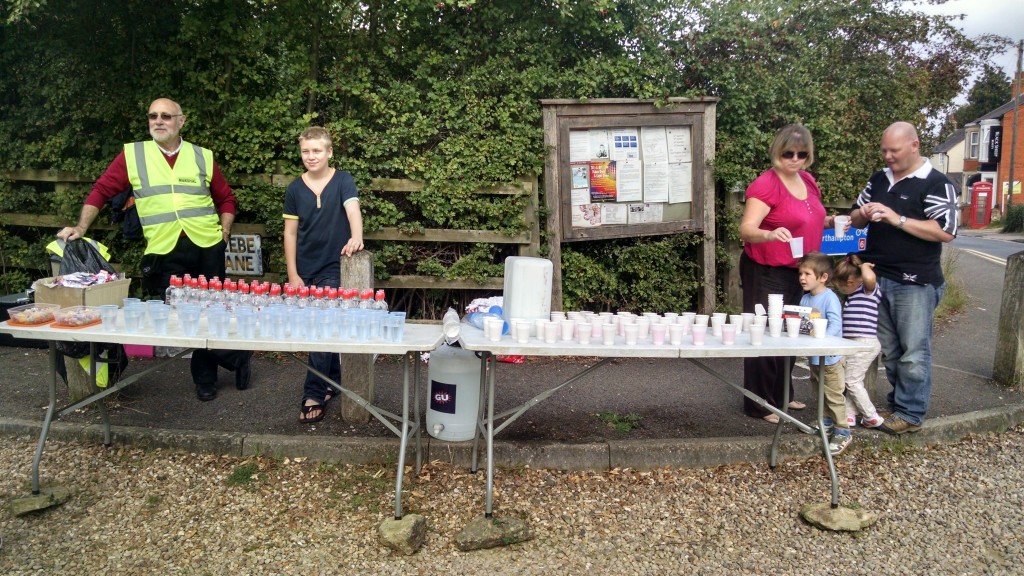 The water station was at mile 9 on the course so we still had more than half an hour to ensure there was enough water ready to go for when the front runners came through.  One of the team on the water station was a runner himself, but the others to my knowledge were not.  They were trying to guess the finishing times and were thinking about 95 minutes.  I guessed 70 minutes, and was the closest as the front runner won the race in 1:12:47.

I got the call from the lead of the sector before mine to inform me that the front runners had just passed him at mile 6 and that there were two right out in the lead.  This was my cue to head down the little sloping footpath just past the water station.  It was quite tight and a runner would not easily be able to overtake along this short section whilst still running along the path.  The path was full of dry leaves, which made the steep path slippy and I was stood at the corner where runners had to make an incredibly tight turn back on themselves (in the picture below) to head to the bottom of the slope where they joined the old railway track for a brief section of trail.  “Sharp bend to your right HERE, (pointing) down to the bottom and sharp bend back to the left!” was bellowed from my mouth every four or five runners across the span of about an hour.  As the lead bike sped towards me with the first and second placed guys behind he had to come to a quick stop before readjusting his bike back in the other direction.  I feared the runners would run straight into him but luckily he was off again in time. 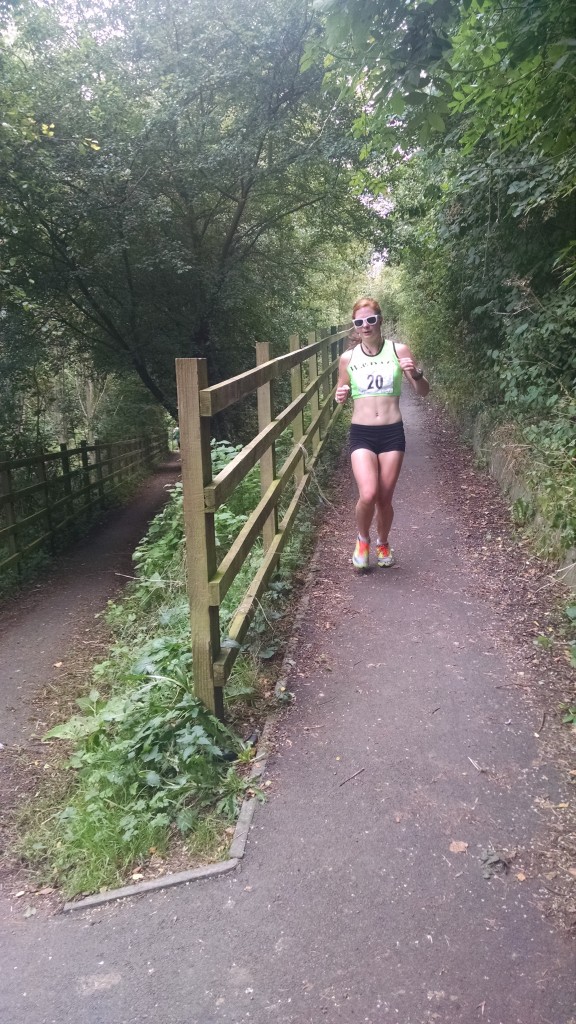 Here is our first club lady runner through, Kelly, who ended up coming in as second lady in just under 87 minutes.  I can’t imagine ever being able to run that fast!

As the runners became more sporadic at coming through my section I grabbed a bin bag with another marshal and we began Operation pick-up-all-cups so that we could pack up as soon as the last runner had been through.

The back bikes indicated that the two ladies walking towards our station were our final runners and so I left the marshals on the station to continue packing up whilst I collected by car the two ladies I’d dropped off at marshal points earlier in the day.

We returned to help pack up, but it didn’t take long at all as there were several of us there by this point so I thanked the volunteers on the station, leant the tables and spare water/gels against the wall and headed over to Delapre, where the finish was held.  Time for a quick breather as the last runners weren’t through yet. 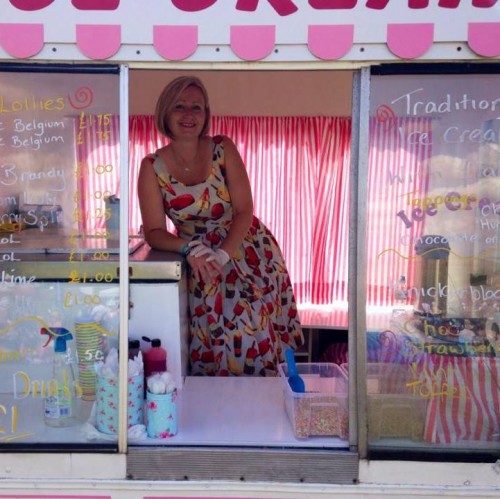 One of our club runners was there with her icecream van.  I love how authentic it was!  Very old fashioned style and her outfit matched the van perfectly!  I thoroughly enjoyed my cappuccino icecream with chocolate sauce and a flake whilst listening to the results and watching the prize giving. 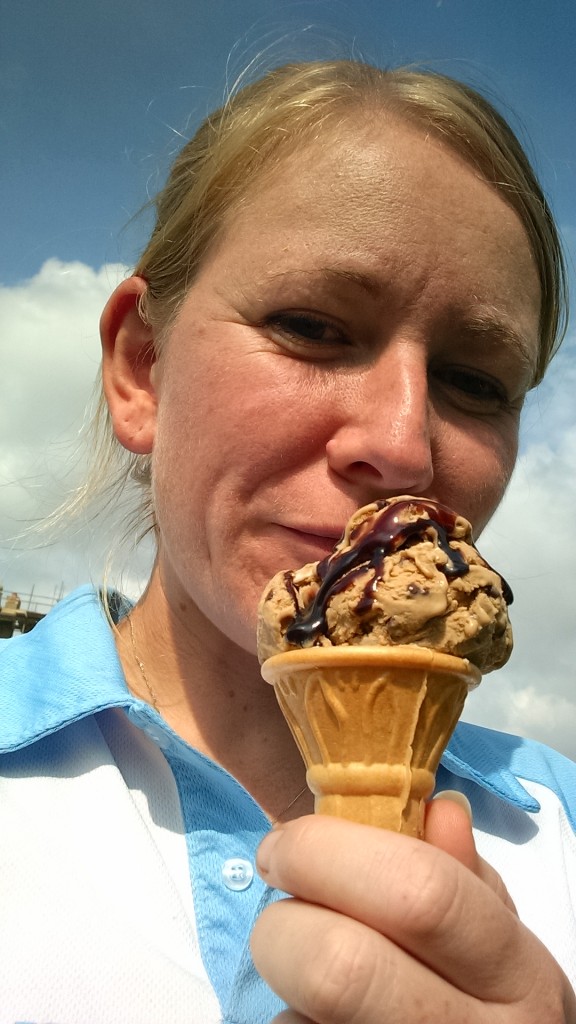 And then it was time to pack up.  Always goes so much quicker when there’s a large crowd.  After an hour of taking down and rolling up the red netting I offered to travel with another marshal to collect road signs from around the course.  There were several areas we couldn’t access with the van so I would rush off, pliers in hand to snip the signs down that were along the track.  I was exhausted by the end and I’m pretty sure I got more than a half marathon of running in myself chasing after all of those signs and jogging back to the van each time!

How early do you like to arrive before a race?  I try and get there at least an hour before I’m due to run unless it’s only a small race and I already have my number.  The latest I have been was when I arrived two minutes past the time the race was due to start as I had been stuck in bad traffic.  I ran through the registration desk with ladies pinning my number on as I legged it up the road to the start line only to find we had a ten minute wait as the guy starting the race had also been stuck in the same traffic jam!  At least I had a chance to get my breath back before the start!

10 thoughts on “Go Beyond Northampton Half marathon”

Dan and I got together back at the start of 2007 whilst we were both at Staffordshire University and our groups of friends got talking on a night out. After END_OF_DOCUMENT_TOKEN_TO_BE_REPLACED

I have run a number of races since I first started blogging.  I’ve tried to blog about all of the races I’ve entered, and have split them below into the END_OF_DOCUMENT_TOKEN_TO_BE_REPLACED

So who am I?… I’m a 30 year old high school teacher of ICT living in Northamptonshire with my new husband Dan.  We met at Staffordshire University back in 2007 END_OF_DOCUMENT_TOKEN_TO_BE_REPLACED