The town I live in is rather small.  We have a Co-op, a Spar, a butcher, a baker, a small handyman store, a couple of pubs and several takeaways.  In the grand scheme of things it is not a massive town.  It’s plenty big enough for Dan and I and our day-to-day needs, but if we need to buy something other than bread or milk we tend to make our way to the nearby, larger town of Wellingborough, where there is a little more choice.

The circumference of our town is three miles.  I know this because I often use it as one of my easy runs on a Monday evening.  No need to think, just follow the path all the way round until I arrive back at my house again.  If I want to run further than three miles though (which I often do) at some point I will need to run along a stretch of road which does not have a footpath alongside it.

This doesn’t faze me too much.  Most of my running tops are quite bright, if I ever have to run a stretch of road at night, I am sure to wear my headtorch and usually a reflective jacket as well.  I never wear headphones whilst on the road so am aware when cars are heading towards me and where possible, I run along the grass verge until the upcoming car has passed and I can safely continue along the road.

One of my regular six mile routes heads out of town along a faster-moving road for just less than a mile before turning off onto a narrow country road and eventually winding back round into the bottom end of my town again.

I would never run the route at 8:30am or 5:15pm as during working hours, this route becomes much busier.  Several people either walk or cycle from the village the road leads to up to the town I live in as there is a large enterprise park on the outskirts of my town.  The council must have established that the road was too busy for the workers to travel along safely during peak hours as earlier this year they decided to add a footpath alongside the edge of the road.  Excellent…

…except that the footpath has eaten up into the space available on the road and that along the majority of the road the path has been identified by adding shingle to the verge. 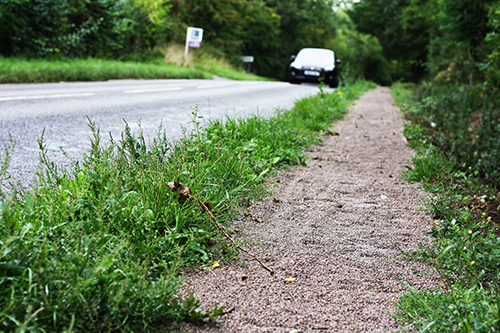 The shingle is pretty deep – I’m not sure what it is laid on but it is incredibly uneven.  Bikes now choose to ride along the ‘footpath’ each day, causing great ruts in the path and making it unsafe for other bikes to travel along in places.  The footpath has therefore become very uneven and I wouldn’t want to travel along it with a small child, an elderly person, and I don’t want to use it as a runner.  One slight wobble and you would find yourself in the path of an oncoming fast-moving car, the driver having been under the impression that you were safely travelling on the footpath to the side of the road. 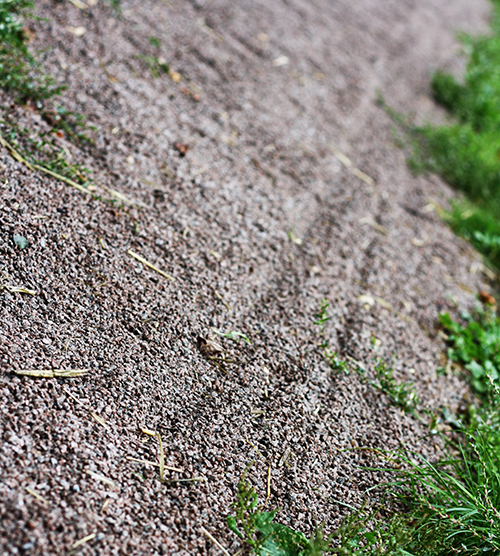 Not only is the footpath incredibly rutted, but the hedge alongside it seems to no longer be maintained.  I guess someone at the council feels that there is no need, now that the brambles aren’t growing over onto the road and in the way of motorists. 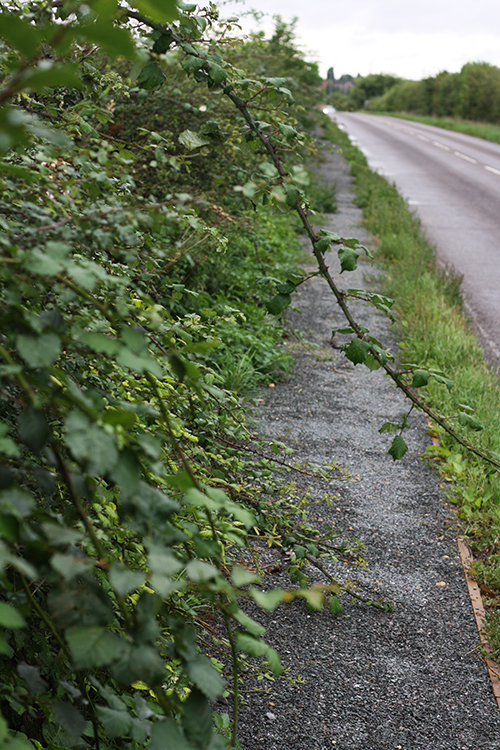 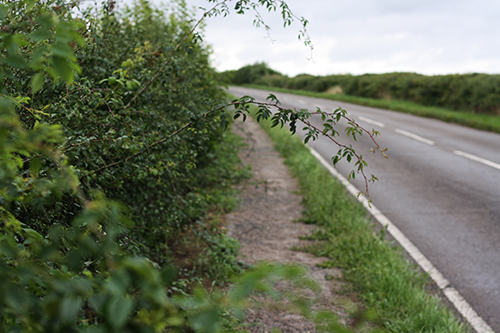 The brambles make it rather difficult to use the path in places and along some stretches, the kerb seems to be a large amount higher than a regular kerb is for no apparent reason, whereas in other places, it is at the same level as the road. 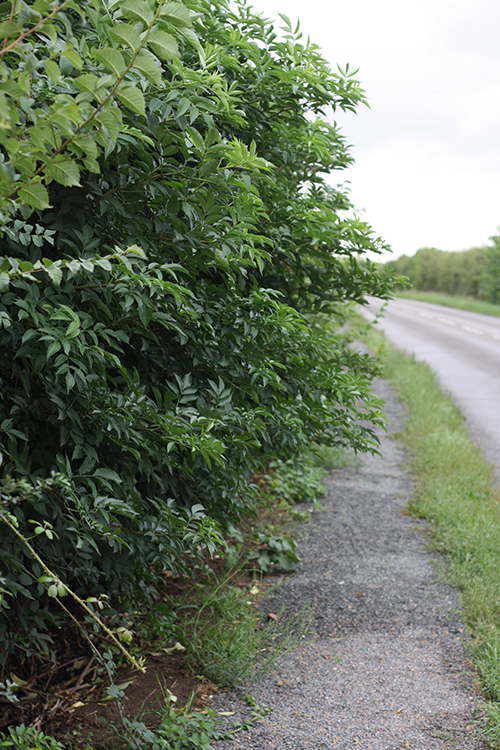 When you almost reach the village at the other end, the path stops with no alternative for several metres, before joining onto an existing path that has clearly been there for quite some time and is in desperate need of replacing. 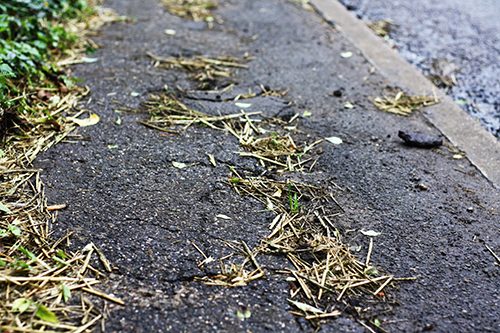 A tractor carrying straw must have been along since running the route on Tuesday as several of the holes and cracks were filled with straw when I went to take photos of the pavement this morning so it is hard to tell from a photograph just how holey it is!  The pavement also leans from the verge into the road, so as you run along it you are always leaning towards the traffic.

Last Tuesday my planned run was six miles.  The route I just mentioned is a perfect six miles starting from my house, so I waited until the work traffic had passed and headed out for a run in the middle of the afternoon.  I headed out at 12:47pm according to my Garmin.  On days that I have run this route during the past Summer I tend to run along the road until a car is headed towards me, at which point if it is safe to do so I jump up onto the shingle path.  Often, it is not safe for me to do so at the time (jutting out brambles, other people, a higher kerb…), in which case I tend to remain on the road and let the oncoming car overtake me instead.  The road has two-way traffic, is fairly straight, with good visibility along the entire length.  During the middle of the day there isn’t a great deal of traffic along this road.

During Tuesday’s run, as I was about to reach the village at the other end of the stretch of road another car approached rather quickly.  I was at the point where there was no pavement for me to run on.  The car in front slammed it’s brakes on as a car was also coming in the other direction on the opposite side of the road so he was unable to overtake me.  I continued running towards the car on the road, reaching the pavement which is in need of updating before I reached the car.  Rather than jump up onto the pavement risking a fall I continued along the road.  The car had already stopped by this point.

I received a lot of abuse through the car window for not running on the pavement so that he could continue his journey possibly three seconds sooner.  There were a lot of arm gestures and loud shouting from inside the car which was directed at me.  The windows were closed, but I like to think I’m fairly proficient at lip reading.  The gentleman repeatedly and aggressively gestured at the pavement, prompting me to also gesture at the shockingly-maintained pavement and shout back.  Although I knew that he probably couldn’t hear me it made me feel a little better.

Luckily, he didn’t get out of his car.  Clearly in too much of a rush on his journey and he sped off up the hill in a rage instead.  I do use the pavement where it is safe to do so, however I didn’t want to twist my ankle or fall out into the road on this occasion.  It left me feeling rather wound up and annoyed though, and I continued my run feeling rather shaky.  I would never dream of shouting at someone running who was out running along the road, and would assume that there had been a good reason for them doing so in the first place.

Was I in the right or wrong?
Have you ever received abuse from a motorist before?

Dan and I got together back at the start of 2007 whilst we were both at Staffordshire University and our groups of friends got talking on a night out. After END_OF_DOCUMENT_TOKEN_TO_BE_REPLACED

I have run a number of races since I first started blogging.  I’ve tried to blog about all of the races I’ve entered, and have split them below into the END_OF_DOCUMENT_TOKEN_TO_BE_REPLACED

So who am I?… I’m a 30 year old high school teacher of ICT living in Northamptonshire with my new husband Dan.  We met at Staffordshire University back in 2007 END_OF_DOCUMENT_TOKEN_TO_BE_REPLACED