On Sunday I ran the Dunstable Downs 20m Challenge event as my last long run before Mablethorpe Marathon in three weeks time.

The race was part of our club trail series, and following the race at the weekend I am now sitting in first female position overall, with another four races in the series remaining.

My aim for the day was purely to comfortably get the distance in my legs before beginning my marathon taper.  I didn’t want to treat it as I would a road race – with continuous running.  Instead I was aiming for continuous movement throughout the course to reach the end comfortably, walking the hills and through all of the checkpoints.

The weather was rather chilly in the morning and I left taking my hoodie off until the last possible second, shivering in my shorts and t-shirt that I had put on underneath my club vest.

There were distances of half marathon, 20 miles and full marathon on the day, with all three distances heading off in the same direction at the start, before later splitting off to complete their own loop back to the football centre we had started from. 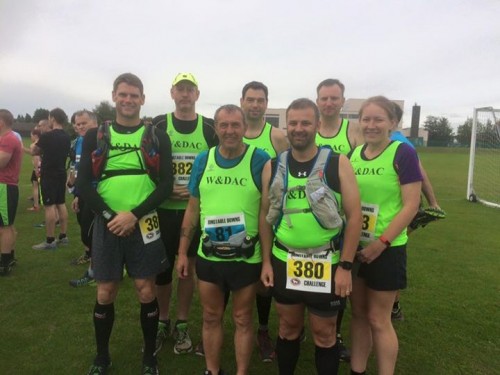 The race was very cheap compared to many (£16.55), but would have cost just an extra pound to top up to marathon distance.  I had to argue with myself for a little while that it would not be productive if I were to enter the marathon instead, despite it meaning that I would be one marathon closer to completing the still-so-far-away 100 marathons!  I wanted my sub 5 in three weeks too badly to jeopardize things in the end though so managed to control my finger when it came to entries, sticking with the 20 miles.

I didn’t sit down to read the race instructions until the night before the race.  I had meant to do this earlier in the week but had not gotten round to it.  It wasn’t until this point that I discovered we were supposed to have printed off our own map and directions to bring along!  I knew that it was a self-navigating course but I had assumed that we would be given instructions on arrival along with our numbers!  Without a working printer at home I realised I would have to begin hand-writing instructions, as well as taking a photograph of them on my phone.  Luckily, a friend agreed to print me off a copy before I got too far along writing them up.  Couldn’t have dealt with cramp in my hand on race day!  I needn’t have worried though – when we turned up the following morning there were piles of both maps and instructions printed out for runners that had forgotten theirs.  During the pre-race briefing we were also told that the majority of the course had also been marked this year, following a handful of runners getting quite lost the previous year. 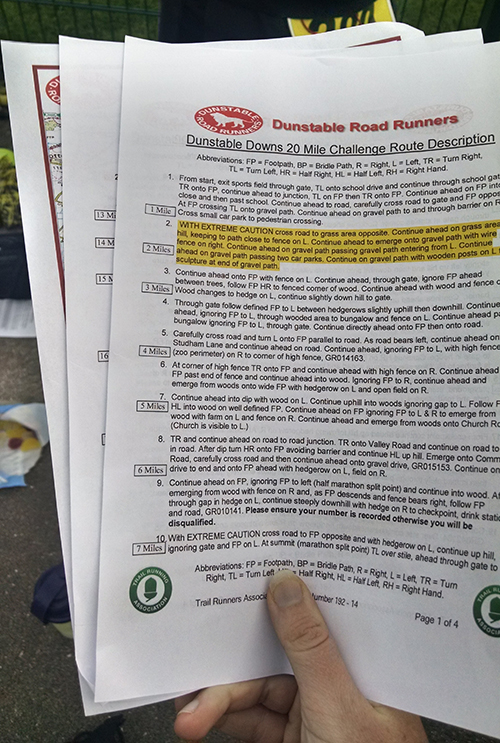 Good job I didn’t end up having to write them all out.  There were pages of them!

Despite not discussing our plans before the race, I ended up running the race with another runner from our club, Ian.  Good job too, as it was Ian that spotted the wallabies hidden in the long grass as we ran alongside the outskirts of Whipsnade Animal Park.

I’d had mixed feedback on how hilly the race was.  One person told me it was incredibly hilly and another told me that there was no hills of any size on the course.  I decided it was probably best just to wait and see in the end.  Turns out it looks pretty hilly on the course elevation profile, but I didn’t really notice the hills when I was out there – they weren’t so tough!  Especially after having run those 19 hilly road miles the week before!

One hill I did notice was the steep downhill to the first checkpoint at mile 7.

The turn-off for the half marathon runners was just before we reached the downhill although several of the runners had missed the turn-off point despite it being clearly marked.  We met one poor guy heading back up to the top of the hill who had just run all the way down to the checkpoint before being told to turn around and head right back up again so that he was on the correct path! 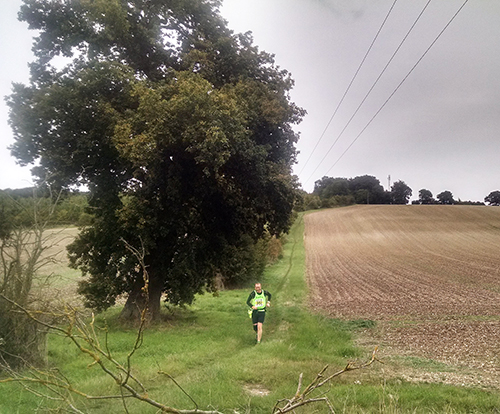 The marathon runners then left us about half a mile further up the track.
The next rather memorable part of the race was as we headed down into a large valley through several fields.  Fields that had recently been ploughed! 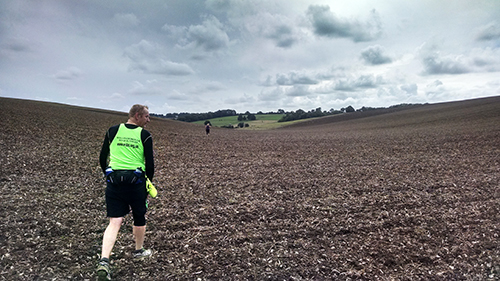 Too close to marathon day to risk turning an ankle, so we walked across the worst parts of this field, using our walking time wisely to catch up on map-reading directions, eating, drinking and taking photographs!  The mud was rather clotted and the ground rather stoney and rutted.

At mile 10 we came across our second checkpoint of the race.  Just an informal one – a guy holding a clipboard and a chair which was filled with bottles of water and Twix bars.  This was the point where the marathon runners rejoined those running the 20 mile race and just as we arrived here, the lead marathon runner came through.  It was a long while afterwards before we saw the chap in second place, so I presume that the guy we saw come past here was the eventual winner.

Ian and I split a Twix and continued up another gradual hill.  This one must have been alongside a sewage works or something, because it was incredibly smelly! 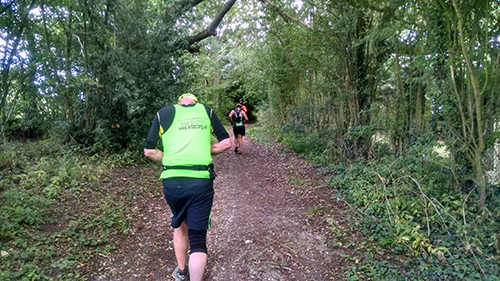 It had started to get warm by this point, so please excuse the frazzled hair and sweaty neck look!  😉 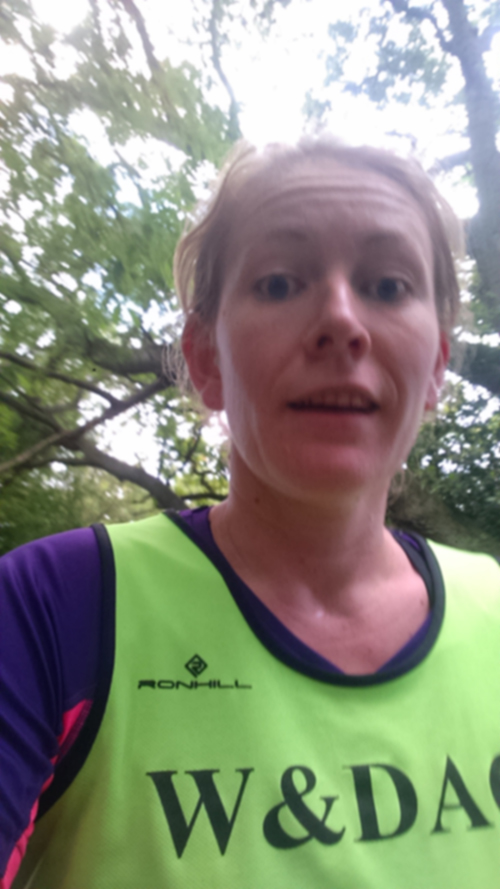 The next checkpoint had it spot on.  A full on feeding station!  There were gummy sweets and flapjacks, cake and shortbread.  I helped myself to a slice of flapjack and piece of shortbread.  Nice little boost to get round the final few miles!  One of the runners from our club later pointed out that there had been no savoury goodies here though, which I hadn’t spotted at the time.  If I had been running a longer race I would have wanted savoury over sweet.

There were a couple of spots along the course where it was not marked – confusing us slightly as we had begun to expect the orange square lions which had been dotted along the course so frequently at the beginning.  A few times we doubted our route-decisions, but I don’t think we ever made a wrong turn (until possibly just before the end!)

The last few miles were the same as the first few and took us along the ridge of the Downs.  Looking over the edge you could see gliders and planes constantly taking off and returning to the field again.  There were lots of kite fliers and dog walkers out by this point, enjoying the weather since the heat had increased.  Here I am at 19.5 miles along the top of the ridge. 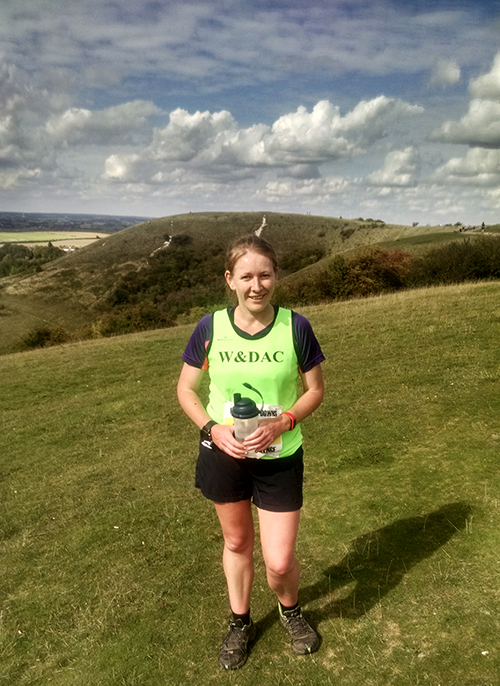 Ian offered to take my photo here, but even if he hadn’t, I could probably have asked another runner to take it for me.  Gotta love trail races!  Couldn’t imagine doing this with half a mile to go in a road marathon!

…Except it ended up being more than half a mile to go.  As we reached a fork in the route Ian insisted that he recognised the trail on the right.  I could see more runners up ahead on the path to the left so assumed that they were probably headed in the right direction.  Many of the runners had seemed to have run the race previously, or were local to the area.  I asked a couple that were sat at the side of the path and looked as though they had been there for a while.  They backed me up that it should be the left path we should take.  Ian still insisted right, so right we went!  I’m not sure that we took entirely the correct route here, but it came back out onto the main track again before long and I don’t think that it added much, if any distance to the run.

On the race instructions, the 20 mile race was labeled as 20.8miles, and my Garmin recorded 21.13 in total.  Last long run done!  Next weekend I shall be running Royston trail half marathon, and then slotting in a small and easy run the following weekend, which will be the last weekend before Mablethorpe.

After crossing the line, Ian and I joined the other Wellingborough runners on the bank at the finish line to wait for our sole marathon runner to come through the finish. 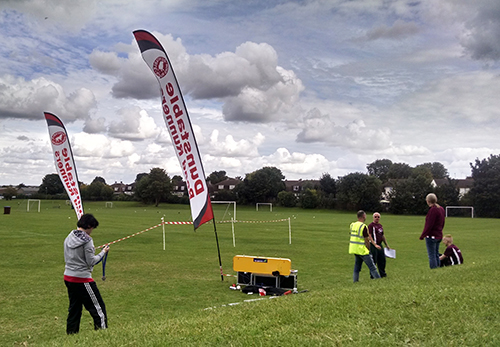 The others estimated he would be another 45 minutes or so, so I took this opportunity to collect my kit bag, which I’d left in the luggage area and I also changed into my hoodie for warmth.  Whilst inside, I picked up a ham roll and slice of cake – an additional free incentive for all runners to complete the course! 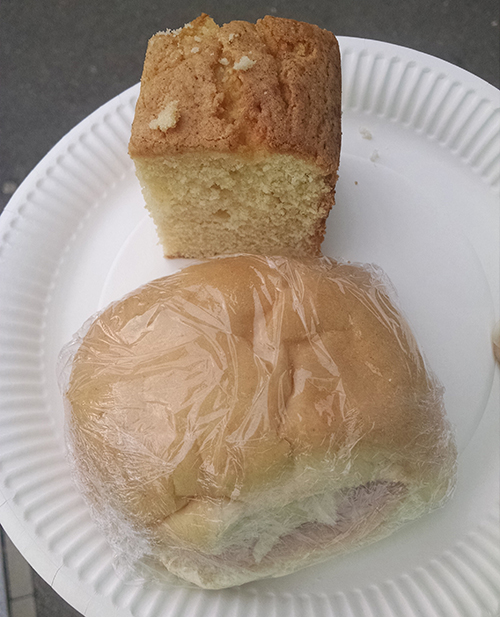 The medal is a nice one, and shows a lion with the words I conquered the Dunstable Downs Challenge 2015′.  The race distance was written on the ribbon and each distance was also represented by a different colour.  Yellow for the 20 milers. 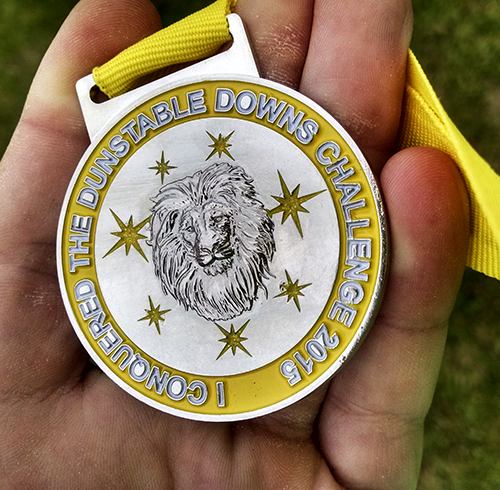 Are you training for an Autumn marathon/half?
Have you attended races where you get free food at the end?!
Ploughed fields – run them or walk them?!

12 thoughts on “Don’t leave reading the race instructions until the last minute!”

Dan and I got together back at the start of 2007 whilst we were both at Staffordshire University and our groups of friends got talking on a night out. After END_OF_DOCUMENT_TOKEN_TO_BE_REPLACED

I have run a number of races since I first started blogging.  I’ve tried to blog about all of the races I’ve entered, and have split them below into the END_OF_DOCUMENT_TOKEN_TO_BE_REPLACED

So who am I?… I’m a 30 year old high school teacher of ICT living in Northamptonshire with my new husband Dan.  We met at Staffordshire University back in 2007 END_OF_DOCUMENT_TOKEN_TO_BE_REPLACED