The Colworth Marathon Challenge is one of the most talked about events in our area.  It was probably the first race I had heard about after initially joining my running club and one I really looked forward to taking part in.

The event is run over three days; a 5 mile run on Friday evening after work, an 8.1 mile race the following morning and a half marathon on the Sunday.  All offroad and together totaling the full marathon distance, hence the ‘Marathon Challenge’ part of the name.

Despite having called myself a runner for five years now, it wasn’t until last year that I got to run the Colworth Marathon Challenge for the first time.  I loved it, although found it hard to judge the pacing across the three days, finding the third day in particular rather challenging.  I was looking forward to having another crack at the event this year, so when I found out that I was pregnant I knew that I wanted to still head over and support our runners at the event.

A few people suggested that I should still go ahead and run the 5 mile race last Friday evening, but I’m at the point in my pregnancy now where I know I should keep things fairly easy and ‘racing’, especially at races dominated by club runners such as this one, would I think encourage me to overdo things and potentially strain myself from doing so.  So, I decided not to enter on the Friday evening.

When it came to the day – a day which followed days and days of constant drizzly rain, I knew I had made the right decision.  At any other time, I would have loved the event and relished the mud that caked the trail, but at six and a half months pregnant, it probably wasn’t the best time to go slip-sliding around the woods. 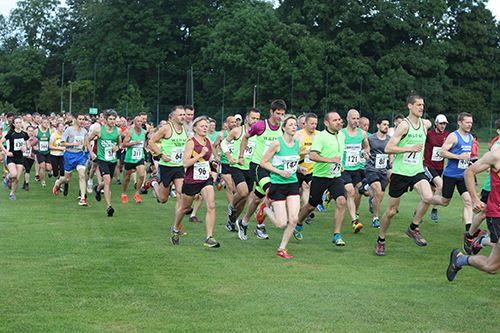 Although it was kind of damp out there, from our view by the finish line on the field things didn’t look overly soggy or saturated.  When runners started coming through the finish looking like this though… 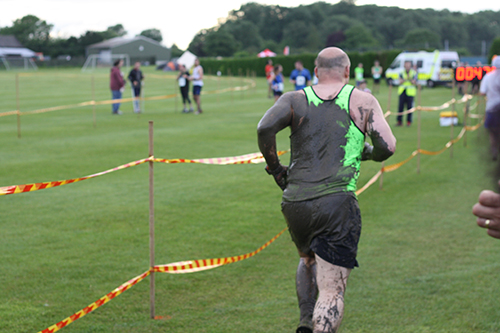 …we knew it had to be pretty bad once the runners turned off the field and were out of sight! 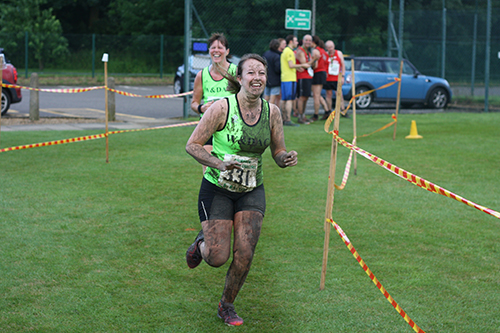 Oh how I wish I’d been able to run.  It looked like so much fun!

The Friday evening event welcomes dogs along with their owners and all the dogs loved it too.  This dog was described as a ‘floating cloud’ by one of our members when we spotted them at the far side of the field! 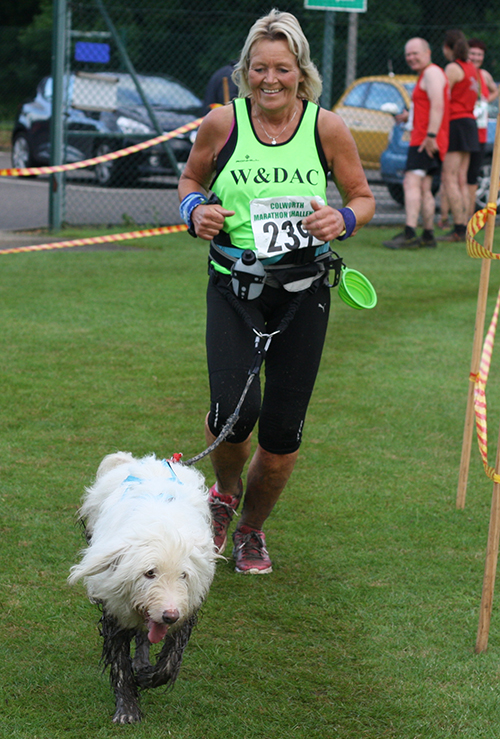 Although most runners came back with flecks of mud somewhere not everyone returned caked in the stuff! 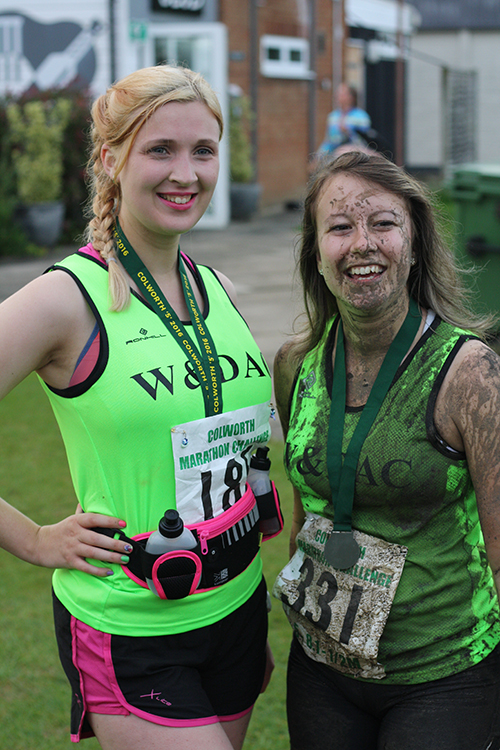 Everyone came over afterwards really buzzing from the race as well which didn’t help me feel any less upset about missing out.  Lots of people exclaimed how much I would have loved the run that night.  I know I would have done!  Last year the event was really warm and the ground hard, so a totally different experience to the one runners had at the weekend.

I did enjoy catching up with a few injured runners and partners whilst waiting for our lot to come back through the finish, but playing photographer is definitely not as much fun as being out there joining in.

We were still four runners and a dog short from our original lineup after nearly ninety minutes after the start and we were beginning to get worried.  Eventually, just as some were about to head back out on the course to check all was OK, we spotted a crowd of three and a dog run into the field at the far side – off in the distance.  As the weather had been fairly awful that evening, dusk had seemed to appear sooner than usual and we struggled to make out which of the four were there.  It wasn’t until they got much closer that we realised the one who had begun with a dog was no longer there, and when the three made it over the line they headed straight over to the ambulance on site, where our final member had been taken with a suspected broken leg following a slip in the woods.  (Although it has luckily since been confirmed as a bad sprain.)

I didn’t head over for the Saturday event but on Sunday I packed up my camera and got ready to head out all over again.

Same start line, different route.  The half marathon is a two lap course, which was partly why I chose to go and support on the Sunday rather than the shorter distance at the Saturday event as I knew I would be able to see the runners twice out there and that there was more chance of them being nicely spaced out on the course.  I saw the runners off at the start before chatting to a few supporters and leisurely taking a stroll about a half mile back along the course to get into position. 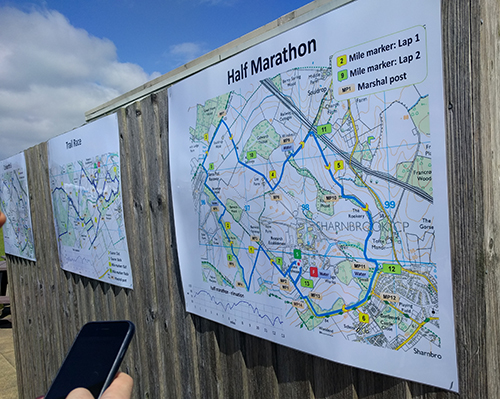 Here it was nice and muddy as runners were exiting the woods for the final stretch through to the finish. 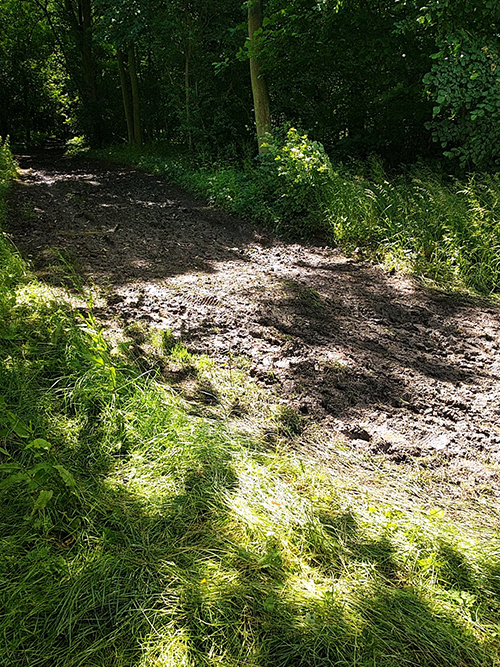 From my spot along the track I could also clearly see the marshal point ahead, where the marshal had thought ahead with some upbeat soundtracks playing from his car, and even had a bit of a dance whilst waiting around for the runners! 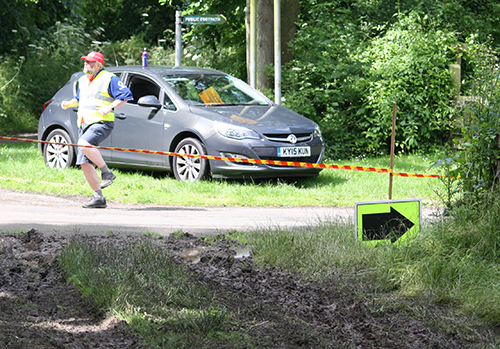 A perfect spot for photographs! 😛

It ended up being quite warm before long and my extra layers were soon removed.  Despite the day being much brighter than the previous few, the light was limited in the wood, not making for an easy photo.  Eventually I decided to go and join the marshal out in the sunshine where the light was brighter after having seen a handful of runners already come through on their first laps.

It was still pretty slippy out there, although now drying fast with the warm day.  The marshal told me that three had gone down in the mud at this spot on the Friday night.

The only people who ended up covered in mud on the Sunday though were those that got too close to Kev when he had mud in his hands…! 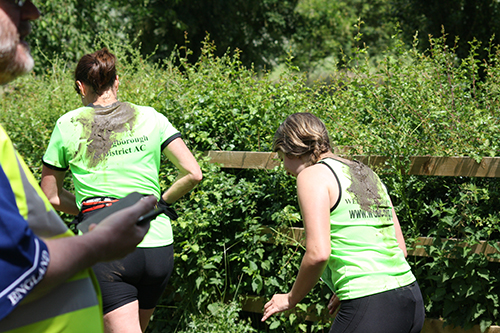 The finish on the Sunday is the same as on the Friday night – a lap of the field and through the gantry.  After I had photographed all of our runners at the marshal point on at least one lap and when there was a large enough gap before our next club runners were due to come through I nipped back to the finish to capture some of the efforts over the line. 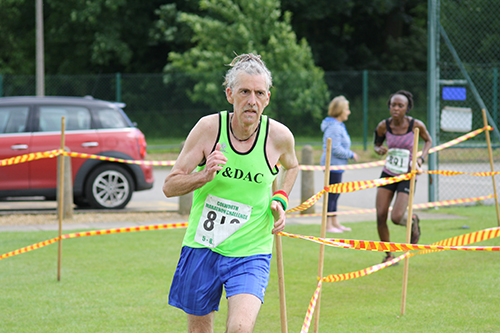 I posted most of my pictures up on Facebook on Sunday afternoon which then attracted a fair amount of comments and likes from runners who had been out over the weekend.  I love looking through the photos of an event afterwards and having a large supply of images available also helps when it comes to organising the club Runner of the Year video in December!

Have you run a multi-day event before?
Do you like to see photos of yourself running?
Have you ever been along in a purely supporting role at a race?

Dan and I got together back at the start of 2007 whilst we were both at Staffordshire University and our groups of friends got talking on a night out. After END_OF_DOCUMENT_TOKEN_TO_BE_REPLACED

I have run a number of races since I first started blogging.  I’ve tried to blog about all of the races I’ve entered, and have split them below into the END_OF_DOCUMENT_TOKEN_TO_BE_REPLACED

So who am I?… I’m a 30 year old high school teacher of ICT living in Northamptonshire with my new husband Dan.  We met at Staffordshire University back in 2007 END_OF_DOCUMENT_TOKEN_TO_BE_REPLACED