As I mentioned in my parkrun post last week, I’m hoping to up the amount of parkrun tourism I complete this year.

Last weekend, Laura had heard of a new event taking place in Milton Keynes, so we toddled off to the inaugural Lingford Wood event.
I wasn’t sure how long it would take to get there, so left just before 8am. Despite being further away than my home event at Northampton it was actually a lot easier to travel over to and parking at the designated car park the other end was super easy as there was a marshal in an orange parkrun top stood on the entrance to the car park who was then directing runners along the short walk to where the race briefing was to take place.
Laura and I met another runner from our club there as we arrived. (The guy I mentioned in my post last week who has run in 31 different parkrun locations so far.) Laura started a conversation with him about her parkrun times dropping recently due to her injury and my pregnancy. Turns out, his wife is also pregnant at the moment and due on the 5th Oct (the day after me) with plans to deliver in the same hospital! 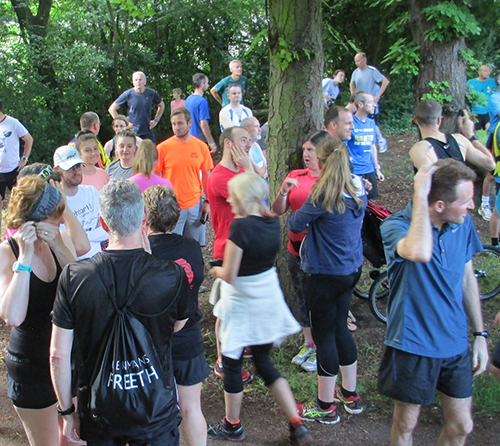 (I’m in the blue jacket at the front with my back to the camera.)

Apparently the event organisers had been nervous that the new event last week would attract large numbers and had been pushing the fact that the other Milton Keynes parkrun was offering a pacing event on the same day in the run up to the event.  There ended up being the perfect amount of starters on Saturday morning though with 188.

We had the pre-race briefing where the Race Director mentioned that he had a sign up list for anyone looking to marshal at future Linford Wood parkrun events.  I haven’t seen a sign-up list at any other events before, but it clearly works, as I believe they have six different Race Directors lined up for the coming weeks.  All of the marshals and volunteers on the day were absolutely superb and very encouraging.

When we were directed along the track towards the start I took a short detour to the edge of the path in order to drop my jacket off by the tree where some marshals were stood.  We would be running past the tree on the way out, and then we would pass it again just before the finish. 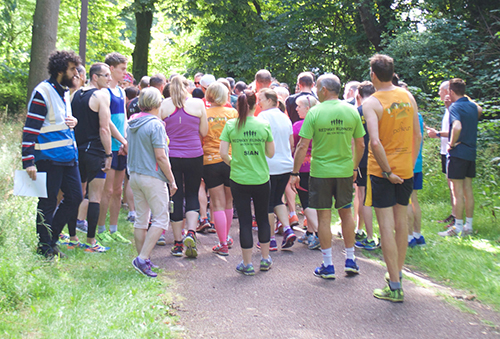 (I’m in the purple tank top in the middle of the photo.)

What we hadn’t realised was that upon reaching the start line, we needed to push our way through the already-forming line of front runners, as we would be running back in the direction we had come from.  Laura and I were some of the last runners to make our way to the start and were desperately trying to squeeze our way through to the back ready for the start, but never made it and instead ended up just turning around when the run began.  Much closer to the start than I am comfortable with at the moment!  There wasn’t a lot we could do though, except spend those first several minutes getting overtaken by faster runners! 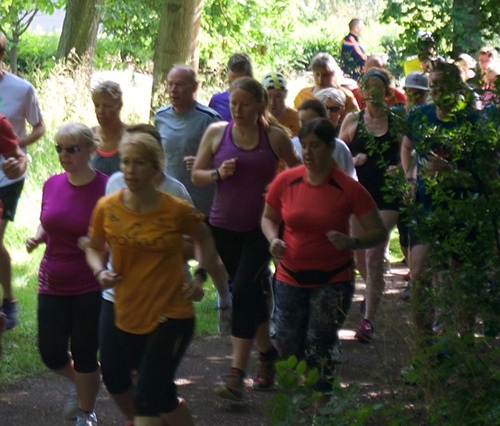 I had been in two minds whether or not to remove my jacket before the run, but I was so glad that I had.  It was a really warm, muggy morning and I was glad to be wearing one less layer out on the course.  The whole route is through woodland, so we were actually pretty sheltered from the sun which made things a little easier.  Still not comfortable wearing my loose shorts over the baby bump I had opted for a pair of very thin three-quarter tights and this combo seemed to work well to keep me relatively cool out there.

I felt better and better as the run went on, and managed to pick my pace right up towards the end. 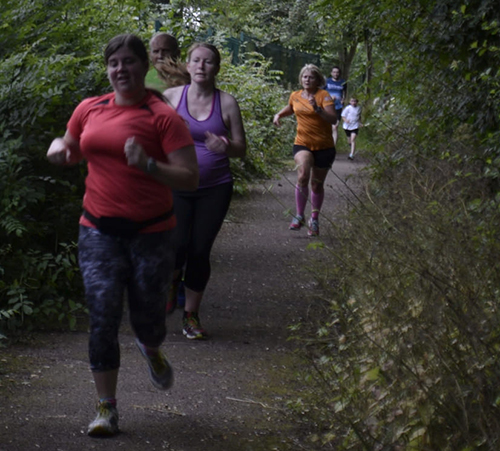 Paths are narrow on the course, and it was very twisty-turny out in the woods along several of the tracks.  There wasn’t a huge amount of space for overtaking in some parts and brambles and nettles encroached onto some of the edges of the footpath in places.  I’m not sure that it makes for a ‘fast’ course as such, but definitely an enjoyable one and one I would like to try again when I’m back to full fitness later in the year.

There were loads of 250 parkrunners out at the event.  For one of them it was their 381st parkrun!  I don’t think I’d even seen a 250 parkrun t-shirt before!  I still haven’t worn my 50 parkrun top as it arrived when my bump was too big and I didn’t want to stretch the material so that it looks silly after I’ve had the baby.

All pictures are from the Linford Wood parkrun Flickr page.

What is the highest number of parkruns run by someone you know?

Dan and I got together back at the start of 2007 whilst we were both at Staffordshire University and our groups of friends got talking on a night out. After END_OF_DOCUMENT_TOKEN_TO_BE_REPLACED

I have run a number of races since I first started blogging.  I’ve tried to blog about all of the races I’ve entered, and have split them below into the END_OF_DOCUMENT_TOKEN_TO_BE_REPLACED

So who am I?… I’m a 30 year old high school teacher of ICT living in Northamptonshire with my new husband Dan.  We met at Staffordshire University back in 2007 END_OF_DOCUMENT_TOKEN_TO_BE_REPLACED