Last Sunday I marshaled over at Brixworth for the Pitsford Triathlon, put on by Go Beyond. Regular readers will know that I regularly marshal at lots of the Go Beyond events. Steve Adams, the Race Director is a member of my running club.  I fell into marshaling for Go Beyond a few years ago now and it is something I have continued to do, as I enjoy being the other side of the tape now and again, and love to meet new runners.

I last marshaled at Pitsford in 2014. I couldn’t make it last year as it fell on the weekend that we moved house, but I added my name to the marshal list again once the date was confirmed for 2016.  Marshaling at a tri is a little different from marshaling at the many ultras and other running events I have helped out at in the past.  For one, there are lot more marshals required as there are three elements to the event.  I marshaled at the Shires and Spires ultra back at the start of June and commented on the blog at the time about how nice it was to be so knowledgeable about the course and the race to entrants as they questioned me on the registration desk, having run the course many times over the past few years, and having experience of both running and marshaling at a variety of ultra events now.
…Complete opposite at Pitsford!  Different swim times?  Cap colours?  Where to stick your number?  Huh?!
Although I’d never say never, a triathlon doesn’t really appeal to me right now.  I’m not a particularly strong swimmer, (for some reason my arms always end up doing all of the work and I only seem to kick my legs occasionally when I remember to do so) and I hate the feeling of bending over on a bike.  The thought of leaping into open water with hundreds of other swimmers with legs and arms and bobbing heads everywhere is also a little off-putting if I am honest, although our club is putting on a ‘Try a Tri’ event in August which I have said I’ll help marshal at this year and which I could potentially have a go at next year if it goes ahead again…
…We’ll see.
As usual, I was down to start on the registration desk last weekend.  Working on the registration desk is one of my favourite marshaling roles.  You get to meet and greet all the competitors and the role requires you to be super organised and think on the spot – skills I’d like to think I possess(?!)  Several of the competitors had been to collect race packs the previous evening, so we weren’t quite as busy this time round as we have been at some events in the past. 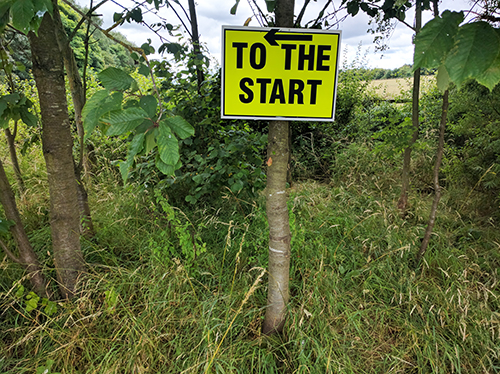 The swim began at 7:30am so from this point I was available to load my car with two large water containers, a box of plastic cups and my fellow marshal for the morning, Cathie – before heading over to my marshal spot at the far side of the reservoir on the run course. 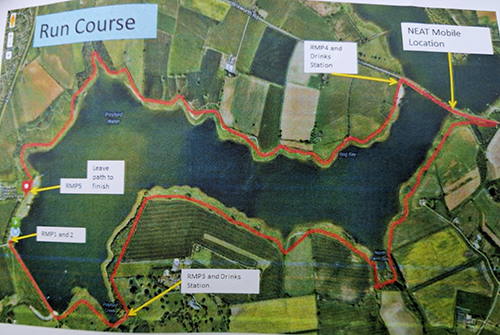 We had a few problems finding the spot by road.  We’d both run round Pitsford dozens of times in the past, but never had to access any of the route by car before!  We found it in the end though after lots of map consulting, a chat with a random stranger and a bit of good luck.

As I was turning the car around to park it up by the spot we would need to get the tables out at, another car sped up towards me on the road.  They had to wait for maybe 5-10 seconds as I finished turning the car along the small lane.  (I had taken Dan’s new car so that I was able to utilise the extra boot space, so it was a little heavier to handle than I was used to.)  Despite it being barely 8am by this point, the couple in the car could not wait for me to turn and repeatedly honked their horn and shouted abuse at me out of the window.  I was not impressed!  There wasn’t much I could do about it though, other than continue to turn the car and move over onto the side of the road as soon as I was facing the right direction.  At least they were shooting off up away from the checkpoint so I wouldn’t see them again (or so I thought).
It didn’t take long to set up the marshal point.  We had a table to pitch, and then half-cups of water to fill and place on the table ready to hand to runners as they came by.  We were at about the halfway point on the run course and at the top of a gradual incline, so I knew the majority of runners would be taking advantage of the water out on the course, especially as the heat of the day had begun to pick up by this point, and I was already considering removing my Go Beyond hoodie before the lead runners came through. 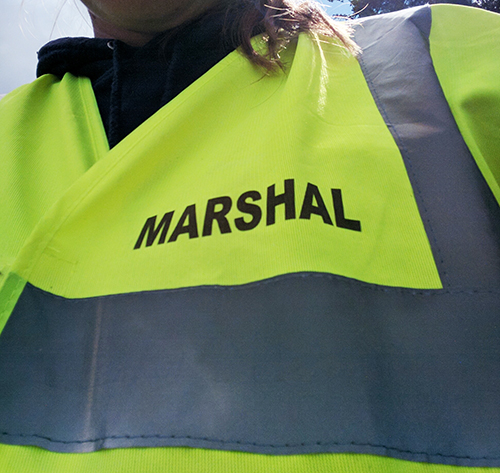 As we were just debating whether or not to fill any more cups, the same car from earlier sped down the road again with their music on full blast and turned onto the grass verge set back on the private land a little along from where I had parked my car.  My car blocked the view of theirs, but even over their loud music Cathie and I could tell that they were having a very serious argument, involving lots of swearing and name calling.  At one point, the woman got out of the car and staggered up the road (in the opposite direction to where the runners would be heading), seemingly drunk whilst on her phone as the guy remained in the car shouting at her to return.
It wasn’t long before she returned to the car and then all we could hear was the sound of loud music again for 10-15 minutes before the fighting resumed.
The land owners drove past at one point and clearly indicated that the couple were parked on private property.  They started their car as if to drive off, but turned the engine back off again as the land owners disappeared back out of sight.
As the woman got out of the car for a second time (this time seemingly looking for Pokemon!) the guy weaved the car backwards and forwards across the road behind her.  As they were finally out of earshot, I quickly called Alan, the run course sector lead and asked for advice.  They had been hanging around for more than an hour by now I was concerned that they would still be weaving in and out across the road as runners came by later and potentially cause an accident or direct abuse at the competitors.  I was feeling rather uncomfortable and vulnerable at the road-side at the still fairly-early hour and needed a bit of back-up!  Alan suggested that as it appeared they were both heavily drunk I call the police.  As I was then starting to do so, the woman got back into the car and they sped off up the road for a final time.  Just in time too, as the front runners were then heading round the corner.
I finally felt like I could relax and do my job properly once more! 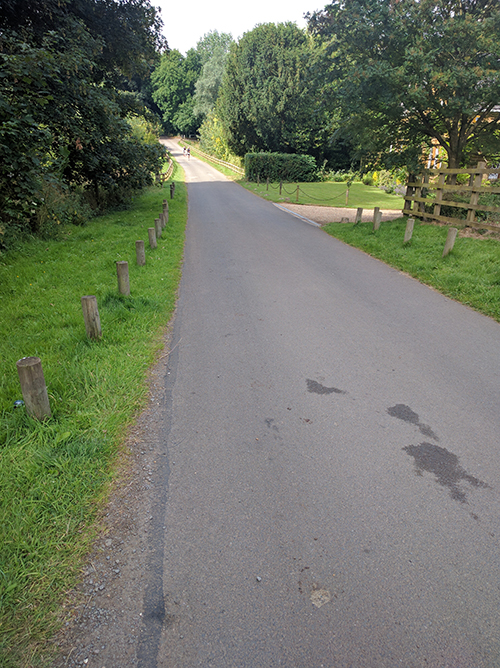 Runners ran up this slight incline towards where I was stood at the water station at the top.  As it was on a hill, their pace had dropped off slightly and I managed to perfect the technique of handing half-filled cups of water to competitors as they ran past without getting anyone too wet! 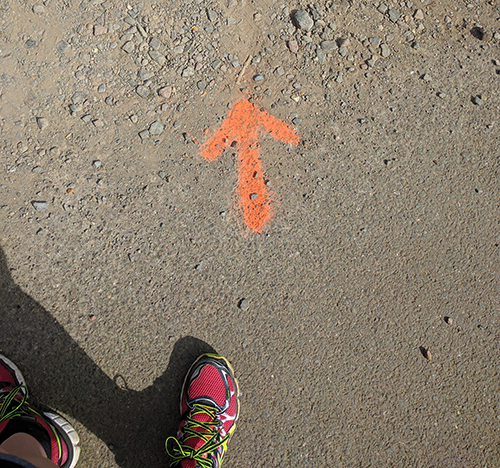 Runners then continued to run past me, along the road, before turning back onto the gravel track that loops around the reservoir.  Cathie stood on the corner collecting thrown cups to be binned. 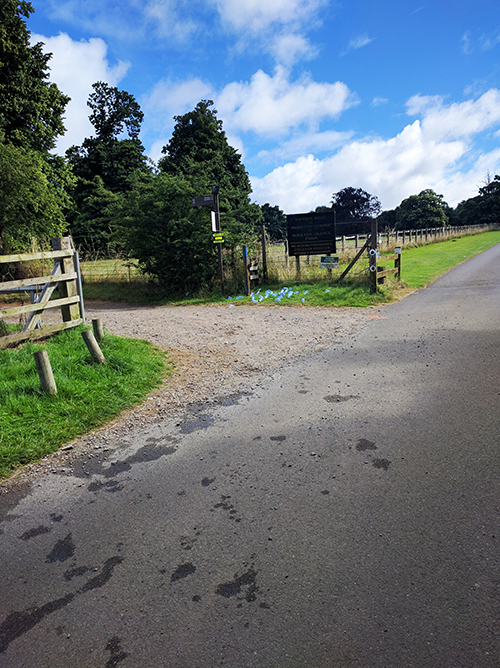 Other than the drunks in the car, our shift went without hitch and after the last runner had passed we emptied the water containers and refilled my car with the now-empty containers, remaining cups and full bin bags before heading back to base where the final runners were now crossing the finish line and presentations were taking place.
I bumped into Sarah here, who proudly showed me her first in Age Category trophy.  Well done Sarah!

Time for a sausage sandwich and hot chocolate before helping to pack away the equipment!
Have you ever felt vulnerable following the actions of others whilst out in the countryside?
Have you tried a tri before?  Or would you be tempted to do so?
Do you prefer water in bottles or cups at an event?

4 thoughts on “Marshaling at Pitsford Triathlon”

Dan and I got together back at the start of 2007 whilst we were both at Staffordshire University and our groups of friends got talking on a night out. After END_OF_DOCUMENT_TOKEN_TO_BE_REPLACED

I have run a number of races since I first started blogging.  I’ve tried to blog about all of the races I’ve entered, and have split them below into the END_OF_DOCUMENT_TOKEN_TO_BE_REPLACED

So who am I?… I’m a 30 year old high school teacher of ICT living in Northamptonshire with my new husband Dan.  We met at Staffordshire University back in 2007 END_OF_DOCUMENT_TOKEN_TO_BE_REPLACED