Our club holds a 5 mile race annually on the outskirts of our home town of Wellingborough.  The ‘Wellingborough 5‘.  A tradition 10 days beforehand is to hold a ‘test’ event, known to our members as the ‘Pre Welly 5 BBQ run’.  This fell last Thursday evening.

The original idea behind the event is that the race organisers can check the smooth-running of the event and it also gives those who will be marshaling the event on the day the opportunity to run the course.  Our chosen club ‘teams’ of runners for the actual race on the Sunday head out on the course to marshal the BBQ run.

And…it gives us a chance to grab a yearly photo of a large majority of our club runners too!

My 5 mile PB of 45:55 was actually set at last year’s BBQ run.  I had a great year of PBs last year.  I’d put in a lot of training and obviously selected the right races to perform well at!  The Wellingborough 5 is a fairly fast and flat course with a lot of PB potential.  It was actually my second 5 mile PB of that year, having secured my first improvement just a couple of months earlier.  2014 wasn’t such a great BBQ run though.  At the time I had been struggling to handle my new addiction to running ultra distances whilst still being able to convert my pacing to short road distances.  You can read about the horror of that run here.

As I’m marshaling at the actual Wellingborough 5 event next Sunday I wasn’t required to marshal at the BBQ run as well.  However, following a lot of thought I decided that it would be wise for me to volunteer to help with the timing on the finish line.  If I raced the BBQ run I knew there would be a good chance that I would push myself too hard, knowing all of the other runners in the event, or that I would be disappointed in trying to pace myself but being unable to do so if the baby wasn’t playing ball.  Both ridiculous at nearly 30 weeks pregnant, but both things I wanted to avoid if possible.  I’m very happy to still be able to run and if that means no races for a few months, just chatty parkruns and social trail running then so be it.  I’m still running! 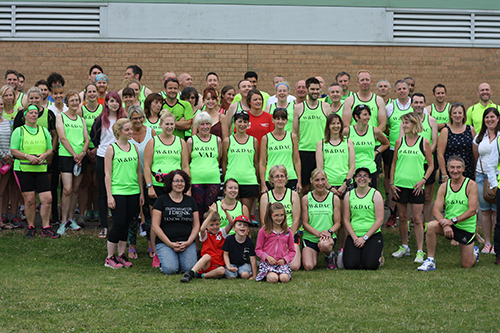 After the group photos the runners were started and I moved along to the finish line along with Laura and Lucia who would also be on the timing station with me.  Laura had the stopwatch, so would call out the times as runners crossed the line and Lucia would chase up anybody whose name we weren’t sure of for me to match the two up and list in the results table. 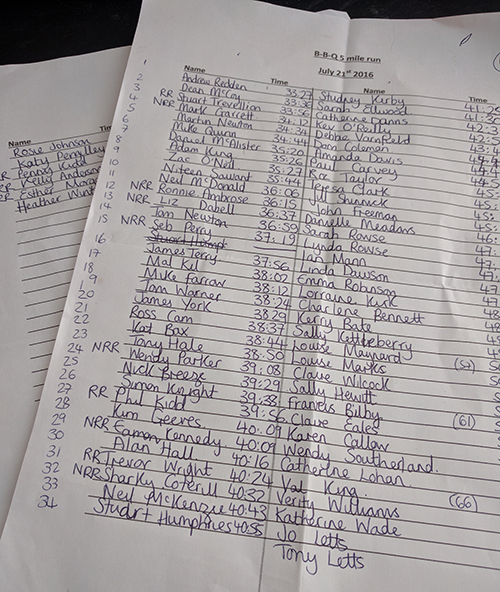 Although I know most of our own members, it is also tradition for us to invite neighbouring club Northampton Road Runners, and this year, for the first time we also invited our even closer neighbours, Redwell Runners to join us for the event. 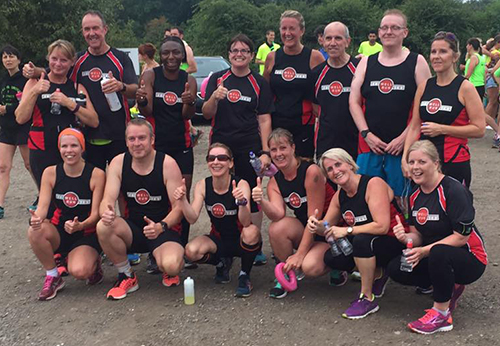 There were a couple of members out on the course with cameras during the event.  I love this shot of some of our runners at the halfway point. 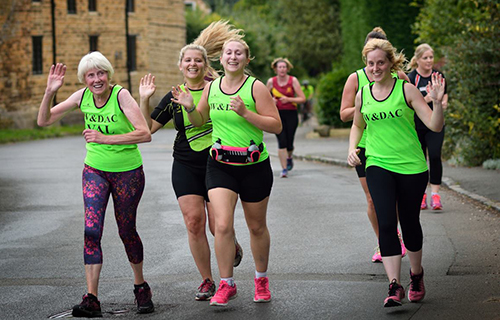 This runner took some really good pictures.  (Photo envy!)  I shall have to enquire about what settings he uses on his camera!

Runners usually finish anywhere between 32 and 62 minutes – with our faster runners marshaling at the BBQ run in order to save their energy for the real race the following week.  Once the last of the runners has crossed the finish line we head inside the Old Grammarian’s Sports Club for drinks and to put food on the BBQs another non-runner has been busy lighting whilst the rest of the runners are out on the course.

With the course all packed up it’s time to concentrate on refuelling and drinking, and then there is always the club raffle, famous for it’s multitude of prizes (pretty much just bottles of wine, with the occasional multipack of fags on the table too!)

Does your club hold any events with other local clubs?
How do you decide when it is best not to race an event?

Dan and I got together back at the start of 2007 whilst we were both at Staffordshire University and our groups of friends got talking on a night out. After END_OF_DOCUMENT_TOKEN_TO_BE_REPLACED

I have run a number of races since I first started blogging.  I’ve tried to blog about all of the races I’ve entered, and have split them below into the END_OF_DOCUMENT_TOKEN_TO_BE_REPLACED

So who am I?… I’m a 30 year old high school teacher of ICT living in Northamptonshire with my new husband Dan.  We met at Staffordshire University back in 2007 END_OF_DOCUMENT_TOKEN_TO_BE_REPLACED