I hadn’t fully decided on which parkrun to attempt last Saturday when a friend sent me a message to say that they were looking for a tail runner at Bedford parkrun.  I had been hoping to tick off another new course (currently looking at the Rutland Water one which is an hour away) but the opportunity to have a go at the new-to-me marshaling position of tail running was too appealing so I dropped the Race Director an email and was assigned the task. 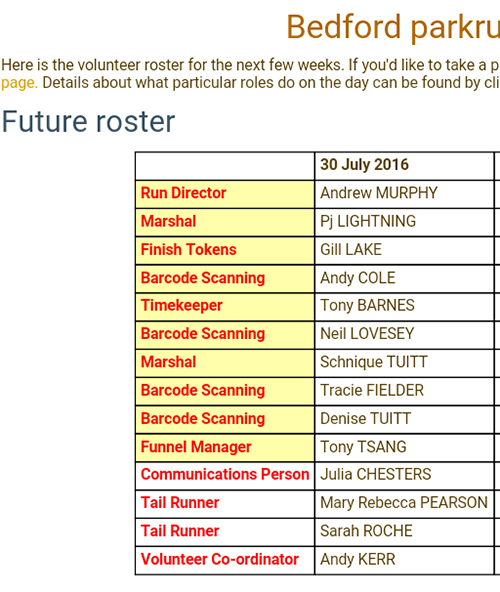 Although there are two of us listed on the roster above, I ended up being the only tail runner on the day.

I was told to arrive by 8:45am for the marshal briefing and to bring along my phone – something which I hadn’t thought of doing but which made perfect sense.  If something happened, even though Bedford park is still very busy with non-parkrunners each morning, it would make sense to have my phone on me so that I would be able to call for help.

The marshals were all super friendly.  I got the impression that the majority of them who I stood talking to at the start were either part of the core marshaling team, or at the very least regularly volunteered to help out at the event on a Saturday morning.  Each of us marshals were issued with a lanyard to wear around our necks detailing all of the information we might need in case of an emergency.  On one side it gave us local information about the nearest hospitals, and on the other it told us the process we should follow if there was an incident, the details of the local cafe, the postcode of the parkrun location and contact numbers for those at the run.  A very good idea and something we could have done with at our own club race on Sunday to be honest, although I’ll get to that in tomorrow’s post. 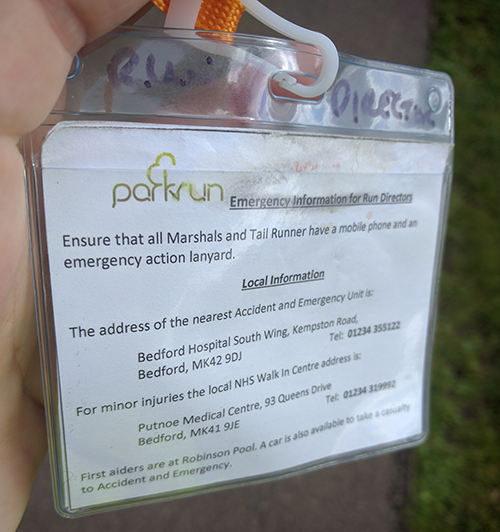 I’ve marshaled a couple of times at my local parkrun – Northampton – before, although not received anything like this.  Picking up lots of good ideas for if I ever manage to get a parkrun off the ground!

Bedford parkrun was a busy one on Saturday as local club Biggleswade had brought 42 members along with them, – many who had just completed the Couch to 5k course and were looking to run their first parkrun.  (35 of them were first timers!)  The course was a sea of blue and yellow Biggleswade tops. 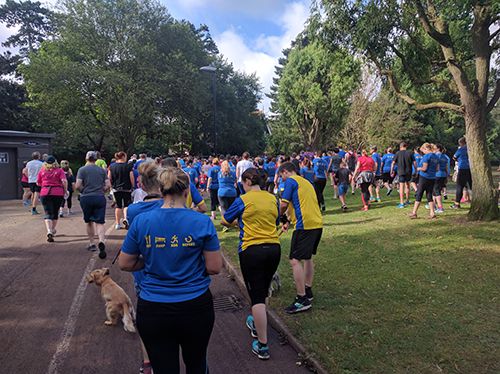 I moved myself right to the very back of the crowd that had gathered and the run was started.  I was very conscious for the first few minutes that I wasn’t at the very back, as several runners appeared to have arrived quite late and ended up sprinting past from behind me.  I hoped that nobody slower than the back runners had started, otherwise I would never know!  I don’t think that was the case though and after five minutes, runners stopped sprinting around us back markers.

It wasn’t until we started that I suddenly realised I’d have to make a decision as to whether or not to run with the person at the back or behind them.  As it turned out though, the very last lady was a Biggleswade Couch to 5k runner, and their coach stayed with them for encouragement, so I backed off and remained a little distance behind them, so as not to put her off for the run. 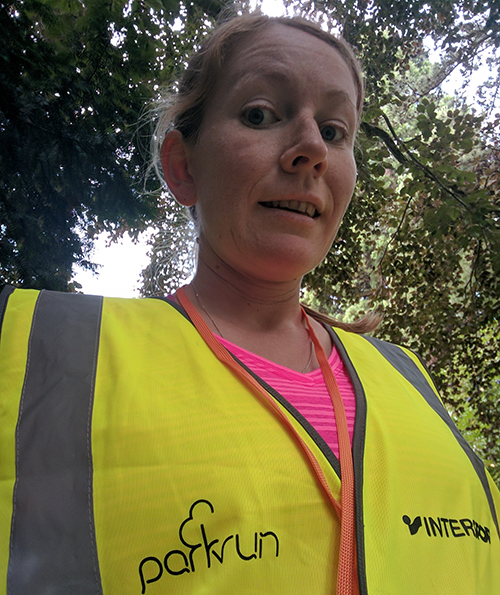 I assumed that I would be able to gentle-jog most of the route, but in actual fact I casually walked the entire way round.  The only point where I got into a little jog was when I had been talking to another marshal right at the start of the run and fell a little way behind.  To be honest though, I would have caught up had I lengthened my stride slightly.

As well as sticking to the back of the run to ensure all was OK with the runners, on the third and final lap (Bedford is a two and a half lap course), I had to collect the km markers as I passed them.  I only found the markers for 2km and 4km, so I worried that I just wasn’t very observant and had missed all of the others, but it turned out that they just hadn’t been placed on the course that week! 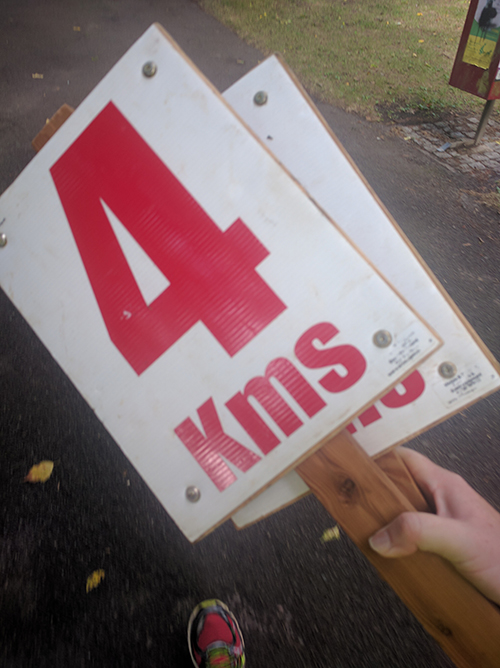 As we neared the end, more and more of the Biggleswade runners came to join the lady at the back and support her on her way to the finish. 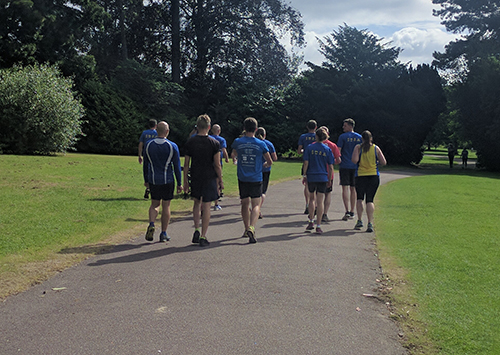 There were more than 20 of them by the time she picked up her pace for the finish line straight.  I had said that the only time I jogged was at the beginning, but I actually jogged through the finish line at the end as well.  Because there were so many Biggleswade runners at the end it got rather confusing as to where my back runner was, but I remained a few seconds behind the large crowd that were storming towards the finish line.  The rest of the support crew ducked out before crossing the line.

I took my token upon crossing the line and headed over to get it scanned, turning just in time to see a lady in a Biggleswade top slowing to a walk behind me.  I couldn’t tell if she had crossed the line or had just been running round the finish line to run in with her friends.  She had slowed to run with the back runner at about one mile, but then picked up the pace and shot off a little, so I didn’t see her out on the course again.  I definitely hadn’t passed anyone else out on the track, but I felt awful just in case she had been waiting on the sidelines with the cheering squad and had finished her run at the end.  I was very diligent in ensuring I had been at the very back but I still worried that I had missed someone.

When I was texted my time later that day I checked on the Bedford parkrun results page and there was an ‘Unknown’ runner listed on the page behind me.  Unknown runners aren’t listed with a time, so I couldn’t check how far that person had been behind me.  (Has it always been that way?  I’m sure they used to still list times of unknown runners?)  I know there had been some confusion with the timekeeper over the number of Biggleswade runners crossing the line at the end, so potentially they had just clicked too many times at the finish.  The results show that I crossed the line 9 seconds behind the coach that had been running with the back runner, so I had stayed a fair distance back.  Although again, I’m not entirely sure that was correct, as I don’t think the back runner had sprinted enough to finish 19 seconds ahead of her coach?  Anyway, I’m certain I didn’t pass anyone else out on the course.  There must have been a slight error in the end results.

Once I had gotten my barcodes scanned I helped pack up some of the cones then began sorting the Bedford parkrun barcodes into the labelled boxes along with the other marshals.  They had a craft box, with holes labelled in increments of 10 so that you could easily sort each barcode into order.  With the full team working on it it didn’t take too long and it wasn’t long after 10am before I was saying bye to the other marshals and heading for home.

If you were at the back of a race would you prefer someone to run with you?  Or behind you?
Do you know anyone that started running via the Couch to 5k course?

Dan and I got together back at the start of 2007 whilst we were both at Staffordshire University and our groups of friends got talking on a night out. After END_OF_DOCUMENT_TOKEN_TO_BE_REPLACED

I have run a number of races since I first started blogging.  I’ve tried to blog about all of the races I’ve entered, and have split them below into the END_OF_DOCUMENT_TOKEN_TO_BE_REPLACED

So who am I?… I’m a 30 year old high school teacher of ICT living in Northamptonshire with my new husband Dan.  We met at Staffordshire University back in 2007 END_OF_DOCUMENT_TOKEN_TO_BE_REPLACED