Yesterday morning at 8am our club held a GO TRI event at Bannatyne’s Health Club in Wellingborough.  The idea was to give people that hadn’t experienced a triathlon before the chance to get to know a little more about the sport, practice having a go at each of the three disciplines and transitions without too much pressure or tiring them out over a long distance.

For the adult event competitors swam 200m followed by an 8km bike ride and then a 1.4km run before heading back through the finish gantry.  The children were split into different categories, but swam either 120m or 160m, followed by a 900m cycle for all, and then finished with either a 600m or 900m run dependent on age.

As I’d volunteered to help several weeks earlier, I was down to time with a team of three others and was given the job of timing the bike course.  All four of us grouped around the side doors to the swimming pool so that we could start our stopwatches at the same point before dispersing to our positions on the course which were all within 100 metres of the pool. 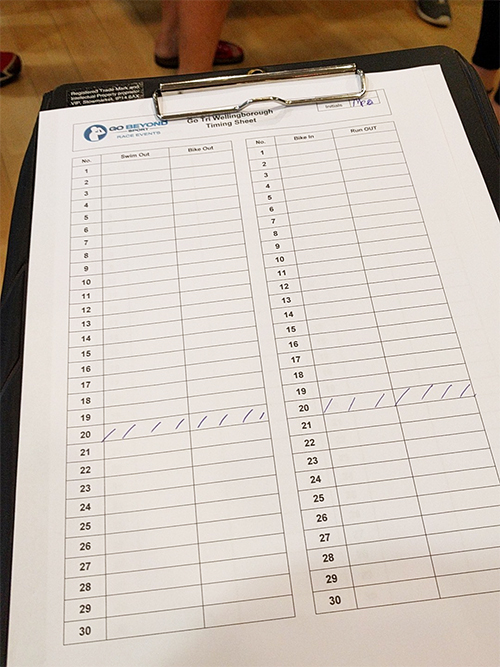 I think I was more nervous about messing up the timing on the stopwatch than some of the entrants were at being in the event!

Stopwatch started and I ambled over to the ‘Bike Out’ section of the course.

Although the event was put on by our club, we were able to use a lot of the Go Beyond triathlon equipment, as Steve (the owner of Go Beyond) runs for WDAC. 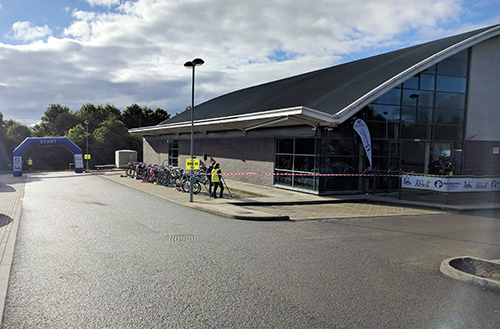 Swimmers would head out from those doors at the front of the pool and along the red and white tape to the left, where the bike racks had been placed.  From there they needed to add their race number, get shoes on, hop on their bike and run past me over the line they had to cross before leaping on their bike for the cycle part of the course.  As they passed the flag I would note down the time on my clipboard sheet so that we would be able to relay to them once they had finished how long they had taken over each of the three disciplines and also how long they had spent in transition between each event. 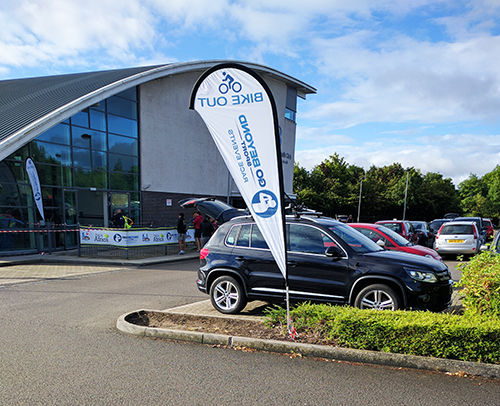 Because the swim was held across two of the lanes within the indoor pool, swimmers were set off two at a time (one in each lane) every 90 seconds which meant it gave me a chance to grab their numbers as they raced past me pushing their bikes.  One by one they all came rushing past, although it wasn’t long before the first of them were shooting back in from the other direction to rack their bikes back up and head out on the run.  I had to also jot down the time they passed me on their way back in too! 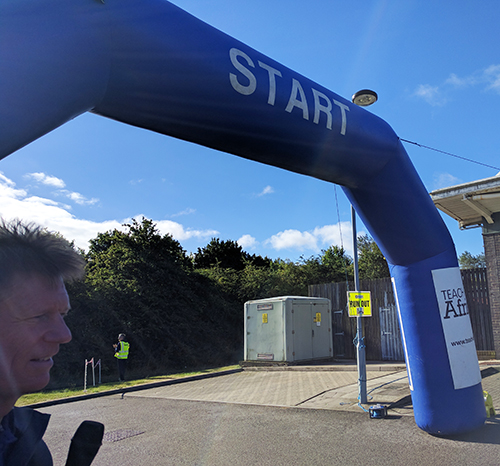 One of the other time keepers was noting the times that competitors went back out in their running shoes and overall times as runners headed off in the other direction under the start gantry for the final of the three parts, so this freed me up to cheer people coming over the line.

The event had just 19 adult entrants, which meant it was fairly easy to manage, and the last of the entrants was back across the line within 40 minutes, giving us enough time to set up for the junior event which was due to begin at 9am. 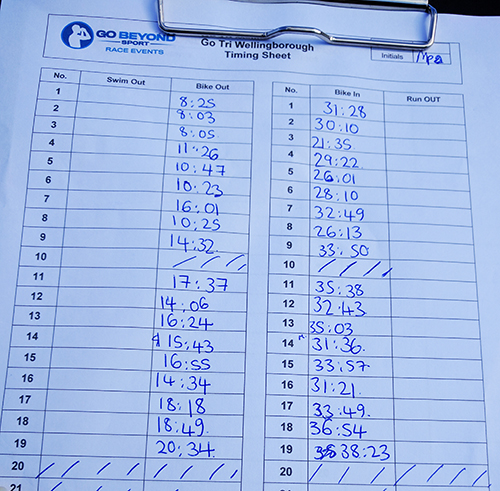 Because the direction the kids headed out on the bikes was different to the way they came back in, I was only able to record their bike out times and someone else caught them as they came back in again.  It was more confusing with the kids event though, as depending on their age, they ran a different number of laps around the leisure centre, which had been drilled into them before they set off!  (Mainly I think to help us when it came to timing…so we knew to record their time if they stopped when they came over the line!)  I’d slightly overestimated how long it would take the kids to finish, and they were all back within 8 minutes of starting!

Quick photo of the adult finishers with medals around their necks… 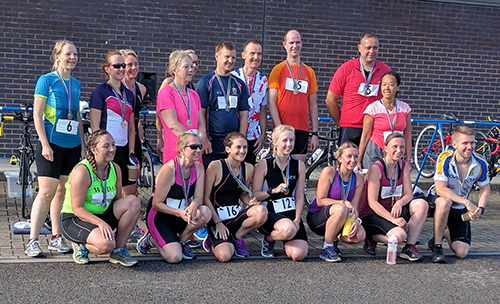 I had arranged to run with a friend after helping at the tri and had said I should be able to head back home again somewhere around 10:30am, but in actual fact we were done and all packed away before 9:30.  An efficient club, us!  😉

Although I’m not as clued up on triathlon rules as I am of the rules at pure running events, I always seem to learn something new each time I marshal at a tri and it makes me more enthusiastic about the sport.

Did you watch any of the Olympic triathlon at the weekend?
Does your club contain many triathletes?

Dan and I got together back at the start of 2007 whilst we were both at Staffordshire University and our groups of friends got talking on a night out. After END_OF_DOCUMENT_TOKEN_TO_BE_REPLACED

I have run a number of races since I first started blogging.  I’ve tried to blog about all of the races I’ve entered, and have split them below into the END_OF_DOCUMENT_TOKEN_TO_BE_REPLACED

So who am I?… I’m a 30 year old high school teacher of ICT living in Northamptonshire with my new husband Dan.  We met at Staffordshire University back in 2007 END_OF_DOCUMENT_TOKEN_TO_BE_REPLACED