dsfI’m pretty sure that the three of us came away with food poisoning last weekend. We’d taken Oscar out to a large indoor play area on Sunday afternoon. He was having so much fun, and we were having so much fun watching him enjoy himself that we completely didn’t realise how quickly the afternoon had flown by until Oscar started to whine that he was hungry, and we realised restaurant feeding options were minimal in the area.
It was a quick trip to the nearest one we could find, where Oscar sleepily, but thoroughly enjoyed chicken skewers with sweet potato fries and corn on the cob. Dan also went for chicken, and I demolished a mushroom burger. 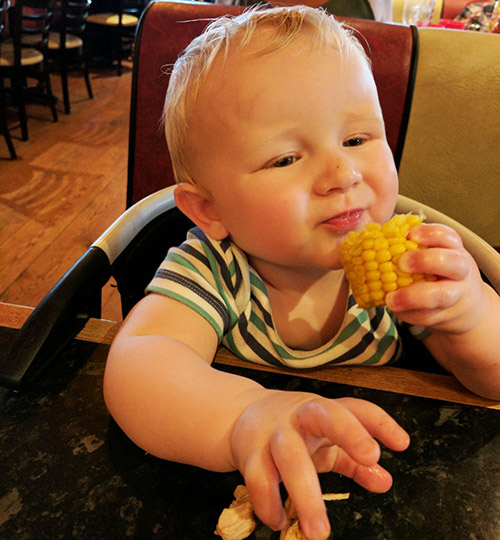 Because Oscar was so tired he left quite a bit of his meal, which is unheard of for him, so we got it boxed up to take home for his lunch the following day.

The next morning, Dan groggily appeared downstairs for breakfast. By that point Oscar had already been through two nappies, and was about to fill his third. Dan managed to force some cereal down but Oscar just moved his breakfast around his tray looking rather sorry for himself.
Fast forward to lunch and, having not yet sussed out the link between the meal from the previous night and our poorly household, I pulled out the remainder of Oscar’s meal for him to have for lunch. When he once again, did not seem too fussed about eating any of it, I placed it onto my plate instead. Sweet potato fries are my favourite!

They are not my favourite any more. And neither is chicken.

I spent the start of last week feeling rough, with a painful crampy stomach and zero energy. I sensibly decided to take a few days off from running until I fully recovered.  It was frustrating not getting out to run during the first week of the Summer holidays, but I knew that there was a good chance that I wouldn’t be able to hit any of my training paces, and would feel rubbish for attempting to do so in the first place.

The Thursday before had been our club’s annual Pre-Welly 5 BBQ run.  Always held 10 days before our club 5 mile road race, the idea is to check over the course, practice our marshaling and to give everybody a chance to run the event who might not be able to on the day if they were marshaling instead.

After a couple of rubbish BBQ runs in previous years I had a great run last year and set a new 5 mile PB of 45:55.  Although it’s not an official race – but instead more of a social event for our club, it is run on the race route, so I’m counting it as a PB!

Having run really strongly since starting my training using the Hanson’s Marathon Method, and having already achieved PBs in 6 mile and 10k events over recent weeks, I was hoping for another PB this year.

It didn’t start well when I arrived feeling knackered and hungry though.  I instantly had doubts for the run and began to talk myself out of it.

When we first set off I looked around and instantly felt like I had placed myself way too far forward, with runners usually much faster than me.  But my heart rate monitor told me that I could run faster, so I carried on. 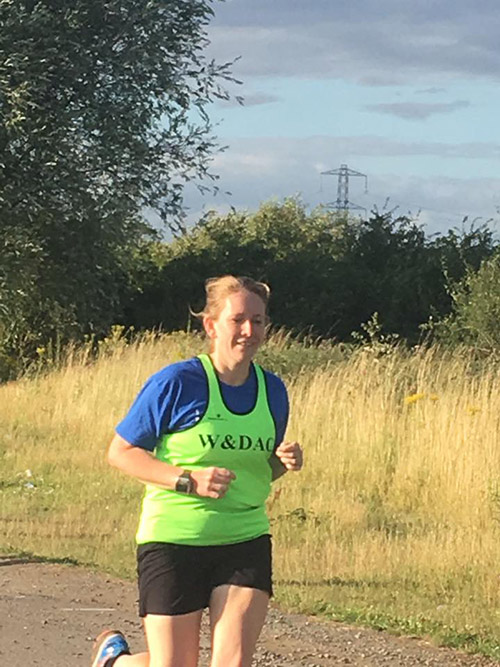 I chatted to a couple of people early on in the first mile.  Again, projecting my doubts about a decent time to them.  Kev came alongside me and commented on how well I had been running just lately.  I told him that I was hoping for a good time again that day – perhaps something around 9 minute mile pace.  I could see him trying to work out the math!  We spent several minutes talking before he nipped into a bush following the pre-run pint of Guinness he’d enjoyed in the bar before setting off!

I had sat behind the same people for the whole run until we hit the slight hill at mile 3.5.  Here, still feeling strong, I managed to gradually pull past other runners one by one.  I probably wouldn’t have been able to hold a full on conversation any more, and this ended up being my slowest mile at 9:07.  (So happy that I can say a mile at this pace was my slowest mile now!)

I overtook a couple more runners who I never would have been able to overtake normally in the final mile and then opened up my stride to power through to the finish.  As I headed towards the finish line I struggled to remember my exact PB time, but knew I was in with a shot of hitting it, and so commented to the Group 4 running coach as I came alongside him, who then insisted we run through the finish holding hands. 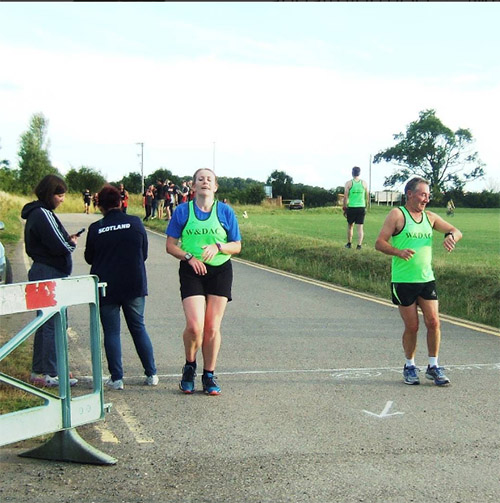 Despite not really looking it in this pic, I was completely comfortable and was barely breathing heavily at all, able to chat and laugh with other runners whilst heading down the finishing chute.  I guess this picture must have been taken literally as I pulled back from a run to a walk.  You can see the official finish line drawn on the floor just behind me.

Although initially disappointed that I didn’t come very close to 45 minutes, having set myself a rough target of 9 minute miling, I soon cheered up when I checked my watch to discover that with the slight over-distance run I had actually ran an average of 8:57 minute miling!  Hanson’s is definitely doing me some good!

For the first time since the BBQ run has been taking place, we didn’t actually have any BBQs.  Instead, a pizza van.  So I waited in line for my turn to demolish a hot, veggie pizza and sit nursing a drink at the bar.  Very satisfying mid-week and with just one day left of the school term.

So that was last week – poorly sick following a good 5 mile race.  This weekend was a little different again.

I started off this weekend by running Kettering parkrun with Laura whilst pushing Oscar in the buggy. 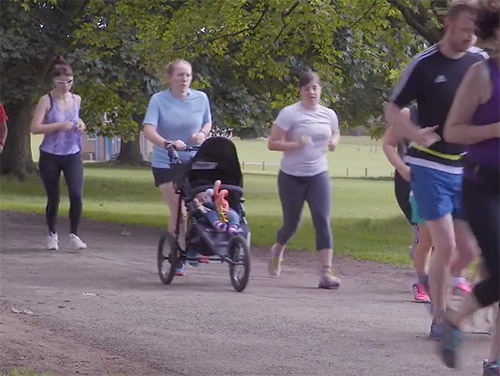 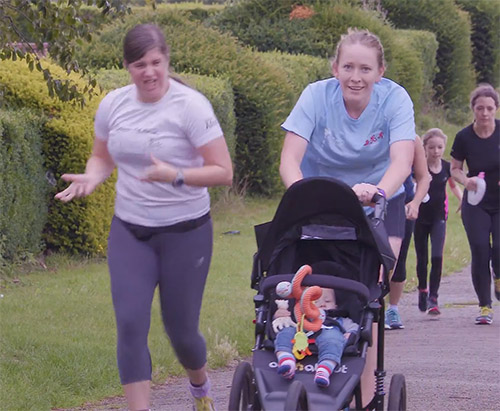 Having come right from the very back of the run and Kettering being a very difficult course to overtake with a buggy, I’m fine with that.  Oscar stayed wide awake for the whole run, gripping onto his Sophie giraffe toy.  Good job, because I didn’t really want to have to keep stopping to pick her up along the way!

I’m hoping that at some point during August I will be able to run a parkrun hard and see what time I am currently capable of.  It’s been a while since I raced a parkrun and I’d like to think I’m a little quicker now.

In the afternoon I headed over to The Garden Deli with Laura and Steph for cake and a catch up.  The cake there is a good.  I went for this lemon and ginger sponge.  I don’t even really like lemon flavoured things.  I can’t stand it when bartenders add a lemon slice in your drink when you go out, but this looked too good not to try. 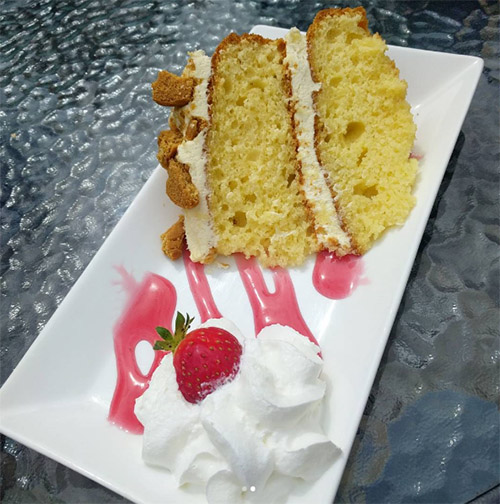 The drinks are also amazing!  I went for a strawberry and vanilla fruit crush and was not disappointed! 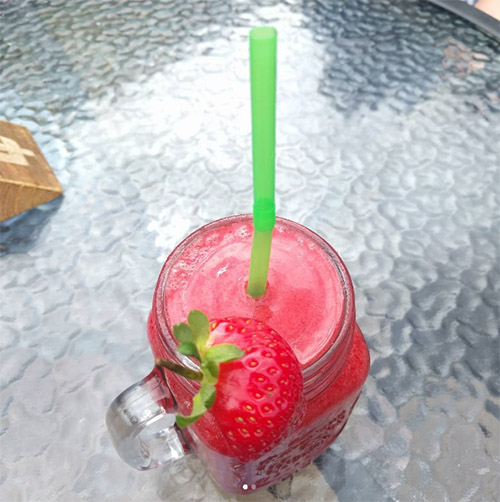 Then yesterday was the actual Wellingborough 5 race.

For the last few years my role at the race has been to direct cars down the driveway and onto the car park before the race begins.  I then take photos of the runners along the first 100 metres of the race, again in the final 200m as well as ensure runners turn safely into the final section along the field at the very end of the race.  There were a couple of other marshals with me at the end this year, which meant that I could take pictures without worrying about where runners were headed.

I played photographer at my club’s annual 5 mile road race yesterday. Thankfully we ended up missing the rain and I think I actually even got a little burnt when the sun came out. The race was a complete sell out and won in 26:12 with the first lady home in 28:58! I can’t even imagine what it must feel like running that fast. #wellingborough5 #welly5 #raceday #sundayrun #speedygonzales

I love taking photos of the event.

Last year a runner suffered a cardiac arrest during the race and was air lifted to hospital, so it was a sigh of relief when all runners were back safe and sound this year.  The club invited Tom, the runner who had been hospitalised following the race last year to our BBQ run the other week, and he finished at a run/walk along with his wife and one of our members who happened to be a doctor who had stopped and helped him on the day.  He finally got the chance to finish the race route! 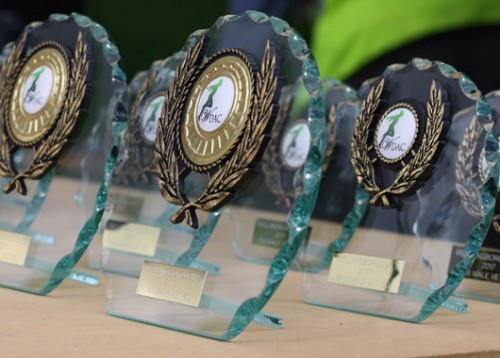 This year I also took pictures of all of the prize winners.  Prize giving always seems to go on for ages.  I couldn’t even dream of ever being good enough to receive a prize at a race. 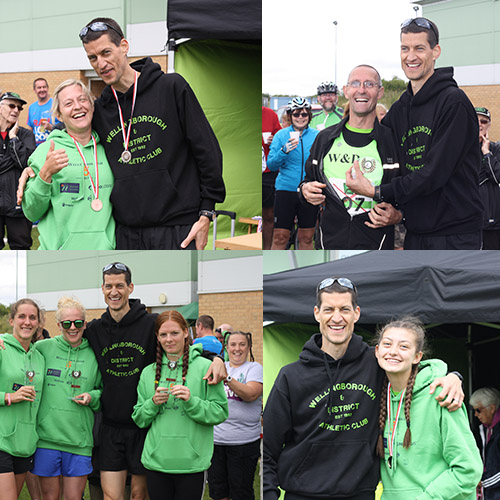 How did you spend your weekend?

Dan and I got together back at the start of 2007 whilst we were both at Staffordshire University and our groups of friends got talking on a night out. After END_OF_DOCUMENT_TOKEN_TO_BE_REPLACED

I have run a number of races since I first started blogging.  I’ve tried to blog about all of the races I’ve entered, and have split them below into the END_OF_DOCUMENT_TOKEN_TO_BE_REPLACED

So who am I?… I’m a 30 year old high school teacher of ICT living in Northamptonshire with my new husband Dan.  We met at Staffordshire University back in 2007 END_OF_DOCUMENT_TOKEN_TO_BE_REPLACED