So my goal marathon for 2017 has always been Mablethorpe.  I’ve run the race three times now (2013, 2014, 2015), the route is pancake flat, the race always seems to attract other runners from our club and I know where to buy the best milkshake from after the race(!)

But, there were a few snags with my target marathon being Mablethorpe this year.

Recently, after a long discussion with Dan we made the decision to have Oscar Christened.  Because both of our families are a two hour drive from where we live it made sense for us to combine Oscar’s Christening with his first birthday celebrations and the date suggested to us by the Vicar was October 1st – conveniently a date all three Godparents could make too.  Something we thought might be an issue, knowing how busy the weekends in all three calendars get!

So Mablethorpe is off the cards.  If I did rock up to the start line for 9:30am on September 1st, I doubt very much that I would be able to run 26.2 miles, shower, change and drive the 90 miles back for the ceremony at 10:30am.

No, the easiest thing to do would be change my target marathon so I’ve decided to run Chelmsford marathon again.  Which to be honest (don’t tell Dan) I’d already decided to do anyway.  Partly as a backup in case I fell short of my target at Mablethorpe, and partly to tick off another marathon from the list, getting ever closer to that magic 100 marathon number.  I used Chelmsford as my backup marathon in 2015 after my Mablethorpe sub 5 attempt didn’t go to plan.  (That year I literally returned home from Mablethorpe, searched for nearby marathons that were taking place a fortnight later and had booked Chelmsford within minutes of waking the following morning.)  In that scenario the plan worked, and I ducked under the sub 5 bracket by 6 minutes.

This time I want more.

Chelmsford marathon falls three weeks later than Mablethorpe did.  On the 22nd October.  Swapping my target race will allow me to run hard at Ealing half marathon towards the end of September and still recover enough in time to race hard at the marathon.  (That’s the plan anyway!)

I am kind of sad that I won’t be running Mablethorpe again this year (and also missing the opportunity to add another marathon to my tally), but I will be back.  It’s a lovely race with great marshals and a super flat course.  You run right alongside the beach twice on the route and last time I ran, there was somebody there handing out little bags of seaside pic ‘n’ mix.  Winner!

The last couple of weeks of marathon training have been a bit sporadic so having those extra three weeks now is reassuring.  The final week of term was a fairly busy one for me and I was working late or attending leaving dos most evenings.  The Saturday of that week I headed to Rushmere parkrun (new course for me!) before a friend’s hen do, and the following week saw Dan, Oscar and I all end up with food poisoning following some dodgy chicken during a meal out.  Rubbish!

Quick recap of the Rushmere parkrun, as I’ll kick myself if I don’t write about it and there were some pretty nice pictures on their Facebook page too. 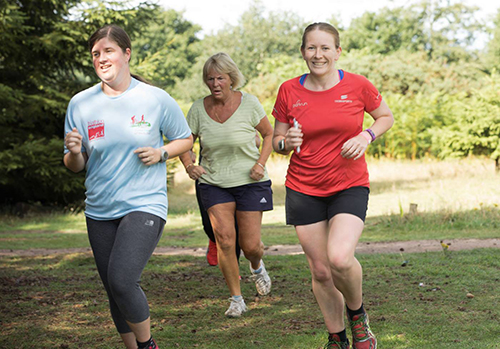 Rushmere was my 86th parkrun and 13th different course.  I ran with Laura and as per most parkruns we just chatted our way round. 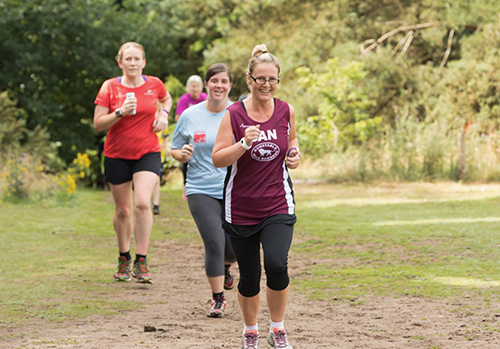 Dan has promised to take Oscar on a Saturday morning soon though so that I may run a parkrun hard once more! 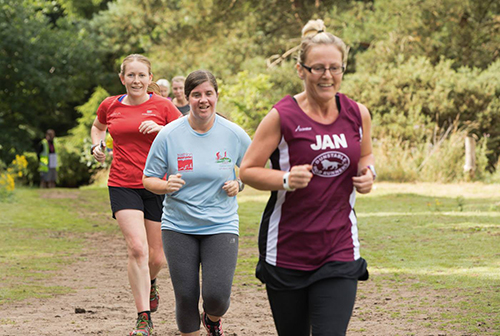 Laura and I had an afternoon at Go Ape planned as part of a friend’s hen do, and I’m a bit of a wimp when it comes to heights so I needed to save a bit of energy to get round the high ropes course at Woburn! 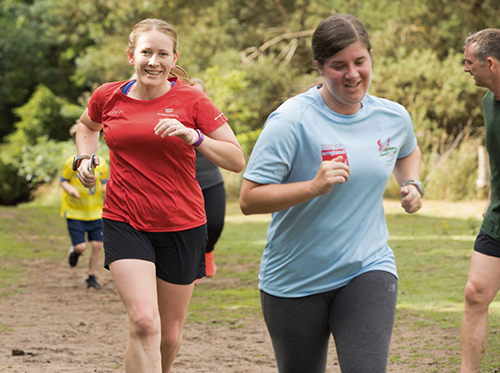 Rushmere is a lovely off-road two-lap course, with friendly marshals providing banter rightthe beginning at the event briefing.  The absolute best thing about the Rushmere parkrun though is that it has a PB gong!

PB gong at #Rushmereparkrun this morning. Not technically a parkrun PB but as this was a new-to-me parkrun it was a course PB! #PBgong #loveparkrun #5k

Technically it wasn’t a parkrun PB for me, but it was a course PB (having never run the course before, so I leapt at the chance to ring the gong!  I think the gong should be part of the mandatory kit when a new parkrun course starts up.  I’d want to run faster just to have the opportunity to ring it at the end  I wouldn’t have a clue where to start looking when it came to buying one of these though!

After parkrun, it was Go Ape. 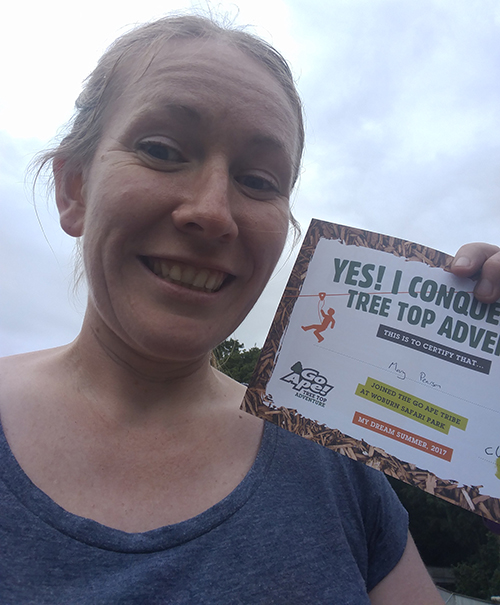 And After Go Ape it was time for a quick flick with the wet wipes and a dress thrown on before getting glammed up for Afternoon tea. 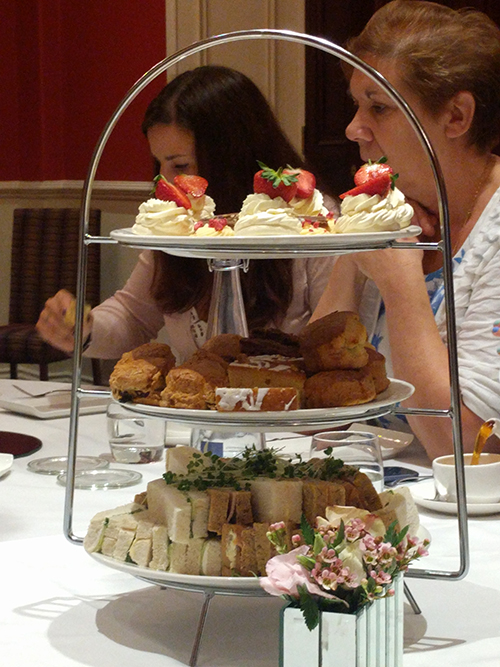 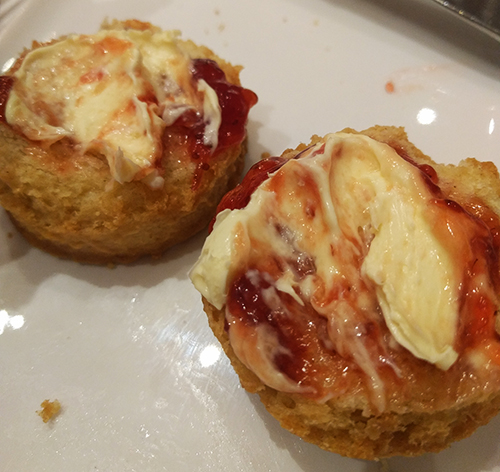 This week I’m back on target with my training again.  I even made it out to a club training session on Thursday night which I haven’t been able to do in ages!  (Baby logistics as Dan doesn’t return home from work until 6:20pm and club starts at 6:30.)

I’ll sit down with my training plan on Sunday and tweak it slightly to reflect the extra weeks I have now gained before race day, and also the week of training I missed when I was ill.  I knew I wouldn’t be able to stick 100% to the Hanson’s Method when I started training, but the elements I’ve incorporated have definitely been doing me some good.  Not only have I PBd over three different distances just lately but I generally feel stronger and healthier.  I’m looking forward to seeing what else I can achieve during this training cycle!

Have you visited Go Ape?
Jam then cream or cream then jam?!

4 thoughts on “A slight change of marathon plan”

Dan and I got together back at the start of 2007 whilst we were both at Staffordshire University and our groups of friends got talking on a night out. After END_OF_DOCUMENT_TOKEN_TO_BE_REPLACED

I have run a number of races since I first started blogging.  I’ve tried to blog about all of the races I’ve entered, and have split them below into the END_OF_DOCUMENT_TOKEN_TO_BE_REPLACED

So who am I?… I’m a 30 year old high school teacher of ICT living in Northamptonshire with my new husband Dan.  We met at Staffordshire University back in 2007 END_OF_DOCUMENT_TOKEN_TO_BE_REPLACED