So, as I mentioned yesterday I have fallen in love with the game Fetchpoint and it did dictate where I went out for a run yesterday morning!

I didn’t get out for a run whilst back at my parents, so initially intended on just heading out for a 2-3mile run yesterday morning and then going to club for speedwork in the evening.  But the weather was so nice I couldn’t bear to turn back and head home when I got to the 3 mile point!

Instead I continued and didn’t make it back until I had reached nearly seven miles.  I had no real ‘aim’ for the session (other than to pick up two Gore-illas from the Fectpoint game!) and intended on taking it easy, as long as I was sub 11:25mm pace (the pace I need to be at to get a Sub 5 marathon).

Despite it being quite a hilly route and some off-road work, towards the end I still had a lot left in my legs so worked on quickening my pace and comfortably ran more than half a mile at 9:15 pace.

Breakfast was served on my stomach as soon as I arrived home!  Peanut butter on bread and butter x2. 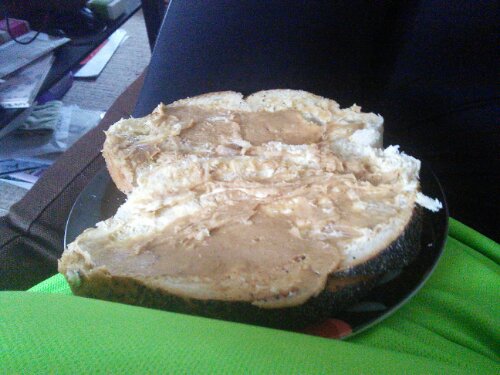 I spent some time ‘Spring cleaning’ and catching up on housework after returning from my run as I’d spent the weekend away and it never gets done when Dan’s home alone!

Then for lunch I roasted a big dish of veg – one red pepper, one parsnip, one carrot, two spring onions, four cherry tomatoes and some corn. 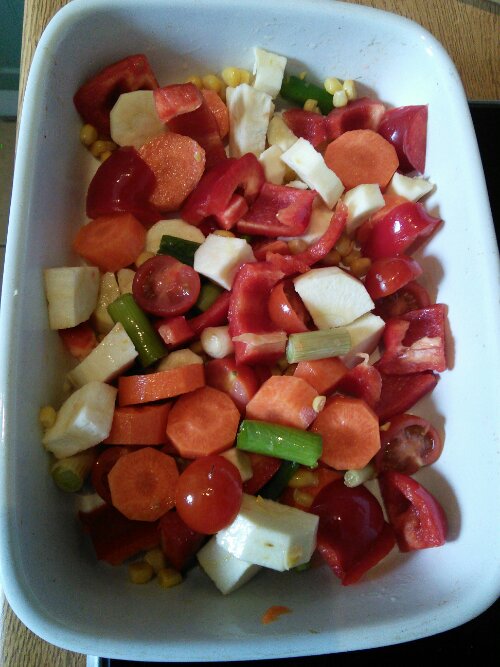 Then topped it off with some tomato pasta sauce and goat’s cheese.  This has to be my favourite meal of ALL TIME! 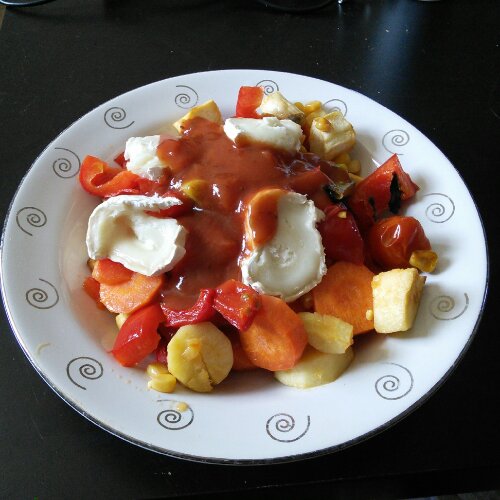 I ended up having lunch quite early so that I could get on with my day.  I had a doctor’s appointment booked in at 5pm – just for a pill check.  Usually at these I am told the same things.  That I have an excellent resting heart rate (being a runner does that!) and that I am in the obese section of the BMI chart.  Today, all that changed though when I was asked to jump onto the scales for a weight check.  I asked if I should remove my boots and big coat before getting on and the nurse told me ‘not to worry, as it was obvious I didn’t have a weight problem’, and then when she updated my weight on the system told me that I had actually lost a few kgs since my last weigh in.  Bonus that I hadn’t been expecting!

After walking back from the Doctor’s, I was ready for tea so started prepping the pizza base for a calzone I had been thinking about all day.  I used this recipe for the dough, let it rise whilst cooking sausages on the hob, then filled the calzones with marinara sauce, grated cheddar cheese, chopped sausages and mine with some sweetcorn.  I added a side of mixed leaves onto my plate as well. 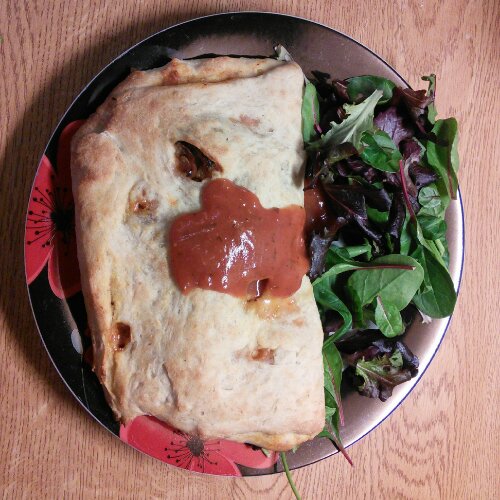 This was amazing.  Dan agreed.

But there was too much of it.  I could easily have gotten away with making just one of these and halving it with Dan for tea.  That’s the plan for next time.

**How I Met Your Mother Spoiler alert** -I’ve tried to keep it as vague as possible!

Over tea we watched the Season finale of How I Met Your Mother.  Both Dan and I have been massive fans since the beginning, but have both really felt that this last season has been dragged out forever.  Plus, Robin and Barney getting married?…What?!

The finale was great though, and despite throwing a few curveballs in (divorce, death and getting together) I loved it.  I wasn’t a big fan of the last curveball right at the very end and felt it cheapened a relationship that had been built up throughout the whole show.  I also felt that I had already seen some parts in other season finales…Revealing of the name (Sex and the City), getting together right at the very end (Friends).  It definitely didn’t leave the show feeling unfinished though, and I was much more satisfied with the ending than I was with Dexter.

Did anyone else see How I Met Your Mother?  Any thoughts on the finale? 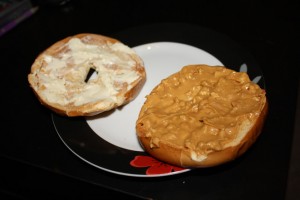 I had trouble sleeping last night.  I was pretty tired and went to bed early.  This meant that I was wide awake by 1:30am (don’t check my last blog post time!) and didn’t head back up to bed for another couple of hours – spending the time finding new blogs and applying for a job for September.

When I got up AGAIN at 6:15 I fancied more than the frozen yoghurt I had planned and 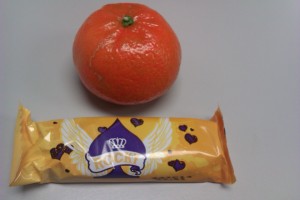 instead had a toasted bagel with half crunchy peanut butter and half white chocolate spread.

My lessons went by quickly at work today.

It was the turn of one of the Psychology teachers to bring in Friday treats today, but due to Red Nose Day events and various other happenings there ended up being only three of us meeting up at break.  I had a white bread roll with a ham slice inside, a mini sausage roll dipped in jalepeno houmous (this was really hot!) and a satsuma and Rocky bar (I managed to get a picture of these last two after shooting off for my period 3 year 8 lesson.  I also had a small cup of raspberry and cranberry 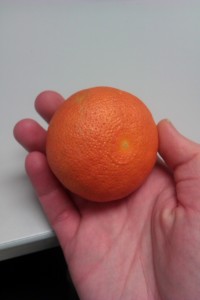 At lunchtime I grabbed a tangerine.  I’ve still got two more of these left and it was a massive pain to peel today!  The skin was all stuck to the actual fruit and my hands were covered in orange juice…it was pouring down my hands! 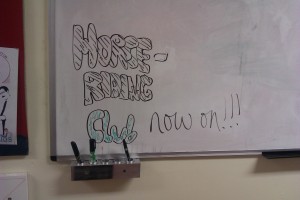 After school on a Friday I run Riding Club for years 7-9s.  Every other week we go to the stables.  The other weeks I run a stable management/horse knowledge session at school.  The kids normally leave me a message on the board whilst waiting for me to get the registers sorted and see the other kids on the bus off to the stables.  This was today’s message! 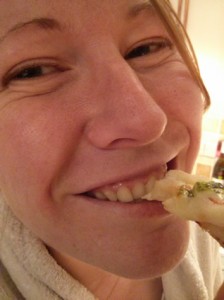 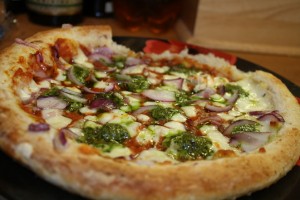 I was planning on a short run after work but decided against it when I got home.  I’ve got a long slow run of 18 miles planned for tomorrow and a 5k race (which I won’t race) on Sunday morning so decided to give my legs a rest tonight.  Instead I put in a Dr Oetker vegetarian pizza.  Anything with pesto or goats cheese is a winner for me!  Thinking back earlier, I had never had a pizza until I went to Uni at age 19 and even now I would never choose one if we went out for a meal – it’s purely a lazy time thing.  These only take 10 mins in the oven. 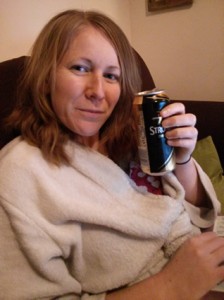 I’m now wrapped up in my dressing gown enjoying a Strongbow with Dan whilst watching the Comic Relief coverage on BBC after having completed the fifth day of my 30 Day Shred.  So far watching Comic Relief has prompted such Google searches as “How old is Lenny Henry?” [54] and “Where does Rowan Atkinson live?” [Apethorpe, which is actually less than 20 miles from where we live!]

Who knows what other Google searches we’ll complete tonight!!!…

Dan and I got together back at the start of 2007 whilst we were both at Staffordshire University and our groups of friends got talking on a night out. After END_OF_DOCUMENT_TOKEN_TO_BE_REPLACED

I have run a number of races since I first started blogging.  I’ve tried to blog about all of the races I’ve entered, and have split them below into the END_OF_DOCUMENT_TOKEN_TO_BE_REPLACED

So who am I?… I’m a 30 year old high school teacher of ICT living in Northamptonshire with my new husband Dan.  We met at Staffordshire University back in 2007 END_OF_DOCUMENT_TOKEN_TO_BE_REPLACED