I woke up at 1:30am again this morning – went to the toilet, got a drink, headed downstairs and finished making the cake pops I began last night.  I wasn’t feeling great.  My head was all cotton woolly!

Before going to bed last night I made 12 chocolate buns and left them to cool overnight.  When I got up at a crazy time this morning I crumbled these into a bowl. 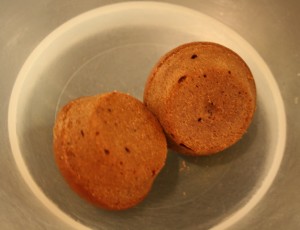 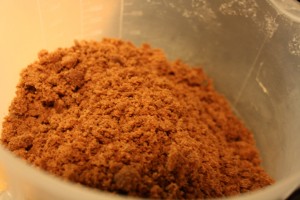 I mixed up some chocolate buttercream icing and tipped the bowl of cake crumbs in before rolling them into 17 large balls and leaving them to harden, before dipping them into melted white chocolate.  I might have had a nibble on one or two of these throughout the day and also had the licks from the bowl! 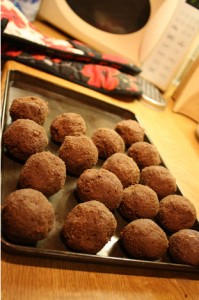 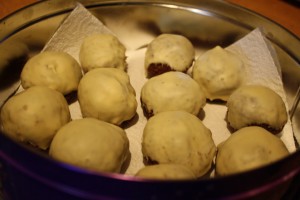 I went back to bed and got up again at 4ish.  Still feeling pretty rubbish.  Back to bed again and then up at 7 when my alarm went off to get ready for the race.  At this point I still intended on racing, so forced myself to eat a peanut butter bagel even though I really didn’t fancy any food at this point. 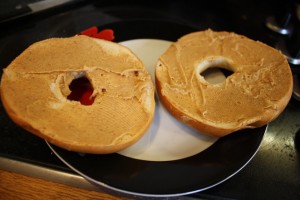 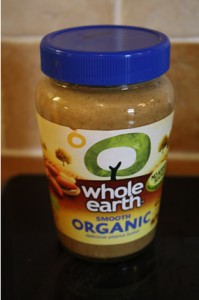 On my shopping trip yesterday I picked up the Wole Earth Organic peanut butter that I ate at my Mum’s house last weekend.  It cost about £1 more for a much smaller jar, but is much tastier.

At about 9am I crawled back into bed and made Dan decide my fate on whether I should run or not.  I had a really bad headache by this point and felt so tired and rubbish.  He rightfully told me to go back to sleep and not even think twice about it.  It wasn’t the answer I wanted to hear, but was the answer I needed to hear. 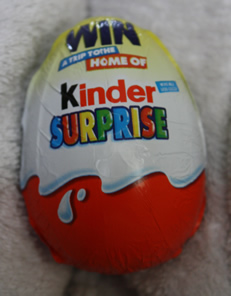 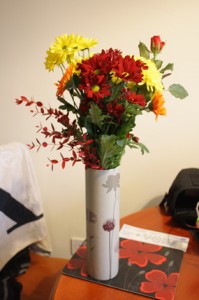 I didn’t fancy any lunch, but when Dan nipped out to put some money onto the electric he brought me back a Kinder egg and a bunch of flowers.  BEST BOYFRIEND EVER! 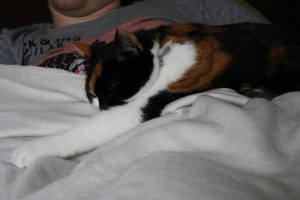 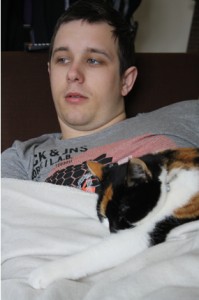 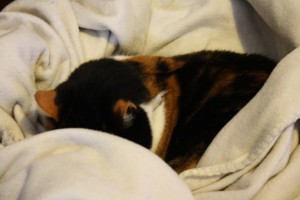 Dan then proceeded to watch the footy while Bella made herself as cute and as warm as possible and I sat on the floor attempting to get through some of my year 7 folder marking.

When Dan went off to play football at 3:30 I got myself together a bit, tidied up downstairs a little, did day 7 of the 30 Day Shred and began to cook dinner.  I can’t believe I’m a week in already!  I can notice the difference in my abs now and I think my biceps are a little more defined.  I can probably quote Jillian Michaels word for word on the DVD and I’m looking forward to starting Phase two.  I’ve been taking the DVD upstairs when Dan’s watching TV, or closing the curtains and playing it in the lounge when he’s not around!  I get hot quite quickly while I’m working out so often end up in my pyjama trousers and bra!  Good job I have blackout curtains in the lounge! 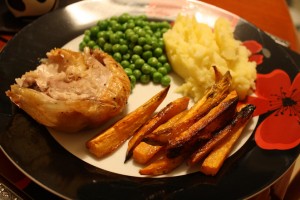 For dinner I cooked a roast chicken – with the intention of using the rest of the chicken for meals this week.  We also had mashed potato, roasted sweet potato and a side of peas.  I could easily have gone without tea tonight as well, really not feeling hungry still.  Hopefully feeling better tomorrow.  It’s year 9 exams this week so at least I will have a few less lessons to worry about tomorrow and Tuesday.

Dan and I got together back at the start of 2007 whilst we were both at Staffordshire University and our groups of friends got talking on a night out. After END_OF_DOCUMENT_TOKEN_TO_BE_REPLACED

I have run a number of races since I first started blogging.  I’ve tried to blog about all of the races I’ve entered, and have split them below into the END_OF_DOCUMENT_TOKEN_TO_BE_REPLACED

So who am I?… I’m a 30 year old high school teacher of ICT living in Northamptonshire with my new husband Dan.  We met at Staffordshire University back in 2007 END_OF_DOCUMENT_TOKEN_TO_BE_REPLACED