Life is possible without a TV.

I remember being in year nine and my Spanish teacher telling us that she didn’t have a TV. We were all amazed. What did she do in the evenings? Why didn’t she have a TV? Who doesn’t have a TV?!

Yet today I found myself telling my year nines almost exactly the same!

Go ahead, think I’m weird-but I generally find what’s on offer to be mostly pretty pants and I’d much prefer to head out for a run or have an actual conversation with my fiancé.

We have Netflix so that we can watch series together (might have gotten a little addicted to Dexter towards the end of last year!) and I have kept up with EastEnders and Casualty since I was a kid, but all through iPlayer. Not on live TV. I would have missed every episode if I had to stick to the BBC schedule! For the first eighteen months we lived together we didn’t bother to get a TV licence. What was the point? But then Dan thought he might like to watch the occasional live footy game on the TV so we paid for a licence and stopped the TV licencing people calling us every month to see if we’d bought a TV yet! Waste of money though. I think he’s watched two matches since!

I discovered that one of the other teachers at my school doesn’t have TV either which I was surprised to hear as she has two young children both in primary school. She told me that they are much more likely to head outside in an evening than her nieces and nephews are which I think is great. My brother and I grew up in a small village but would always be out on our bikes when we were younger, or climbing trees, or off exploring.

I honestly don’t know where I would fit TV time into the week. The only time I watch EastEnders or Casualty is when I put it on my laptop in the kitchen to wash up to! And then I watch each episode over a couple of days!

In other news I’m looking forward to showing my friends Vick and Alex the Parkrun ropes tomorrow! 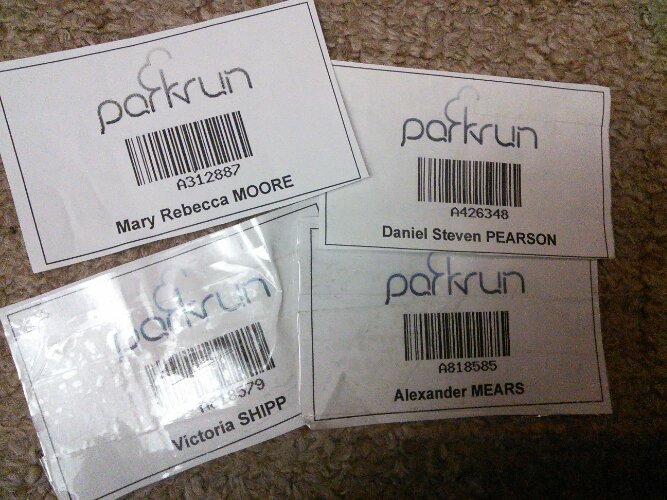 I hope it will turn into a regular social meet up. Much healthier than their normal suggestion of a restaurant!

Dan and I got together back at the start of 2007 whilst we were both at Staffordshire University and our groups of friends got talking on a night out. After END_OF_DOCUMENT_TOKEN_TO_BE_REPLACED

I have run a number of races since I first started blogging.  I’ve tried to blog about all of the races I’ve entered, and have split them below into the END_OF_DOCUMENT_TOKEN_TO_BE_REPLACED

So who am I?… I’m a 30 year old high school teacher of ICT living in Northamptonshire with my new husband Dan.  We met at Staffordshire University back in 2007 END_OF_DOCUMENT_TOKEN_TO_BE_REPLACED